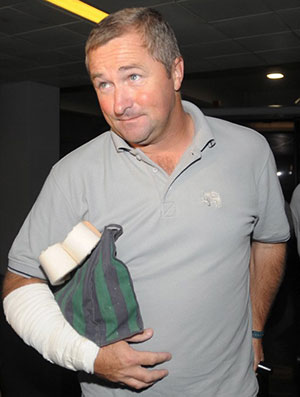 Sri Lanka’s former assistant coach and Yorkshire’s current second XI coach Paul Farbrace is scheduled to assume duties as the national cricket coach in the New Year. The 46-year-old Englishman has already signed a two-year contract with Sri Lanka Cricket, and will be in charge of the team during a crucial period, where two World Cups will be played — the World T20 in Bangladesh in the first quarter of 2014 and the ODI World Cup in Australia/New Zealand in 2015. Furthermore, Farbrace will be overseeing a team that would be in a transitional period, with a number of senior players approaching the end of their stellar careers and a number of younger players fighting to fill their shoes.

The presence of senior pros like Mahela Jayawardena, Kumar Sangakkara and Tillakaratne Dilshan in the team is said to have influenced the choice of Farbrace over the local aspirant, Marvan Atapattu, who is the assistant coach of the team, to replace the outgoing coach Graham Ford.

Not too long ago, former captain Atapattu shared the same dressing room with the likes of Jayawardena and Sangakkara, and famously retired from the game frustrated, calling the then selectors a bunch of puppets. He was virtually made a water boy at the 2007 World Cup under Jayawardena as captain. Atapattu may have buried the hatchet; however, the people in the committee in charge of head-hunting for a new coach have decided that Atapattu’s time will come after the seniors quit the game.

Farbrace appears to be the right choice. The former wicketkeeper-batsman for English counties Kent and Middlesex may not have the playing experience at the highest level, but as a coach, he has a proven track record. Great players necessarily do not make great coaches, and great coaches have not been necessarily great players. This is a fact proven by former Sri Lanka coaches Dav Whatmore and Tom Moody.

Farbrace has coached the England women’s team, England under-19, Kent and Yorkshire’s second XI, in addition to functioning as Sri Lanka’s assistant coach under Trevor Bayliss for two years, before becoming Kent’s director of cricket. Enough credentials indeed. He is also known as a hard-working coach, one who pushes players to their limits.

His near-death experience with the Sri Lanka team during the brutal terrorist attack in Pakistan also factors into the equation. It is said that adversities bring people together. Those who face a difficult situation together tend to stay together, and understand one another perfectly. A picture of Farbrace with a heavily bandaged hand was widely used by the media after the attack, and it was really an endearing one to the public, especially to Sri Lanka cricket lovers.

Farbrace’s first spell with Sri Lanka from July 2007 to August 2009 was memorable and eventful. A cursory look at the International Cricket Council’s team rankings will reveal that the Bayliss-Farbrace union produced cricketers who made a habit of winning.

"It’s nice to know people think that I did a good enough job the last time I was there (in Sri Lanka)," Farbrace said recently. "I think we rose to number two in the Test rankings and number two or three in the ODI rankings, so it was a successful period. We were in the final of the World T20 just before I went and then went on to making it to the final of the World Cup too."

In the period Farbrace speaks of, Sri Lanka were ranked second in both Tests and ODIs, and Nuwan Kulasekara occupied the top slot in the ODI bowlers’ rankings, but today, Farbrace will be taking charge of a team that is struggling to be amongst the top four in both Test and ODI cricket. Sri Lanka is ranked sixth in Tests and fifth in ODIs.

Sri Lanka’s quest to be a top Test team and feature in the World Test Championship has become a pipedream. The lack of Test matches surely affects the country’s rankings, but that scenario is beyond the control of the players or the coaches. Only the gentlemen at the cricket board can address the issue. However, to the credit of the players, Sri Lanka continues to be the number one team in T20 cricket.

When Farbrace was second in command, and months before his departure (Farbrace declined to sign a fresh contract with SLC), Sangakkara was appointed captain. It is said that the southpaw was instrumental in bringing in former opening batsman Chandika Hathurusingha to the coaching setup as a shadow coach — a position created specifically for Hathurusingha. The cricket bigwigs at the time, on more than one occasion, made it known that Hathurusingha would be the future Sri Lanka coach. How comfortable or uncomfortable Farbrace was with that sudden appointment of a shadow coach, it is unknown. Did he feel undermined or cold-shouldered?

What we do know is that Farbrace did say ‘yes’ to Kent when the offer came his way and Sangakkara put his close friend Thilan Samaraweera under Hathurusingha’s wings, and the shadow coach made an ODI batsman out of the specialist Test batsman. Samaraweera played his first ODI in four years back then and went on to play in the World Cup tournament in 2011.

At this juncture, it is pertinent to pay attention to some remarks made by Farbrace’s former boss Bayliss when he resigned after the World Cup.

"On the field, we’ve done pretty well for past 18 months," Bayliss said before leaving the island. "Getting to the World Cup final itself is an achievement, though we lost.

"Good teams like Australia usually have got strong or good management backing the team up. That’s an area in which we can improve here. I am constantly amazed how well the players do (on the field), with all the distractions put in front of them. It seems to be the subcontinent way. That’s a skill in itself."

Farbrace needs to be given the freedom to function as the head coach. As someone well exposed to professional cricket coaching in England, he is sure to work without longstanding sub-continental traits such as prejudices, bias and favouritism. It would be welcomed if the cricket administrators and the sports minister do not interfere with coaching affairs. Farbrace surely does not need people breathing down his neck all the time.

Cricket administrators’ attitude and treatment of coaches need to see a radical change too. In January 2012, SLC sacked the national coach Geoff Marsh just after four months of his appointment. SLC is yet to state the reasons for dumping Marsh in such embarrassing manner. The board recently paid Rs. 15 million to Marsh after the former Australian cricketer went to court. Just before the 2011 World Cup, the cricket interim-committee appointed by the sports minister got rid of Hathurusingha, who was once tipped to be the future Sri Lanka coach, for allegedly disobeying orders from its chairman D.S. de Silva. And as recently as August, the national fast bowling assistant coach Prabath Nissanka resigned after SLC had refused to grant him leave to follow an advanced coaching course in Australia.

At no time should Farbrace feel as though he is walking a tightrope, if he is to succeed and go the distance.