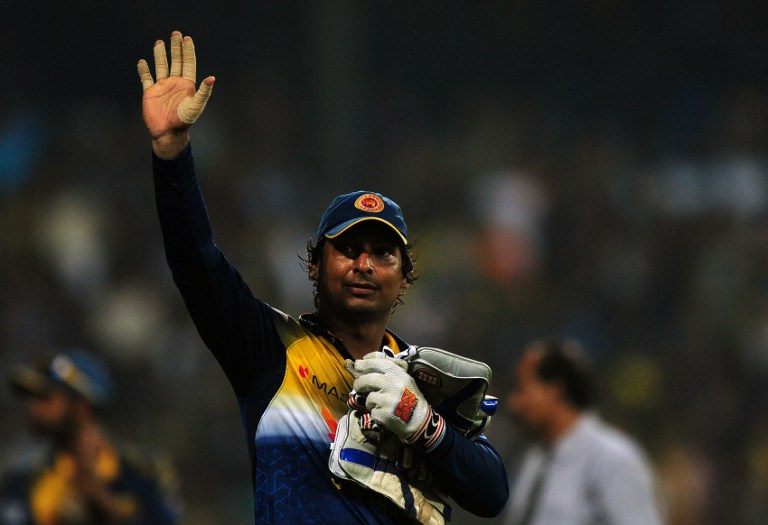 Kumar Sangakkara thanked fans by waving but was not given a chance to speak. © AFP

The seventh ODI between England and Sri Lanka on December 16, 2014, was the last time Kumar Sangakkara and Mahela Jayawardene played an ODI on Sri Lankan soil. Thousands had turned up to the R. Premadasa Stadium to be a part of the moment, and many thousands more were glued to their TV screens for the farewell of arguably Sri Lanka's two most adored cricketers.

Both were unfortunately dismissed early in their innings and could not finish on a personal high. Sri Lanka did win the match though, and Jayawardene and Sangakkara combined to take the final wicket in a joyous ending. Jayawardene, who rarely bowls, bowed out with a wicket in his final delivery, while Sangakkara registered a stumping off the final delivery of his final ODI at home.

The stands erupted immediately. The spectators cheered and chanted, and awaited the presentation ceremony and the celebrations that were to follow. This was the grand farewell for Sangakkara and Jayawardene that they had come for. The duo did their lap of honour to show their appreciation to all those who had turned up.

The post-match presentation ceremony was compered by TV commentator Russel Arnold. The former Sri Lankan cricketer invited both Sangakkara and Jayawardene in front of the cameras, and they both sheepishly walked up. They took their time getting there.

"I wasn't prepared for this but thank you very much," Jayawardene said after being handed the microphone.

After thanking his family, friends and fans Jayawardene handed the microphone back to Arnold, and with Sangakkara still standing there awaiting his turn to speak, Arnold invited the team to collect the trophy. Sangakkara, almost embarrassingly, walked off after being ignored.

Mistakes do happen and Arnold could be forgiven if this happened in error, but his explanation has made it clear that it was intentional.

Arnold admitted on Twitter that the decision to not give Sangakkara a chance to speak was his, but he appears to have since deleted that tweet.

It was done, he said, because Sangakkara spoke in the previous match, which was Sangakkara's final ODI in his hometown Kandy, and also because it was not his final match on home soil. Sangakkara has said that he will continue to play Test cricket, but this was the last time we saw him in ODI colours at home.

Arnold's deleted tweet read: "The decision not 2 go 2 Sanga was mine for reason mentioned before @MahelaJay @KumarSanga2 totally understand me and that's all I care about."

Why was the tweet deleted? Perhaps Arnold regretted the arrogance in his comment when he said, "that's all I care about", or do Sangakkara and Jayawardene not understand him?

Arnold then tweeted this apology on December 17: "Apologies @KumarSanga2 fans..called up to acknowledge both but didnt go 2 him as he spoke in Kandy,also not last game in SL #SimpleAsThat"

Even in his apology Arnold addressed 'Sangakkara fans'. There are very few cricket fans who are not fans of Sangakkara. Does he think the criticism directed at him came only from a small group? Blinded Sangakkara fans? Was Arnold oblivious to the fact that a majority of fans wanted to hear Sangakkara speak?

Sangakkara was the man of the match in Pallekele, which is why he had the opportunity to speak after receiving his award. And, just because he spoke at a different match on a different day, why should Sangakkara have been invited up to the presentation area and then be ignored?

The clarification was not acceptable or logical. The fans deserve a better explanation from Arnold. If he is still adamant that this was a sensible move, then it is an egregious error in judgement on his part.

I feel robbed, and other fans will feel the same too. Here was a perfect opportunity for the broadcaster to prepare and present good questions, which would have surely elicited memorable responses from the well-spoken Sangakkara, but they failed miserably.