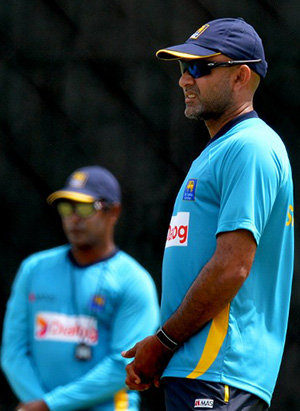 In AMC’s seminal drama Breaking Bad, Walter White is a cancer diagnosed high school chemistry teacher who decides to produce methamphetamine on the side to leave some money for his family before he moves on from life. He partners with Gustavo Fring, a drug distribution kingpin, who offers him a lab full of the best equipment to cook batch after batch of the perfect stimulant. White starts raking in money. All he had to do was continue business as usual and he would have been a very rich man. However, driven by his ego, greed, opportunist circumstance and the hunger for power, White systematically deep dives into the life of a criminal. Always wanting and then craving for more.

In cricketing terms, Marvan Atapattu is not your Walter White. He does not have the freedom to decide or think on his own, instead, Sri Lanka Cricket (SLC) see him as the ‘good thing’ that inexorably needs to be made better, with the latest round of cricket board meetings reconfirming the need to shove Atapattu aside for a more exotic coach from foreign lands.

Atapattu of course remains a candidate, but clearly if the cricket board thought that he was the right man for the job there would not be any need to go shopping for someone else. This comes on the back of Atapattu having overseen a hugely successful tour to England that was backed up with series wins in Tests and ODIs against Pakistan at home more recently. The only glitch has been the loss to the South Africans. It’s fair to say that Atapattu hasn’t really done anything wrong. It also seems that SLC has quietly forgotten that Atapattu was thrust into the job under chaotic conditions, when Paul Farbrace jumped the fence ahead of the England tour.

Through all that, Sri Lanka have remained a cohesive unit, full of spirit, and are playing some of their best cricket. How much of this can be directly attributed to Atapattu will always be unquantifiable, but coaches are easy targets, often when things go wrong for teams, so perhaps Atapattu deserves some credit then for keeping Sri Lanka in check and on course without any visible fault lines. Yet, he is now forced to go to work with the knowledge that there is an eight-man committee devoted to removing him from his position.

The need to change the head coach so late in the game is baffling. With just months before February’s World Cup — 12 ODIs and 2 Test matches away — one wonders just how much of an impact a new coach can have. The team will need to get accustomed to a completely new setup, while also dealing with SLC and its politics, which can wear down even the best of people.

Coaching requires time to knead into. Understanding players, and their unique demands, technically and emotionally, isn’t something you can do overnight. Given the short lead time to the World Cup, it’s highly doubtful that any coach will be able to make a meaningful impact.

Sri Lanka’s World Cup squad is currently taking shape, and the team structure and strategies for the tournament are being honed. If anything, now is a time that requires stability and consistency, not this inexplicable and unnecessary desire for change.

Perhaps the cricket board’s perception of Atapattu is derived from his previous post as the batting coach: critics argued that the batting coach had little impact, particularly on younger batsmen, given that Sri Lankas are in a transitional phase, but then there is Angelo Mathews’s rise as a match-winning batsman. How much of it is down to Atapattu is another one of those intangibles, but it’s safe to assume that he played some role in Mathews’s transformation.

As with all things related to SLC, there is always an odour of politics in most decisions made; and Atapattu, as the brother-in-law of SLC secretary Nishantha Ranatunga, appears to be caught up in the crossfire. Irrespective of any of that, what all this points to is that this isn’t a decision that is founded on any cricketing sense, much less any common sense.

When Darren Lehman was appointed coach of Australia he made an immediate impact, and that was mostly because in Australia’s case there was already a problem that needed fixing. Sri Lanka don’t have such gaping issues requiring drastic changes to the coaching setup, at least not this close to the ICC’s main showpiece event anyway.

To help them prepare for conditions in Australia, Sri Lanka will be better served by hiring a batting consultant instead, like they did with Chris Adams for their tour of England earlier this year. It would be more cost-effective and a far less disruptive process to allow Atapattu to coach Sri Lanka at the World Cup.

Atapattu may have his shortcomings as a head coach, but that has not been very apparent, at least not yet. Having worked under a number of coaches already in his time as batting coach and later assistant coach, he should be well aware of what the job entails. And if his Test career is anything to go by, he knows how to overcome adversity and succeed at the highest level.

In the end, on the TV series Breaking Bad, White’s attempt to chase the rainbow gets him killed. The money he made is stolen. His family is torn apart. He is left with nothing and is forced to rot in exile. Removing Atapattu might not be as dramatic for Sri Lanka, but it’s a good lesson in not being greedy, when the status quo is your best course of action. What is often ignored in situations like this is that the anticipation of something better can easily overshadow any perceived value. Don’t get greedy Sri Lanka.

The views and opinions expressed in this article are those of the author’s. Click here to submit your own opinion articles.