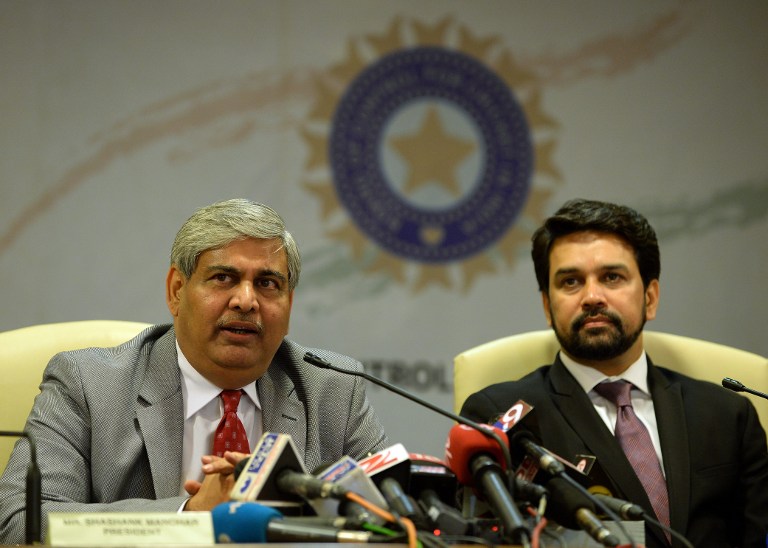 New BCCI President Shashank Manohar (L) recently stated his disapproval of the Big Three's takeover of the ICC, giving fresh hope to fans who feared for the future of the game. © AFP

Ever since it was announced over a year ago, cricket fans around the world have bristled at the thought of the Big Three controlling the game they love.

A petition has recently been released to pressure cricket’s governing body, the ICC, to repeal the agreement, which effectively gives the triangle of India, England and Australia — the Big Three — the power to control the ICC.

The decision to give the Big Three ruling power has also spawned the film Death of a Gentleman, which explores the decline of Test cricket and the part this agreement has played in it.

Why are cricket fans so concerned about the Big Three deal, and what are its long-term implications for the game at large?

While it may seem complicated, the issue is actually plainer than it seems.

To put it simply, several cricket boards rely on tours from India for much of their income. This is because India generates a large percentage of all cricketing revenue on an annual basis, and host countries receive significant income from Indian tours. A nation of 1.5 billion cricket fans in India entices advertisers to fork out millions, driving up the prices for broadcast rights and other sponsorship deals.

When the Big Three reform was originally jointly proposed by the Indian, Australian and English cricket boards it was met with resistance by other full members, the Board of Control for Cricket in India (BCCI) then threatened to withdraw its national team from cricket entirely — a move which would have left the game in financial ruin.

Left with very little choice, the remaining boards acquiesced with the agreement, with Sri Lanka and Pakistan the only two boards remaining opposed, but the deal saw non-Big Three boards receiving a significantly lower share of world cricket’s funding and revenue, and perhaps most concerning, it meant the Future Tours Program (FTP) was no longer a binding agreement.

Originally proposed by New Zealand, the FTP is effectively a scheduling roster over a 10-year period, with the aim of having each of the top 10 Test teams play each other at least once during the decade scheduled.

Ever the rabble-rouser, the BCCI has not stuck strictly to the FTP in 15 years. They have not once granted Bangladesh the privilege of an away series against India and they also controversially pulled out of what would have been a lucrative tour of South Africa for Cricket South Africa as punishment, after South African administrators appointed Haroon Lorgat, a former ICC chief executive disliked by the BCCI, as the head of their board.

Lorgat was a strong advocate for the adoption of a universal Decision Review System (DRS), an innovative technology that allows players to send a contentious umpiring decisions to video referral upon their request (twice in an innings), for both the fielding and batting teams. Although all nine other member nations voted for the technology, India was not a supporter of this system and thus the motion was not passed. As a result, host nations and broadcasters were eventually responsible for footing the bill to include DRS — countries such as Zimbabwe and Sri Lanka could not afford it very often.

The BCCI have also extended their control over the sphere of world cricket through the introduction of the multi-billion dollar Indian Premier League (IPL), a two-month-long annual Twenty20 franchise league, where players are bid on in a literal auction process. During the course of each tournament international cricket grinds to a halt, as cricketers earn more than their keep playing at the IPL.

Fast forward to 2015 and the IPL has undergone several match-fixing and corruption scandals and the Big Three have cemented their legislation to take control of cricket’s administration.

In scrapping the FTP, the Big Three have given themselves the ability to selectively cherry-pick who they play and when they will play them. This may sound the death knell for sides who have shown a strong improvement in performance but are unable to bring adequate finances to the table.

One can argue this has already begun to happen, and a close look at the ICC schedules will reveal why: Australia, in this instance, is an interesting case in point. Earlier in October, Cricket Australia cancelled their tour of Bangladesh, citing security concerns. Yet many felt that there was no reason the tour could not have gone ahead, as there was relatively little political instability at the time, not to mention the fact that the Tests would have made for compulsive viewing. Bangladesh were unbeaten in four previous series leading up to the Test matches, whilst Australia were fielding a relatively untried team in international cricket. This tour would almost certainly not have been called off if the tour had involved India, as the financial repercussions of cancelling the tour would have been far too damaging for the Australians to cope with.

New Zealand is currently in the midst of touring Australia, and despite a poor performance in the first Test in Brisbane, they bounced back to have the better of a draw in Perth. They are rated as one of the best sides in the world, not having lost a Test series since 2013, but the Black Caps have not toured Australia since the 2011/12 season and the other touring team this year, West Indies, have not had the privilege of a Test series Down Under since 2009/10.

India’s neighbours Sri Lanka and Pakistan have also already suffered as a result of the FTP’s scrapping. Despite a strong rivalry, India’s tour of Sri Lanka in 2015 was the first time their neighbours across the Palik Strait had participated in a Test series in Sri Lanka since 2010. Sri Lanka themselves have not toured India for Tests since November 2009.

Pakistan have not played India in a bilateral Test series since 2005 (although Pakistan toured India in 2007) and are only scheduled to play India as late as December 2015, which too is unlikely to happen.

The constant hand-balling of series between India and Australia is denying teams vital match practice against one of the world’s best sides in Antipodean conditions, as well as the crucial money generated by Indian tours.  There is also the ethical issue of India punishing boards by pulling out of tours and Big Three teams cherry-picking who they will play.

When combined with a lack of adequate finances, these reasons comprise a deadly cocktail for the future viability of the seven other full member nations of the ICC. But the long form of the game may also suffer, with the World Test Championship done away with in favour of the Champions Trophy, an abbreviated form of the ODI World Cup following India’s victory in 2013, during what was supposed to be the final edition of the tournament.

The future of the game is uncertain indeed, and with the Big Three in charge it is not difficult to see why cricket fans fear for the health of their beloved pastime.