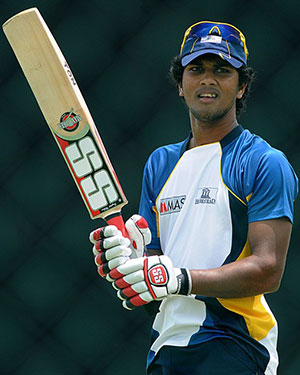 Was Dinesh Chandimal the right choice?
By Nuwan Peiris | March 21, 2013

The intent was to silence critics who questioned Dinesh Chandimal’s place in the T20 side and his selection as T20 skipper by presenting his T20 stats. If you have seen his stats, you can imagine how quiet I had become after pondering over them.

After making his T20 debut in April 2010, Chandimal was picked for the ODI side a month later, and he completed the trifecta with his Test debut in Sri Lanka’s historic Boxing Day Test victory in South Africa in 2011, in which he scored a fifty in both innings.

While we most certainly must laud his accomplishments, acknowledge his potential and admire his exciting stroke play, as well as take into consideration the fact that he can contribute both with a willow in his hand and behind the stumps, the fact remains that Chandimal’s T20 record is poor. In 14 matches, he has made 178 runs at an average of 14.83, and possesses a career strike-rate under 100, which can be considered unacceptable in the T20 format for a batsman taking up a crucial top-order position. If you detract his lone half-century, his average drops to 11.

Chandimal does however bring excitement to the game with his dashing strokes, and T20 cricket is often thought of as a young man’s game. It is an energetic, action-packed format that has served as a testing ground for younger players. It is therefore fitting to have a young captain in a form of the game that will most likely to be dominated by younger players.

With a young skipper, fresh ideas may well be ushered in, and going by the way Chandimal bats, it is plausible to expect him to be unafraid to take risks, while at the same time being fearless to trying out new tactics, which is why picking him as T20 skipper could well be a wise move.

The recently concluded Test series against Bangladesh underscored the importance of seniors in the side and that they are still good enough to hold on to their places, yet there is the inevitability of a batting order that will not include the seniors in the near future. Angelo Mathews, Lahiru Thirimanne, Dimuth Karunaratne and Chandimal are likely to form the backbone of Sri Lanka’s batting line up in all three formats at the very latest by 2015. Given this, there is a need to start placing more responsibility on the shoulders of these four. Merely expecting them to play more responsibly is insufficient and imprudent. They must take on leadership roles too, and there is no better time to do it than now. When not one, but three former captains are still playing, the guidance that a young and inexperienced captain will receive will no doubt be in abundance.

When one subtracts those who do not want captaincy (Mahela Jayawardene, Kumar Sangakkara and Tillakaratne Dilshan), and then takes away others who aren’t thought of as captaincy material (Rangana Herath, Nuwan Kulasekara and Thisara Perera), the selectors are left with the obvious choices: Chandimal and Mathews.

Division of labour is the in thing these days. Everyone is doing it. From Australia to England and South Africa to Pakistan; split-captaincy appears to be the way to go. It is indeed logical from a sanity point of view. ‘Burnout’ is a buzzword in the cricketing world of late, and with so much cricket being played, it makes no sense for one individual to be burdened with the pressures of captaincy for all three forms of the game, all year round. It is a decision that had to be made for the physical and mental wellbeing of the captain.

The opportunity to prove himself will arrive in less than a fortnight, but with not many T20 fixtures on the horizon thereafter, the next opportunity is many months away. If given the time to adjust to his new role, his mediocre T20 stats will improve and he will justify his selection as Sri Lanka’s new T20 captain.