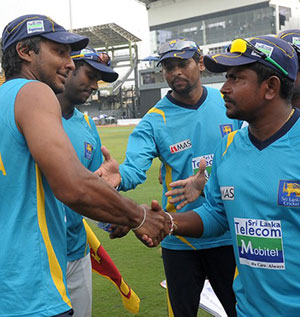 Sri Lanka beat Bangladesh by seven wickets in the second Test match at the R. Premadasa Stadium on Tuesday to win the series 1-0. Desmond Samith, who was present at the Premadasa to cover the Test match for the Sri Lankan newspaper Ceylon Today, recounts some interesting moments from the game.

Swansong
Veteran curator Anuruddha Polonowita was retiring after many years of service, and he chose a strange way to make his final Test match interesting and result-oriented after the avalanche of runs in the first Test at Galle. He left a little grass on the wicket and plenty on the outfield. Hitting boundaries was not easy. Cricketers who were talking about the wicket at Galle started talking about the outfield in Colombo. One wonders what Angelo Mathews, who called the Galle wicket a ‘road’, has got to say about the Premadasa outfield. A thicket?

Fast bowler
On day one, Bangladesh were bowled out for 240 runs, with left-arm spinner Rangana Herath capturing five wickets. After the day’s play, Herath met the media. Reporters wanted to know how a spinner thrived on a green top, which usually assists fast bowlers.

An unassuming man he is, Herath said: "The fast bowlers were applying pressure and I started getting wickets."

"You should start bowling fast," one scribe replied.

"No, I don’t think I can be a fast bowler," Herath responded.

"Why," the reporter asked.

"I’m not tall enough to be a fast bowler."

Herath, who teammates fondly refer to ask ‘Cheese K’, is 5 ft 6 in (1.68 m) tall. His nickname says a lot about the spinner’s fondness for a certain kind of food and his build.

Injury
On the second day, there were two centurions for Sri Lanka — Kumar Sangakkara and Dinesh Chandimal. At the end of the day’s play, it was ‘Chandi’ who met the media.

"How is Sanga’s injury," a young TV journalist asked Chandi.

Sangakkara injured? Oh my god! How did we miss it, wondered the other members of the media. In fact, the young TV journalist was referring to an earlier injury to the southpaw, but unlike Sangakkara’s drives, his question was ill-timed.

"What injury," Chandi asked. "Don’t you know he scored two hundreds in Galle and another one today?"

Happiness
Sangakkara met the press at the end of the third day to talk about his century and Sri Lanka’s chances in the match. Earlier that day, he had been given out in bizarre fashion. Sangakkara attempted a drive to a ball pitched outside the off stump, and it was not clear if the bat hit the ball before it was caught behind. The TV umpire, our own Ruchira Palliyaguruge, spent almost six minutes — some say the longest by a third umpire — before ruling Sangakkara out.

A Bangladeshi journalist asked Sangakkara: "Are you happy with the way you got out today?"

Pat came the answer: "No batsman would be happy to get out."

Weather
When the match was slipping away from them, there was no doubt the Bangladeshis — the cricketers and the 20-odd journalists present — would have looked up to the skies. Thunder showers had been forecast for the whole five days of cricket, but strangely enough, play was not affected even by a drop of rain on all four days.