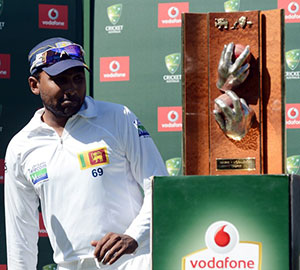 The recently concluded Test series against Australia was Mahela Jayawardena’s last as captain. There is a part of me that is not entirely unhappy with this. The respect that the team have for Jayawardena is unquestionable; his influence on and off the field, tactically and in terms of fairness and integrity, will always remain. However, stepping down as skipper in his second stint will no longer make him indispensable.

With Jayawardena no longer captain, a lean trot can certainly see him dropped. This, I hope, will create some hunger in the man to realise his potential, and leave an indelible mark in our cricketing history, which he deserves. Aravinda de Silva also blossomed later in his career, and while Jayawardena has passed even that cut-off point, let’s hope that he rewrites the record books in what time little time the 34-year-old still has left in the game.

Wishful thinking aside though, this final series summarised Jayawardena’s career. Almost there, but not quite. Sometimes embarrassingly bad, sometimes showing character and fight, but not quite able to drag his team over the line. His twin 50s at the SCG were a finger-wag at the critical media, although the wag was somewhat feeble. What we have always needed from him has been centuries (not 50s), and his first half-century in 26 innings away from home was too little too late. Whatever he does — even wishfully — from now to the end of his career, could prove to be too little too late.

What of the Test series? There were headlines in the local papers, using words such as “pathetic”, “humiliation” and “drubbing”. There is probably an emotional case to be made for the use of such words, but it is a little harsh. As Semisonic so aptly put it in Closing Time, “Every new beginning comes from some other beginning’s end.”

The fact that Sri Lanka have reached several ICC tournament finals in the last few years is irrelevant, and harking back to them as some sort of justification of our exalted cricketing status is counter-productive. That needs to be acknowledged. Making a World Cup final didn’t help us at the MCG. Hopefully, expat Sri Lankans back at work after the Boxing Day embarrassment didn’t respond to taunts with: “Yeah! But we beat you in ‘96”.

Sri Lanka showed some fight in Hobart, but that was largely thanks to Tillakaratne Dilshan’s only significant contribution in the series. When he fires, he helps the side immensely. Whether he fires consistently is a question the selectors need to ask themselves.

The injuries to Prasanna Jayawardene and Chanaka Welegedara were huge blows, as they were the best available in their respective disciplines. Jayawardene manufactures dismissals, and some of his catching and stumping is so good that you almost feel he should be credited with the wicket rather than the bowler. His loss was a huge blow to Rangana Herath, who struggled manfully without much assistance from the other end.

The second Test is best forgotten. The thought of Sri Lanka playing a Boxing Day Test was exciting. I didn’t expect to them to win, but I hoped that they would rise to the occasion. They managed scores of 150 in one innings and just over a 100 in the other. It was one of the worst innings defeats suffered by Sri Lanka. Defeat was acceptable; the manner of it, not.

The third Test was always going to be our best chance. Noteworthy performances from Dimuth Karunaratne, Lahiru Thirimanne and Dinesh Chandimal made for a better showing than the previous Test. Herath did what he does best, but again Australia were too good, or were they?

Just prior to the series against Sri Lanka, Australia was convincingly beaten at home by South Africa. The Proteas made their bowling attack look pedestrian. The Australians couldn’t win a match. This is not an outstanding Australian side, but they do give it their all.

Matthew Wade’s running catch in Hobart and his match-winning hundred in Sydney underlined how the testicular cancer survivor is hungry to do well at every opportunity. That Sri Lanka dropped him several times on his way to hundred, and bowled to him in exactly the right areas for him to free his incredibly fast hands, helped him along the way. Perhaps in the face of Vernon Philander and Dale Steyn he would have been exposed, but Sri Lanka did nothing to make run-making difficult for him. So it wasn’t a case of Australia being too good, it was a case of the visitors just not being good enough.

Watching Dhammika Prasad trying to bounce out Australian batsmen in Hobart was hilarious. What few wickets that fell to the bouncer can be put down to overconfidence on the part of the Australian batsmen, rather than being out-thought. The one time Sri Lanka needed to bowl a bouncer — against Wade in Sydney — it came 30 runs too late. It is obvious to anyone who watches with a critical eye, that the bowling was sans detailed plans. A lot of it was bowl and hope. Prasad adds very little to the bowling side, and while Nuwan Pradeep and Suranga Lakmal bowled with a lot of heart and some pace, it is fairly obvious that they need to be told that line, length and discipline are their friends.

Contrast these two raw fast bowlers with another of their breed who completely destroyed the experienced Sri Lankan line-up — Jackson Bird. What is it about him? He is not particularly fast, he has a dubious name and he’s not exactly good looking. Apart from having a better hair cut than our two boys, there’s really not much between them physically and potentially. But he ends up being ridiculously successful on debut, and our lads woefully inadequate. Is it really, really that difficult to bowl six balls on the same spot? Not, I am told reliably, if you’ve been doing it often enough.

The difference, as I have been saying ad nauseum, is preparation. Bird was the in-form bowler, ready to come in, aware of the game plans and aware of where to bowl and what to bowl. But apart from just talking about it during team meetings, as Sri Lankans do so often, he was probably doing it week-in, week-out in the domestic competition. On the other extreme, Chanaka Welegedara was playing his first game in several months, and predictably ends up with a torn hamstring.

In an interview a couple of days ago, captain Jayawardena made a few interesting comments.

“Here (in Sydney), I think we fought really well, but it wasn’t good enough,” Jayawardena said. “The Australians played some really good cricket. They did give us a few chances, but we weren’t good enough to take control and push forward.

“When you are competing at this level, I think we need to be much better prepared and show more character to win Test matches in these conditions.”

Hasn’t Jayawardena played enough cricket to know how prepared they have to be? Hasn’t Graham Ford coached successfully enough to realise the levels of preparation that are required? I raised this point in an article on these pages before, and the captain concedes it after the defeat. Surely if it is apparent to some, it should be apparent to the experts. Even the Boy Scout motto preaches, “Be Prepared”.

At several thousand dollars per mensem, coach Ford’s brief is to prepare these boys. Apart from coming out with the obvious, and saying that the MCG Test was the worst he has ever been involved in, I’d like to see him take some accountability.

I agree with Jayawardena. We need to improve on the intangibles to win Test matches. Intangibles such as ‘character’.

Character is pointless if we don’t have the requisite skill levels. And if I can keep my bum on a seat for eight-something hours for not a whole lot of money, cricketers making oodles of cash should be hitting balls, taking catches, and bowling for predetermined lengths of time during training sessions.

Allowing for conditions, experience etc, is fine. But the captain admits, “we let (them) get away from us [and we] dropped a few catches.”

Dropped catches happen, but the alarming regularity in this series shows a marked lack of preparation and hard work at practise sessions. How many catches is a player taking in a session, Mr. Ford? Do you know? How many is he holding onto, how many is he dropping and is he showing any improvement? I’d really like to know.

Thilan Samaraweera’s dismissal at the SCG is a case in point. The shot was uncharacteristic of Samaraweera, and Jayawardena’s open-mouthed disbelief at the other end was proof that this was not part of the script. Let’s get this straight — Samaraweera has been brilliant for Sri Lanka in England and in South Africa, where he won Sri Lanka their first Test on South African soil. That shot however spoke to me less of Samaraweera’s failing, but bad planning. The shot was on because of the field-placings, but did he have enough behind him to execute it, and was it the right moment of the game to attempt it?

The advent of the young players has been superb. Chandimal showed immense fight with the bat, despite coming in one place too low, and took some good catches behind the stumps. To ignore these contributions from him, Karunaratne and Thirimanne would be foolhardy. Someone has to give way for the next generation, and accountability rules must dictate who those players need to be.

In his interview, Jayawardena said in no uncertain terms that Sri Lanka were not good enough. You don’t get good by just talking about wanting to be good. So, hopefully, this realisation on the part of the captain will trickle down to the rest of the establishment, and more importantly the fans who will need to adjust their expectations accordingly.

Miracles are not necessary. Some hard work, accountability and a system that breeds competition for places can help Sri Lanka put this series behind them.