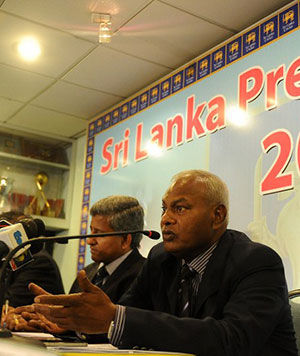 When I posed a question to an official at the cricket board recently, I was told my question was "unethical". I had wanted to know how much the inaugural Sri Lanka Premier League (SLPL) T20 tournament would cost the board. It came as no surprise to me that Sri Lanka Cricket (SLC) had officials within in it who found questions that would require them to be financially accountable and transparent to be unethical. Kumar Sangakkara did say in his Spirit of Cricket Cowdrey Lecture, that after Sri Lanka’s World Cup win in 1996, "accountability and transparency in administration and credibility of conduct were lost."

It is understood that the bulk of the expenses for the SLPL are borne by SLC, while the profits are to be split evenly between tournament organisers Somerset Entertainment Ventures (SEV) and the board, but how much did SLC spend on the tournament, and did they make a profit?

SLC was at one point the richest sporting body in the country, but it is now mired in debt, and that’s largely due to dreadful decision–making by officials who don’t possess the qualifications to make decisions on matters that could potentially result in the loss of millions of dollars for the board. Former sportsmen with no more than a secondary school education have shown us that they make terrible administrators. Competent administrators would not risk awarding the contract to organise the SLPL to a company that was previously unknown, only founded in time to bid for the SLPL tender, or allow Basnahira Cricket Dundee — an Indian cricket fan community — and other obscure organisations to purchase SLPL teams. Officials with SLC’s best interests at heart would not hand local broadcast rights for three years to Carlton Sports Network, which the secretary of SLC is the chief executive of, and that too just months after the station was launched; nor would they have been unable to stay within the given budget for the construction of World Cup 2011 stadia, which has left the board in millions of dollars in debt.

It is unfortunate, but not entirely unexpected, that the cracks in the SLPL are beginning to show. The tournament is looking more and more like another loss for the board, another letdown for the players and a huge embarrassment for the people of this cricket–crazy island.

"Franchise holder Basnahira Cricket Dundee has not honoured the payments [owed] to five foreign players who took part in the tournament and SLC sources said that the Federation of International Cricketers’ Associations (FICA) has threatened serious action unless it is settled immediately," the Daily Mirror in Sri Lanka reported on Thursday. If FICA chief executive Tim May is to be believed, it is likely that FICA will recommend a boycott of the SLPL, as several SLPL franchise owners are in no position to honour contractual obligations made with players, such as providing bank guarantees in advance and paying players a partial payment in advance, let alone paying at all.

It has come to light that the owners of the Uva franchise failed to provide funds for the team to take part in the ongoing CLT20 in South Africa, for which they had qualified for after winning the SLPL. The cricket board was then forced to request the organisers of the CLT20 tournament to bear the costs, which is to be later deducted from SLC’s participation fees.

Meanwhile, Sandiip Bhammer, the chairman of SEV, has admitted to owning the SLPL team Kandurata Warriors after he was caught on tape attempting to sell advertising space on the team’s jerseys to an undercover Indian reporter for cash. "There is absolutely a conflict of interest," Bhammer admitted after he was found out, before revealing that yet another team in the SLPL had literally fallen apart. "The reason I took over the team was that the owner who initially bought the franchise could not bring down the money for reasons best known to him. That is why I had to intervene. Because this was on the verge of the start of the tournament, there was no time to look for any other entities interested in buying the team. So, for the sake of the SLPL, I took over the team. Now, we are currently looking for a buyer for it."

Furthermore, the tournament was rocked by an Indian boycott, which led to the postponement of the launch in 2011, and it also lacked the participation of several marquee players. If success is determined by SLC’s ability to host a few T20 matches, then the SLPL was a roaring success. But for those who don’t set the bar so low, nothing about the SLPL shows that it can help the board’s financial crisis, or that it is aimed at developing cricket in Sri Lanka.

The domino effect of poorly planned ventures continues bring about more losses for the board, but will heads ever roll? Who will be held accountable for these blunders? It would be foolish to expect anything more than deceitful comments from board officials and the sports minister before they pass the buck. Don’t count on any state entity to probe their conduct and hold anyone responsible either.

The pinch has already been felt by the nation’s next generation of cricketers thanks to the repeated blunders orchestrated by board officials. The board has struggled to pay wages to contracted cricketers, and it has no funds to launch initiatives to help upcoming players. All SLC–owned stadiums are maintained by the armed forces because the board could not afford the upkeep. For months, they were unable to even pay utility bills. The International Cricket Council (ICC) was forced to take the unusual step of handing out an advance payment and a grant to SLC to help out with the costs for the ICC World Twenty this year.  And at one point, the cricket board owed nearly two billion rupees to a Chinese company for the construction of the Mahinda Rajapaksa Stadium, which was built for last year’s ODI World Cup. It is unclear how much of that debt has been settled more than a year after the World Cup.

Last November, while standing in line to settle an invoice at the cashier’s office at Lanka Hospitals in Colombo, a whiteboard with big, bold letters behind the cashier caught my eye. "No credit to Sri Lanka Cricket," it read. The reputation of the board had been destroyed to such an extent, not even medical treatment would be offered until payment was made in advance, according to an employee at the hospital. High–ranking officials at the board however continue to collect their various allowances. The destitute board still coughs up money for their fuel, vehicles and mobile phone bills, in addition to handsome monthly wages. These officials almost proudly admit that they are facing tough times, and even brag about not having yet resorted to begging, but they hold the blame for virtually bankrupting the board.

When this Upali Dharmadasa–led executive committee took over from the previous government–appointed interim–committee in January, the board’s debt is said to have been at a little over nine billion rupees. Dharmadasa said at the time that it "will be a struggle for about five years." But nine months into his one–year term, the president of SLC and his administration have shown that they are incapable of creating new avenues to generate revenue. His administration has instead suggested slashing jobs at the board, reducing the wages of players who are already some of the lowest paid amongst the top teams and taking away the players’ earnings from image rights paid to them by the ICC. While cricket boards in India, Australia and England rake in vast sums of money through lucrative sponsorship deals, events, the sale of memorabilia and merchandise and advertising on their websites, SLC continues to rack up its debt and appear to be content with a handful of traditional revenue streams. Instead of forward–thinking, well–qualified business professionals in charge, the board has been plagued with our politicians’ lackeys. If the last SLC election is anything to go by, this current administration will continue on for several more years; one can only hope that the damage is not irreversible.