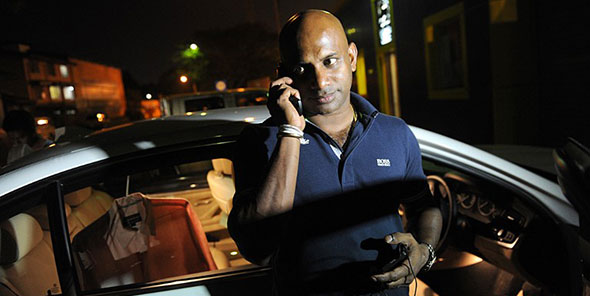 The players agreed to sign new contracts after being spoken to by ruling party MP and chief selector Sanath Jayasuriya. © AFP

At the time of writing there were two cricket matches going on, which I would rather be at. But I’m diligent. And work hard. Really. Sri Lanka were playing Bangladesh in Galle, and what were the chances that Kumar Sangakkara wouldn’t score a hundred? Sri Lanka finished with nearly 350/3 on the first day. It could be a long series for Bangladesh, who have come up against a team who have been hit where it hurts the most. In the pocket.

In Colombo, Royal are playing St. Thomas’ and it’s raining. I’m glad I didn’t go. Not in the ‘sliding on the covers’ mood at the moment.

Coming back to hitting the Sri Lankan cricketers in the pocket, let’s look at what happened:

2) For the first time ever, SLC did not have a three-to-four-month lag before handing over the next set of contracts, requiring them to be signed immediately.

3) The contracts did not include the payment of 25-percent of the guarantee fee from the ICC. This is a fee paid by ICC to SLC for every ICC tournament the team participates in. It’s a tournament-by-tournament payment, and can be fairly substantial. The players usually get a quarter of the ICC payment as negotiated by Sanath Jayasuriya himself, along with the other seniors at the time, in 2003.

4) The contracts also seek to dock pay from the cricketers when they are on duty at outside tournaments such as IPL, Big Bash etc. It’s prorated time-wise and deducted accordingly.

5) There’s also a variable component of the contract linked to the team’s ICC ranking, as well as a cutback on the players’ wives being allowed to travel business class on one tour of their choice per year.

These are pretty hefty regressions from the players’ point of view, to say the least.

When the word ‘lockout’ was used to describe the situation, I got a little excited. I thought we would have an NBA-style impasse, with both parties standing their ground, with some brinkmanship and posturing. Alas, to no avail. The Great Lockout of 2013 lasted a mere 24 hours, with the highest casualty being Sangakkara who was told he can’t play a match at the last moment, even after driving down to Matara.

Opinion on the issue though has been divided. Several people have been quite perturbed, hearing the amount Sri Lankan cricketers earn. Yes, they earn a fair bit of cash, but they do have to work hard under immense pressure. The fact that they’re not performing at their peak is a different issue. Sportsmen all over the world get paid lots of money, and it’s only because those of us complaining about it, lap them up adoringly. Supply and demand. It’s pretty simple.

Add to that the hackneyed arguments about sports being a career with a limited-opportunity window; the requirement to maximise does exist. Chastising them for wanting their pound of flesh is a little anachronistic and naive. Everything is professional now, and if we Sri Lankans want to play in the big leagues, we need to match them in every way. When the IPL came around, Cricket Australia tripled Ricky Ponting’s contract, so he wouldn’t be tempted. That’s how competent administrators think and that’s how professionalism works.

We’ve been told that SLC is in dire straits, and this cutback is to help put them back in the black. This justification is just… well, bollocks. Interim committees have been in place for years since the Thilanga Sumathipala administration, which was accused of financial irregularity. We’re still to see a report on those irregularities come to light since circa 2002. Furthermore, the ICC Cricket World Cup 2011 secretariat was a den of thieves. The Hambantota and Pallakelle stadium builds lined the pockets of everyone but the players, and are administrative disasters. Tournaments like the SLPL were sold to fairly dubious institutions, long term, for a song. TV rights are sold to local stations (whose CEO happens to be the SLC secretary) without island-wide coverage for next to nothing. Hottie secretaries are employed as playthings, on exorbitant salaries, and the overstaffed office has allowances that run into the gajillions for assorted peons and messengers who really add much less value than the lowliest contracted player in Sri Lanka.

Therefore, saying that SLC’s woes are as a result of the players being paid too much is the joke of the year, or quite possibly the decade.

The reason that players are being paid a high percentage of revenue is because the other revenue generating assets like tournaments, sponsorship rights and television deals are disposed of for a pittance via conflicts of interest and corruption. There is no way that paying 25-percent of the guarantee fee, plus contract figures, can amount to over 75-percent of SLC’s revenue. If that’s the case, you need to fire a few people who are not players.

The fact that the players caved so easily without drawing any attention to the above factors also disappoints me. It’s as if they said: "Well, let’s make as much as we can, rather than nothing at all." SLC now resembles the government. Tax and exploit the poor who work hard for an honest living, so that the corrupt can squander everything through their dishonest shenanigans. The parallels are just too obvious to ignore.

Sangakkara alluded to just this sort of mismanagement at Lord’s, and nothing has been done about it, which is telling. The fact that the cricketers have agreed, at Jayasuriya’s ‘persuasion’, with nothing so much as a whimper, to sign these contracts is a sign of the times. The coercive power of the establishment.

The issue doesn’t really hit the big players really hard. Jayawardene, Sangakkara, Malinga et al have feathered their nests, and the 25-percent is not a huge dent in their earnings. However, for cricketers who are just beginning their careers, it’s a substantial amount. Prorated payments and performance-linked variables also make financial planning a nightmare, as the outcomes are not always directly in your control. To say that the cricketers got stiffed is an understatement.

What is really tragic though, is that the person in the bargaining power of strength, got played.

SLC would have committed suicide in sending a B-team to play Bangladesh. They would have copped it both domestically and internationally. Foreign journalists may just have asked some intelligent questions. If the players held on, they might have forced some accountability to be agreed to. Instead, they have signed off meekly, on the assurance that the issue will be looked at again when contracts are up for renewal, and an acknowledgement that the current financial woes of SLC are not of the players’ doing. Pfft.

The players, led by two greenhorns in Angelo Mathews and Dinesh Chandimal, and deprived of their legitimate representatives in terms of the players’ association and their agents, have agreed purely in the self-interested short term. As we do. In time to come, young Sri Lankan players will not be able to negotiate anything for themselves. They will not even grasp the nuances as their predecessors did in 2003 when first negotiating. They will, instead, like all the rest of us who work honest jobs, see their hard work help fatten the cows of those in power, under the draconian thumb of whichever political appointee.

This episode was a microcosm of the larger Sri Lankan problem. To eliminate similar results, we have to take different approaches. Where the players have failed themselves and their successors, we shouldn’t.