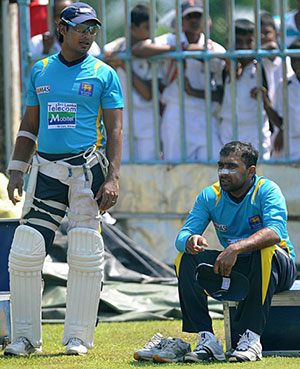 What was it about the Boxing Day Test that appalled the Sri Lankan cricketing public so much? Personally, I wasn’t surprised. Perhaps a little perturbed by the obvious lack of fight, but not overly surprised at the result. What can we really expect from a team of talkers?

I’ve spoken to Sri Lankan captains — the last two at least — pretty extensively on plans, preparations and long to medium-term issues. Both of them, and I don’t know if this was true of their predecessors, almost automatically use a variant of the phrase: ‘had a chat about it’.

After the last Test, Mahela Jayawardena is reported to have said: “Despite having talked about what needed to happen, we haven’t put those things into action. Especially the batsmen need to take a lot of responsibility.”

I remember a BBC interview prior to the T20 World Cup last year, where Kumar Sangakkara was pointedly asked whether Sri Lanka knew what needed to be done this time in order to win a final, only because of the number of ICC tournament finals they had lost previously. Sangakkara mentioned that they were aware of what needed to be done, and had ‘talked about it’.

Clearly, as recent events have borne testimony to, all the ‘talking’ does them no good.

Frankly, I’m up to here (just above the eyebrows) with all the ‘talking’. These are just two examples of the Sri Lankan team admitting to talking about things. I can’t remember more specific examples, but the ‘had a chat’, ‘talked about it’ and ‘need to have a discussion’ catch phrases are gushing out of my ears.

By the looks of things, talking about it is all they do and that’s also where the thinking and application stop. We don’t hear phrases from either Jayawardena or Sangakkara on how they worked hard in the nets facing the short ball, or that the bowlers have done a lot of work during practise session on maintaining a consistent line and length.

Are these things given? The manner in which they play would suggest not.

One would imagine – hyperbolically of course – that team meetings sound a bit like this: ‘Mate, they’re going to bowl short, so we’ll have to play well. Let’s also not drop any catches, and bowlers must try and take some wickets while we’re at it. Right, see you tomorrow at the MCG’.

This may sound uncharitable, but the pre and post-match rhetoric needs to be compared to something like Ed Cowan’s remarks in the lead up to Sydney: “We experienced some disappointment earlier in the season, and this is us trying to vent that a little bit and we are pretty keen to see Mike off with flying colours.

“It’s not like we’re flying out [to India] tomorrow and are dumped in the middle of Hyderabad and told good luck. It’s six weeks [away]. Some guys are going over earlier, there’s going to be a huge amount of preparation time. I’m pretty keen to face spin [in the Sydney Test] if the wicket looks like that, because I don’t think it’s going to turn very much, so if Sri Lanka want to play two spinners that’s probably to our favour.”

Cowan, one of the newest members of this Aussie setup, knows exactly how long there is for the tour of India to begin. Some of the Aussies are flying in early, when Sri Lankan stars are expected to perform after landing the day before the Test match. Remember England?

Cowan is also well aware about what needs to be done, and talks about the “huge amount of preparation time”. That Sri Lanka rarely – through administrative incompetence and a host of other reasons – have little preparation time on tours is the norm. The players and the public understand that. But was the preparation time only sufficient to last two-and-half days of a Test match? Probably not.

Since coach Graham Ford and most members of the team have been muzzled, it’s difficult to find out answers to some pertinent questions. Questions such as: how many net bowlers did Sri Lanka manage to acquire who were left-armers? How many short-balls each did the top-order face in the nets? Did Jayawardena find his off stump in among his Christmas cards? How much video analysis was available on Jackson Bird?

These are all questions that need to be asked, not so much by the media, but by those paying the salaries of the obviously underperforming elite.

If adequate preparation was done, and Sri Lanka were blown out of the water by an unstoppable Australian side, I would be the last one complaining. But that wasn’t the case. The comedy of the shot selection, the appalling running, the amateur catching and the pedestrian bowling — with the notable exceptions of a few spells from Shaminda Eranga and Rangana Herath and Prasanna Jayawardene’s keeping — points to a larger malaise. The malaise of laziness and lack of accountability.

Most of Sri Lanka’s senior players, and even the not so big names, woke up the day after the MCG Test without any of them fearing for their place in the team. It was business as usual. Let’s face it — none of these players are going to get dropped. Why? Because Sri Lanka do not have better replacements.

Lasith Malinga has turned his back on the establishment, and is laughing all the way to the bank because his ability currently is unrivalled even by Sangakkara or Jayawardena. If any Indian billionaire, or Australian franchise, is given a choice they would naturally pick Malinga out of a line up containing Jayawardena and Sangakkara because Malinga has proven to be far more consistent and a match-winner.

Nevertheless, neither of the two big names, nor Tillakaratne Dilshan for that matter, fear that they will be dropped. And until the selectors dangle some promising youngster in their faces to threaten their places, and until Angelo Mathews fits back into the boots he seems to have outgrown, the aforementioned players will be indispensable. And they know it.

Nothing affects performance like apathy. Those of you who follow rugby will know that New Zealand won the World Cup in 2011 after several attempts. Key to that success was the mid-field master class provided by the erratic Ma’a Nonu. The big hitting Wellingtonian has never been the most popular character in New Zealand rugby, and has had his skills questioned by several pundits over his career. Dropped balls, missed tackles and botched passes were as much a part of his repertoire as the occasional line-breaking gallop. However, to the surprise of many, Nonu played the rugby of his life right through the tournament. The only reason for that was a bloke named Sonny Bill Williams. SBW, as he is monikered, was the ‘next big thing’. His offloading prowess, strength and power had him ahead of Nonu in several newspapers and talk shows. In fact, coach Graham Henry made it known to Nonu that SBW was very much a part of his plans. Although Nonu started most games, SBW would almost always come on later and perform some heroic feat as a substitute. The insecurity about his place in the side drove Nonu to greater and greater heights. He was devastating in the semi final against the old enemy, Australia, and having won his starting spot for the finals, he was abysmal against France in the last game. But history will record that he started the final, ahead of one of the game’s new sensations. For Nonu, starting that final was the culmination of his World Cup. For most of that final, he went through the motions.

An experienced Sri Lankan domestic cricketer told me recently that his coach was planning to drop him for an upcoming match to play an influential youngster, and he objected vehemently to the suggestion by scoring a century in his next match. Top-level sportsmen are creatures of their own egos. They want to be the best. We mere mortals assume that the glory of winning alone will motivate players, but often it’s something far more primeval. The alpha male in a pride of lions will defend his territory and claim his pride to the death if other males dare threaten his position. While for the Sri Lankan underachievers, there’s literally no one threatening their positions. They can underachieve manfully, and lick their chops without fear of reprisals. And until Sri Lanka Cricket introduce a selection policy that creates competition for places, complacency will abound.