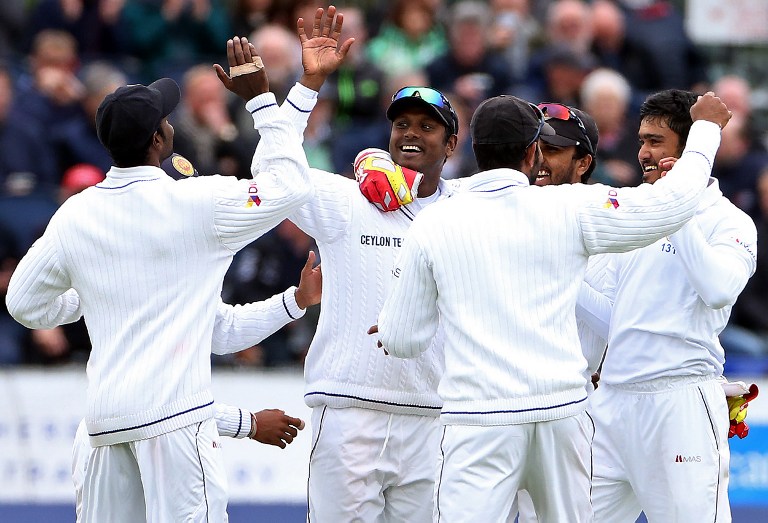 Sri Lanka's downturn was predicted by all and sundry. They continued their merry drive, even though the signboard clearly signalled a steep cliff ahead. Sri Lankans were in denial. I was no exception. We looked back at history and took heart. We patted ourselves on the back and believed that there would be that next 'somebody' to carry Sri Lanka forward. Did Sri Lanka really make an attempt to find or groom that next 'somebody', or were they expecting a rabbit out of the hat, like how Rangana Herath cropped up suddenly to continue from where Muttiah Muralitharan left off?

The purpose of this article is not to gloat about Sri Lanka's failure to groom youngsters, it's more about the continuous living in denial. We failed to acknowledge that cricket in Sri Lanka is inundated with problems.

Let us put aside discussions on revamping the domestic structure. Plenty has been written and spoken about it, although no real effort has been made to walk the talk. Sri Lanka have the right resources to do well internationally. Sri Lanka have the luxury of three seam bowling all-rounders, several spin bowling all-rounders, a plethora of hard hitters, and a handful of technically sound batsmen. No matter how good the English domestic system may be, their batsmen are going to be found short in the sub-continent. A good domestic system can bear fruits in the longer run, but it can never address on-going incompetencies.

Sri Lankans seem to have mastered the art of self-pity, continuously lying to ourselves to enjoy the blissful ignorance of illusion. Yes, the red pill is tough to swallow. The excuses we gave ourselves when we faltered was with the system that has carried us to the position we are in now.

The World Twenty20 2016 debacle was blamed on Lasith Malinga's absence, then on a team in transition and inexperience, global warming and climate change. Then the early exit in the 2015 ODI World Cup was because of Malinga's belly and the planets that could not align properly. The Test series defeat in England was because of the cold climate, poor warm-ups, pedestrian umpiring and what more, the fire in the army arsenal?

Do we even make an attempt to admit our mistakes and rectify them, as much as we love to take positives from each and every humiliation? Didn't we lose Test series to Pakistan and India at home?

Jeevan Mendis and Seekkuge Prasanna were brought into the ODI team on the eve of the 2015 World Cup, since the pitches in Australia tend to help leg spinners. Were we informed that the 2015 World Cup was going to be held in Australia on short notice? Sri Lanka had four years to prepare yet it was only a month before tournament that we decided to experiment.

Lakshan Sandakan was included in the ODI squad briefly, but it was Tharindu Kaushal who was included in the World Cup squad as an injury replacement. Upul Tharanga batted at number eight against Australia, and the entire batting order was shuffled for the quarter-finals because Dinesh Chandimal's injury weakened Sri Lanka's middle order (or so it was claimed). But, had it not been for Mendis's injury, Chandimal would not have found a place in the team. Kusal Perera, who was left out of the World Cup squad due to poor performances, was opening the innings in the quarter-finals in place of the in-form Lahiru Thirimanne. And did I tell you the 'duplicate Murali' never played an ODI again after the quarter-finals?

The 2015 World Cup might belong in the distant past. Any discussions on it might be gratuitous. However, the mistakes that lead to that World Cup failure are still relevant. Sri Lanka failed not because of poor execution, but because of poor decision-making. The team and management were confused and clueless. The desultory attitude, coupled with our belief in miracles and the potluck taken in team selections, orchestrated that mess.

Fast forward to the World Twenty20 earlier this year and the same mistakes were glaring right at us. Angelo Mathews, who eventually led Sri Lanka at the World Twenty20 after Malinga pulled out, suggested he was not comfortable with the team Malinga had picked. Eventually, a comedy of incidents followed and the selectors were sacked, which led to a squad that had only two changes: Suranga Lakmal got a chance as cover for Malinga (at the expense of Jeffrey Vandersay) and Thirimanne was back at Niroshan Dickwella's expense. Lakmal never played a game until the dead-rubber against South Africa, and that too only after Dushmantha Chameera was injured. Vandersay played against the West Indies ahead of Sachithra Senanayake, who was with the squad from the very beginning.

Thirimanne's inclusion was to stabilise the innings, but little attention was paid to Chandimal and Tillakaratne Dilshan playing out a lot of overs without scoring much, leaving only a few overs for the rest of the batsmen to up the ante. In the decisive game against England, Milinda Siriwardana was promoted to number-three, demoting Thrimanne to four. What was Thirimanne, who was supposed to bat through the innings, expected to do at number-four? And that too during a run chase? If the need was an attacking number-three, as the promotion of Siriwardene evinces, why was Thirimanne in the team in the first place?

Once again, unsurprisingly, the debacle was glossed over and the farcical team selection was brushed under the carpet with the then interim chairman of selectors Aravinda de Silva taking 'full responsibility'. Mathews spoke about being patient and sticking to a combination (was it some wisdom in hindsight?), but what is the point of being patient with a team that is not suited to the shortest format? Malinga, once again, was thrown into the limelight so that those who made calls during the World Twenty20 could find some cover.

The truth is that Sri Lanka never had a team that could do well in these two tournaments. Poor strategies, indecision during times of adversities, the lack of a selection policy, a long-term plan that is absent, stop-gap solutions implemented to seek temporary solutions, and the apathy towards the rapid changes happening in world cricket have all contributed to Sri Lanka's demise.

To top it off, shrewd minds like Malinga, who had the right ideas to concoct a good team, are detested and ignored. Malinga, with all the experience he had playing T20s across the globe, was the first to realise that Chandimal and Thirimanne should not feature in a T20 side, but his views were despised by most. It took a World Twenty20 defeat to realise how visionary his decisions were.

Fortunately, Dilshan has withdrawn from the ODI series against England, but will Sri Lanka be going back to him for the ODI series against Australia? How long will it take to realise that the shorter formats have no room for players like Thirimanne and Tharanga? What do we expect of Prasanna, and what has he done so far to deserve another call-up? Will Sri Lanka ever find the right horses for courses? Does Sri Lanka have any plans of playing a wicket-taking spinner in the shorter formats, or are we going to continue to be happy with run savers, and then complain about the lack of wickets during the middle overs?

The first step to solving a problem is to acknowledge that there exists one. But, for the time being, we are happy to live in denial. Sri Lanka Cricket should keep pace with the rapidly changing world. Cricket today is very much different from what it was two years ago. If we are not willing to accept our mistakes, rectify them and conceive a strategy, and pick a side to fulfil that strategy, then what happened in the previous two ICC tournaments would continue at the Champions Trophy in 2017 and the 2019 World Cup.