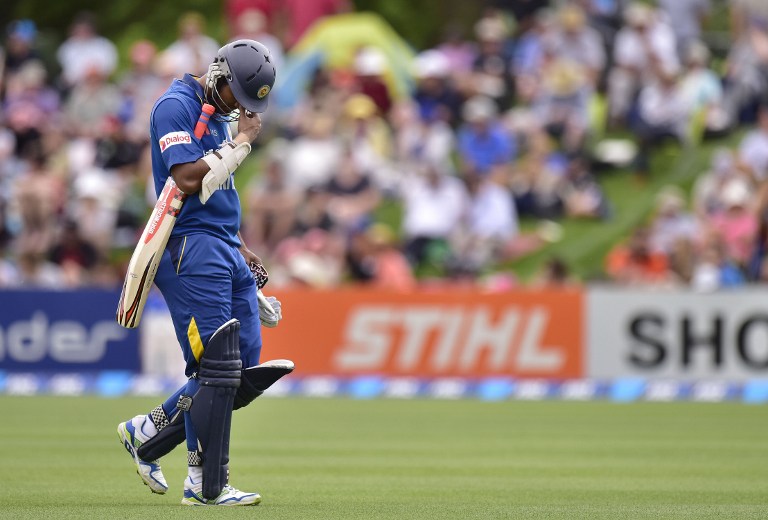 Sri Lanka's World Cup preparations have gone awry. They appear unsure of their final combination, this close to the start of the tournament.

There is uncertainty and a lot of chatter amongst fans these days, wondering if there are provisions in the regulations to make amendments to the 15-man squad. With Russel Arnold recently tweeting that ideas on social media would be discussed in a meeting, a few changes to the World Cup squad that was announced could be likely.

Their is a scarcity of batsmen in this squad. That fact is blatantly obvious when Sri Lanka are forced to play Dimuth Karunaratne in the middle order, in the face of him being a misfit there, since Sri Lanka have no one to replace the injured Angelo Mathews.

[Video: 'I really don't know the logic behind some of these selections' — Arjuna]

And most of Sri Lanka's batsmen are similar in their style of play: Tillakaratne Dilshan, Mahela Jayawardene, Kumar Sangakkara, Karunaratne, Lahiru Thirimanne and Dinesh Chandimal are all players belong to the same school — the school of accumulators. Mathews is the only player with the ability to clear the ropes comfortably at will, and the other two in the side with that same ability are bits-and-pieces players (Thisara Perera and Jeevan Mendis).

Thirimanne in the fifth ODI at Dunedin played arguably the best knock by any opener to have partnered Dilshan in the recent past. With Karunaratne's triple failures, Thirimanne is the likely candidate to open in the World Cup. This will render Karunaratne useless.

The other misfit in the squad is Mendis. Rahul Dravid opined that the new ODI rules will deter captains from bowling a part-timer, and he went on to state that teams should play five specialist bowlers. Arnold has also been forthcoming about the need to be aggressive by playing an all-specialist XI instead of relying on bits-and-pieces players.

In the ODI series in New Zealand, Mendis has bowled a total of 20 overs to date. It's the same number of overs delivered by Dilshan, who has also picked up the same number of wickets as Mendis, but at a better economy rate. With the left-hander yet to impress with the bat, this puts the place of the leg spinner under question. Dilshan fulfils the role of a spin-bowling all-rounder, so Sri Lanka would be better suited with a fast bowling all-rounder in Mendis's place.

Call in the replacements

Farveez Maharoof's name is often bought up by fans on social media these days, and that's because he is worth looking at. Maharoof, in his last tour of Australia, picked up nine wickets at an economy rate of 5.10. He is also a useful basher lower down the order, and his batting might provide the impetus at the death Sri Lanka so often lack.

Sri Lanka needs big hitters, and a player who can easily clear boundaries is Kusal Perera. Yes, he did fail as an opener, but, that shouldn't deprive him of a place in the lower order.

A combination that works

Picking a general squad becomes a conundrum. with many permutations to consider. Since the ODI series against England a few months back, Sri Lanka's top five have played out 37.32 overs on average in every game, so numbers six and seven only have 12 overs or so to bat. It's a period in which a team's run rate is expected skyrocket, but Sri Lanka have played either Chandimal or Thirimanne at those two positions, or have alternated unsuccessfully between Seekkuge Prasanna and Mendis.

Since the end of the ODI series whitewash in India, Sri Lanka have scored an average of 108.2 runs in the last 15 overs at a run rate of 7.2, which is hardly sufficient considering the top order often lays a a good foundation to launch from. This was exposed in the fourth ODI against New Zealand, when Sri Lankan batsmen wasted the opportunity score in excess of 300. The problem however doesn't lie with the young batsmen, but more so with the positions they have been allocated.

Sri Lanka have struggled to finish innings on a high ever since Mathews was promoted to number five, as neither Thirmanne nor Mendis have managed substantial scores with the tail.

Thisara Perera has the ability to hit them big, but has been inconsistent. His bowling too has lacked penetration and proved costly. Excluding him though cannot be an option, since the all-rounder is one of a few match-winners in the side. His knack of delivering in big games should also provide him some leeway.

Sri Lanka should play Maharoof at seven. He can fill the void if Mathews is unable to get 10 overs from Thisara Perera. Maharoof will also beef up the lower-order batting.

Mathews should move down to six, to finish the innings with a flurry and be there at the end of the innings. Chandimal has excelled at four in Australia previously, but Jayawardene's prowess at that position will force Chandimal to bat at five. If Mathews is reluctant to move down, then Kusal Perera could be slotted in at six; the need is for a man with powerful strokes and quick hands, not for a batsman with a sound technique.

Sri Lanka should also consider playing seven specialist batsmen. Even if Thisara Perera is unable to complete his full quota, Dilshan and Thirimanne can chip in with a few overs.

Sri Lanka have struggled with the ball, which is why they should go with a combination of six batsmen and five bowlers, in order to not let the game slip away in the middle overs from a position of strength.