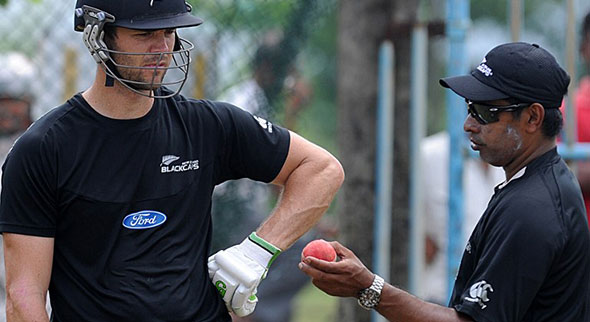 If appointed as the new fast bowling coach, can former paceman Chaminda Vaas revive Sri Lanka’s fast bowling, especially in Test cricket? Not unless certain measures are put in place. To be fair by the current pace bowling coach Champaka Ramanayake, who is contracted with Sri Lanka Cricket until 2015, it should be said that it was recurring injuries to key bowlers that has resulted in Sri Lanka failing to make a real impact with pace bowling in the recent past.

On the other hand, a cursory look at the top order batting, the averages of the batsmen and the first innings totals Sri Lanka have managed to post in the matches played in the last two years will reveal where the real problem lies. That’s another question altogether and it should be addressed by the batting coach Marvan Atapattu who is likely to be promoted as the assistant coach.

The new fast bowling coach will have to grapple with is injuries to pacemen. Experts say there can be two reasons for fast bowlers to pick up injuries: Over straining (over bowling) and lack of bowling. Although fast bowlers may feel it is taxing on them when international schedules are too tightly arranged, more often than not it is the second factor that is causing problems for the Sri Lankans – a lack of bowling.

Fast bowlers need to have a good number of overs under their belts in first-class cricket in order to be match ready. It is pertinent to examine if Sri Lanka’s bowlers bowl enough in domestic matches. The workouts at the gym may take a bowler to a certain distance, but bowlers need to have enough conditioning at bowling if they are to play Test cricket on a consistent basis. One grouse of the critics is that the leading fast bowlers do not play enough domestic matches even when they are available. The critics are absolutely right. It is said that former greats like Dennis Lillee and Richard Hadlee were always ready to bowl one more over for their captains, even after long spells. They were two players who worked hard and maintained their fitness levels. They played enough domestic cricket and always bowled at the nets to their mates.

Do the Sri Lankan pacemen bowl at the nets? Why should they? We have net bowlers who turn up for net sessions and do the bulk of bowling. The squad bowlers just loosen up and bowl a few overs for less than one hour. When there are four of them, they hardly get enough time in, bowling at the nets.

The coaches at clubs and respective provincial teams should encourage pacemen to bowl at least 30 overs in a domestic match. This simply does not happen. A fast bowler usually bowls 100 to 120 overs in the entire season in eight to 10 matches. Experts believe this is insufficient to be a bowler with adequate fitness and endurance levels and to bowl 50-60 overs in a Test match. This is the reason why Sri Lankan bowlers usually do well in truncated formats of the game – ODI and Twenty20 cricket – and even reach top slots in bowling rankings, but cut a sorry figure when it comes to Test cricket. The premier club matches in Sri Lanka are played over three days, whereas other Test playing countries play four-day matches. There again, Sri Lankan pacemen are at a disadvantage.

Traditionally, Sri Lanka’s domestic cricket has been largely spin dominated – a factor that is hugely disadvantages to pacemen. In their eagerness to win matches, some captains start their bowling attack with spinners. This practice does not encourage pacemen at all. Usually, a paceman gets a chance to only bowl in the first innings of a domestic match in Sri Lanka and he is often not required to bowl in the second innings. One way of encouraging pacemen to play more domestic cricket is to prepare wickets that assist them. Preparing green tops and hard and bouncy wickets will give fast bowlers that extra motivation to do well. Constructing fast tracks will not be a futile exercise. Wickets with more clay content and a thatch of grass on them to prevent them from disintegrating will definitely have the pacemen interested in five-day cricket. In a way, fast tracks are the need of the hour, considering the fact that the next World Cup will be played in Australia and New Zealand in 2015.

In a positive sign, pacemen of late have begun emerging from the outstations. Suranga Lakmal, Nuwan Pradeep and Shaminda Eranga are classic examples. However, there is a huge question mark over their fitness and endurance levels, as they easily go down injured. Experts believe the issue is with their humble beginnings in poor environments and that it has not exposed them to proper guidance in their younger days. Whether they consumed nutritious foods is also doubtful. When a fast bowler lacks vitality and endurance levels, he is susceptible to injuries. Has Sri Lanka done enough to protect young pacemen then, one wonders? If Nuwan Pradeep is Sri Lanka’s hope for the future, he should be looked after. But, to treat his injured knee, Pradeep once reportedly travelled to Colombo from Katana in the Gampaha district, standing in a bus.

The fast bowling academy, which operates at the Khettarama Stadium, is the only place where budding pacemen can fine-tune their skills. The academy was started in 1999, with Rumesh Ratnayake taking a lead role, and has produced a number of national cricketers including Lasith Malinga. Approximately 20 cricketers train there when they do not have club commitments. Although all of them don’t enter the national team, the knowledge they gather there comes in handy when they turn out for their club and provincial teams. There, the pacemen also work on their strength-building and conditioning. The academy needs to be developed further; there is an urgent need for a dormitory for outstation cricketers to stay, the process of identifying and nurturing potential fast bowlers needs to be streamlined as well. Pacemen need proper guidance on nutrition and the intake of food not only when they are in the academy, which is for four to five months, but also when they are on their own.

In addition, identifying fast bowlers at a younger age, when they are playing for their schools, is of importance. Sri Lanka Cricket needs to adopt a programme to identify them at school level and nurture them from that point onwards.

If Sri Lanka is to emerge a good Test nation, the chief aspiration of the new captain Angelo Mathews, the fast bowlers need more encouragement and support, for they won’t be around for long, as they have chosen the most difficult discipline of the game and it places enormous strain on their bodies.