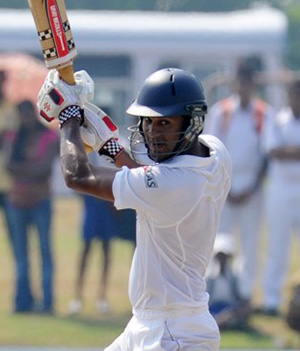 With an important tour of Australia ahead, tough decision must be made
By Gavin Van Hoff | November 29, 2012

Sri Lanka failed to reach the 250-run mark in both innings in the second Test at the P. Sara Oval against New Zealand. Their batsmen’s inability to pile on the runs, to give their bowlers a chance to work with scoreboard pressure in their favour, has been disturbing and the reason for their many Test failures of late.

When Tillakaratne Dilshan, Kumar Sangakkara and Mahela Jayawardene — three batsmen with many years of Test experience under their belts — fail to deliver, often throwing away their wickets in an irresponsible manner, Sri Lanka’s chances of losing are greatly increased.

Armed with a license to attack right from the first ball, Dilshan often perishes early. Sri Lanka may well be risking too much by allowing a key batsman in their side to continue in the hazardous manner that Dilshan does. The loss of early wickets exposes Jayawardene and Sangakkara to the opposition’s new-ball attack and the new red cherry. It is a risk simply not worth taking.

If Sri Lanka’s Test match strategy is to open with one attacking batsman, to score quick runs against the new ball, it is certainly a strategy that has not produced the results. Sri Lanka won just once in the last two years when Dilshan scored a century. He has scored three centuries while opening in 14 Test matches in the same period.

Dimuth Karunaratne deserves the same prolonged opportunity afforded to Tharanga Paranavitana and the latter has to be shown the door. Paranavitana has passed the 50-run mark on 13 occasions out of 60 innings since 2009.

The Dilshan-Paranavitana opening combination has also not worked for Sri Lanka and could prove disastrous in Australia, when Sri Lanka tour there in December.

The selectors deserve blame for not preparing Karunaratne or another opener for the tour of Australia. If he replaces Paranavitana, the inexperienced Karunaratne will be up against tough conditions and extremely quick bowlers. It would be unfair to blame him if he fails. The chairman of selectors, Ashantha de Mel, has proven to us yet again what a great disservice he is doing to cricket in Sri Lanka.

Jayawardene must contemplate moving down the order to make number six his own. Sri Lanka’s brittle batting line up needs a senior batsman to make such a sacrifice. Jayawardene and Samaraweera are ideally suited to face the older ball and take a more circumspect approach to batting in the middle-order. Far too often has Angelo Mathews been left to guide the lower-order — the vice captain deserves a promotion.