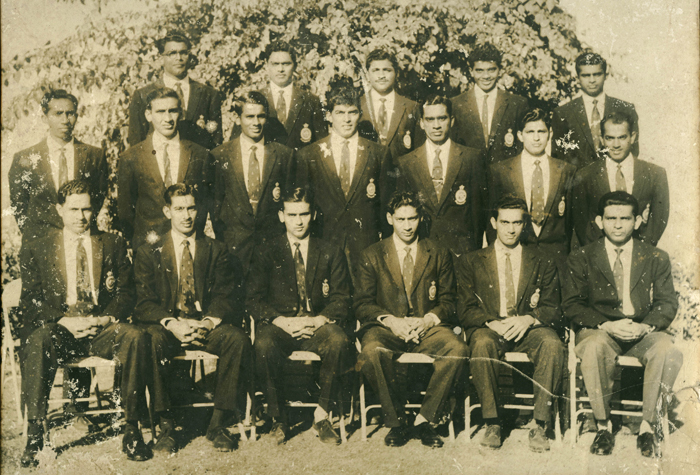 The team that represented Ceylon on their tour of India in 1964.

Sri Lanka’s triumph over India in the ICC World Twenty 20 final at Dhaka took my memory back to a match I had witnessed as a youngster in December 1964, braving the dust of the Central College cricket ground in Bangalore. It was the first-ever unofficial Test match played in Bangalore, and Ceylon was playing an Indian XI.

The small crowd for the Ceylon-India match was mocking and booing the visiting cricketers, I recall vividly.

"They are fit to play football and not cricket," was the rhyme, as though Ceylonese were tennis ball cricketers.

It should be mentioned that the 1964 Ceylon team had some outstanding players like Michael Tissera (captain), Stanley Jayasinghe (who used to play for an English county), Abu Fuard and Anuruddha Polonowita.

Though the Ceylonese suffered an innings defeat in Bangalore, they had the last laugh against India in the third unofficial Test match played at Ahmedabad. They shocked the star-studded Indian team with a four wicket victory. The Indians were bundled out for a paltry 66 in the second winnings. India had big names like Nawab of Pataudi, Duleep Sardesai, Farookh Engineer, Hanumanth Singh and R. Venkataraghavan, but all of them failed, and only Ramesh Saxena, who failed to make the grade in later years, excelled with the bat in the shameful Indian display of indifferent cricket.

The message from these two paragraphs is that never underestimate the opponent. Did not the Netherlands shock England with a convincing victory in the World Twenty20 in Bangladesh?

Sri Lanka had remained an under-rated cricketing nation until 1981, when it attained Test status. The history of cricket in the island nation is as old as that in India. Generations of Ceylonese cricketers went unrecognised. Although some of them played cricket in England, the only opportunities for international exposure came when English teams visiting India paid short visits to the island.

Until around the late 1960s, even the Indians had few opportunities to play international cricket, and the Test matches were few and far between. One-dayers and T20 matches, with the players sporting many hues, were unheard of. The star-studded English team, led by the imperious Douglas Jardine, toured Ceylon in 1934, followed by the West Indies led by John Goddard in 1948-49.

In 1945, the Ceylonese had played the Australian Services Team, as its ship had berthed in the Colombo port on the way back to the players’ sweet home. The team consisted of Australian defence personnel who had survived fighting fierce battles in Europe during the Second World War. They had earlier toured India.

Four star-studded Indian teams had toured Ceylon between 1931 and 1946. The first team led by the Maharajakumar of Vizianagarm had players of the calibre of C.K.Nayudu and Musthaq Ali, both of whom were greater master blasters than those in today’s Indian team. The second was the Indian Universities Team led by Syed Wazir Ali. It had the now forgotten bowling star from Mysore, Y.S.Ramaswamy, who is called “India’s first googly bowler”. He never played Test cricket and died young. Vijay Merchant (the Tendulkar of 1930s and 1940s) was the best known face in this team. Merchant led the Indian unofficial Test team in 1945, and his team included all the three great Ms of Indian cricket: Musthaq Ali, Rusi Modi and Merchant himself. Fast bowler Shute Bannerji and Vijay Hazare were also in this team. In 1956, it was Polly Umrigar who captained India to Ceylon.

A few Ceylonese players used to play in the famous Bombay Pentangular tournament. They included two of the greatest Ceylonese cricketers who faded away without playing Test cricket: Col. F. C. De Saram and the unfortunate Mahadev Sathashivam. They used to play for the Rest (or Indian Christians and others) Team. Sathashivam’s career was curtailed after he was arrested for the murder of his wife. From an aristocratic Tamilian family, Sathashivam was eventually acquitted by the Privy Council in England. He has been described as the “most difficult batsman” they had bowled to, by two great cricketers — former Indian captain Ghulam Ahmed and the first black captain of West Indies Sir Frank Worrell. Apart from cricket, De Saram had led an unsuccessful army coup against Sirimavo Bandaranaike in 1962.

The only other international match Ceylonese cricketers of old had to look to was playing against Madras for the M. J. Gopalan Trophy (from 1953 to 1976). Gopalan had represented India in both cricket and hockey and hardly received any monetary reward, unlike today’s cash-rich and over applauded Indian cricketers. Was not Yuvaraj Singh praised despite his performance at the World Twenty20? Also to be recorded is that the first president of the Board of Control for Cricket in Sri Lanka was a Tamilian — Paikiasothy Saravanamuttu.

There were other famous Ceylonese cricketers in the pre-Test era like Kellaret (spinner), Colin Goonasena and Clive Inman (who played in England), Dennis Heyn and Tony Opatha.