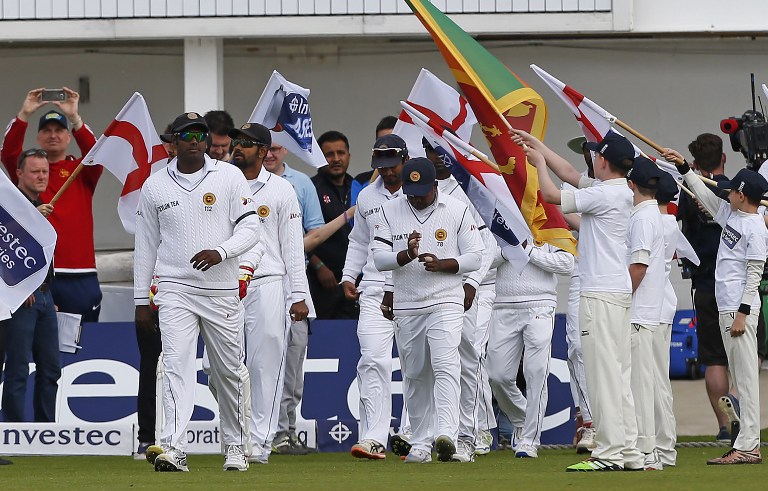 Angelo Mathews's men were spared of a 3-0 series whitewash thanks to rain. © AFP

Even before the Test series began this Sri Lankan Test side had seemingly written off any chance of them winning. The captain was whining about the cold weather, like it was his first trip overseas to a country with a cold climate, while his team-mates were harping on the side being in transition.

The batting line up was demolished by the English repeatedly during the series, with many batsmen getting out prodding and poking indecisively outside off-stump. They reacted as if they were afraid of the conditions and batted like cowards. Few would be grumbling had they lost their wickets attacking. They instead chose to surrender meekly.

Sri Lanka's pace attack, which chief selector Sanath Jayasuriya had trumpeted up to the local media as one of the best in the world, were unable to display the basic skills of fast bowling — delivering the ball routinely with an upright seam. They also cannot move the ball both ways on command. Replays of their release suggest they do not know which position the wrist needs to be at to swing the ball away from the right-handed batsman. Sri Lankan pacers can bowl an in-swinger only because the wrist tends to naturally fall away to the right on release. That they could not even hit the length required to trouble the opposition in English conditions too was unacceptable. They bowled too short and the English batsmen were not tested and were allowed to leave on length very often.

Their fielding was no better. A number of important catches were missed and Mathews too was poor. The Sri Lankan captain has the tendency to prefer run-saving over wicket-taking when a partnership begins to build. Does he not understand that he needs close-in fielders to create pressure and take wickets? In England, even a well set batsman is more likely to edge one than get caught at mid-wicket.

Their performances were deplorable and deserve condemnation. This is not a young and inexperienced side. The majority of players in this Test side have been playing cricket for years. Despite having played more than 20 Test matches, and a whole host of limited over games under their belts, they resembled schoolboy cricketers.

Blaming the tour itinerary and claiming Sri Lanka should have not toured at this time of year, finding fault with Sri Lanka's domestic cricket structure, or blaming the odd bad umpiring decision, is all just foolish. Blame the players instead, as it is they who failed to perform. Blame the coaches for not working on improving their skills. Only one batsman managed a century in the three-match series and that is unacceptable. The quicks were expected to excel in these conditions but could not do as the English did to their batsmen.

Does it seem to you like Sri Lanka's batsmen are under any pressure to perform? It does not look like it. Take Lahiru Thirimanne, for example. He has a free ride in the team despite failure after failure. Is Thirimanne a better batsman than Milinda Siriwwardana? Many would argue he is not, and yet Siriwardana is not a player favoured by Jayasuriya's selection panel and he does not get the same opportunities as Thirimanne has.

It's time to get that whip cracking. Axe those who do not understand the importance of contributing consistently and you may find them fighting harder for their places.