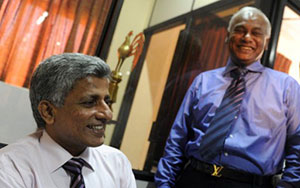 Since the last elections of Sri Lanka Cricket (SLC), the press in particular have focused attention on the eligibility of the secretary to continue to hold office vis-a-vis the constitution of that institution. In recent times, those reservations have even led to allegations of a conflict of interest. This subject has also been debated in cricket and other social circles locally, and attracted the attention of the international media as well.

Surely is it not in the hands of SLC’s membership to clear any doubts that may prevail in this area? Is it not time that a letter was addressed by the membership to the incumbent president seeking clarification as member clubs are entitled to?

On the other hand, the effective custodian of SLC’s constitution is the secretary himself. The current incumbent must have satisfied himself that he was not transgressing any of its provisions in seeking office, in which case a formal statement from the president to the membership to that effect can close the file on this controversial subject.

Neither the president nor the membership can afford to remain silent on an issue as important as this any longer, as it questions the integrity of SLC and also its dignity.

S. Skandakumar is a former secretary of the cricket board and a former president of the Tamil Union Cricket and Athletic Club.