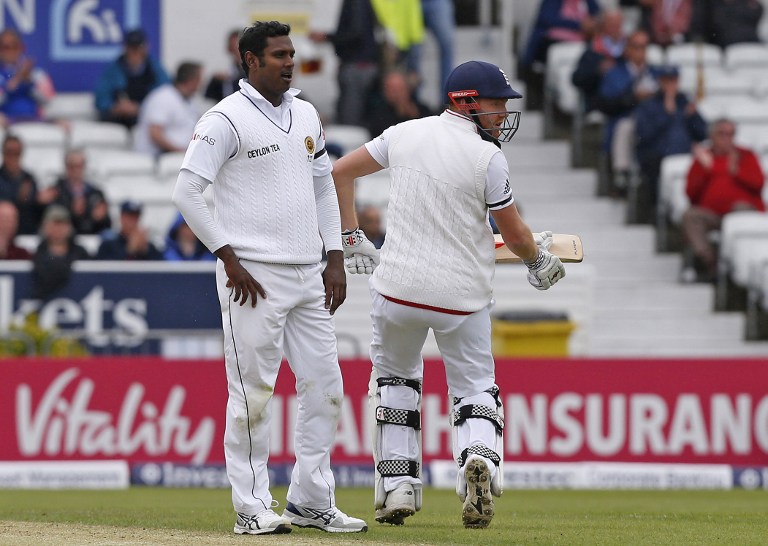 Angelo Mathews is under pressure to turn things around. © AFP

A microcosm of the status quo of Sri Lankan cricket was captured by the cameras during the Test series in New Zealand. Angelo Mathews, the captain of Sri Lanka, was seen with his hands deeply immersed in his pockets, eyes averted and leering emptily at the ground; his thoughts meandering and feet moseying, all this while a ball was being bowled. It was one of those dilemmatic moments in which one would have been confused whether to pity the captain's incompetence or to revile his inanity.

This team is raw, amateurish and has more than just one problem. It's difficult to figure out where reform should begin. The batting is spineless, the bowling is supple, and the fielding is in such a sorry state that it literally needs life support to survive. However, these are not excuses for poor captaincy. Of course, with a good captain this team of ugly ducklings are not going to transform into winsome swans overnight, but definitely they would perform better.

"With a good captain a company, orchestra, any group, can be made to work — a good leader who makes them the best they can be under the circumstances they find themselves in," former England captain Mike Brearley once said.

"You can't transform mediocre players into great players but you can transform them into good ones. Which makes a difference."

Captaincy, according to Brearly, who is considered to be one of the finest captains of the game, can be divided into two main qualities: man-management and technical aspects. Mathews's tactical shortcomings are plainly palpable for he doesn't possess the tactical nous that make captains great, nor has he expounded strategic nuances that characterise good leaders. Two of his most used ploys are bowling short at batsmen, and having Rangana Herath come around the wicket to bowl at the pads. The former gets overutilised — once, Pakistan's tail-end batsman Zulfiqar Babar was ducking even before the ball was bowled at him.

Contrary to his vivacious batting, Mathews's captaincy is lethargic. A young team requires motivation, a serious dose of inspiration and substantial self-belief. The Sri Lankan captain has failed to galvanise his men to make them function as a unit. It is during times of adversity that a greater need for unity is required, but the Sri Lankan team continues to be flaccid when confronted with challenges.

The body language of the players suggests they are not enjoying themselves. There is an inexplicable fear of failure, and it appears to engulf the team when the tide turns against them. The vibes around the team look negative. Of course, the players themselves are individually responsible for motivating themselves to punch above their weights, but if the team is going to collectively feel disconsolate, then a captain has to make sure that he inspires the team. From an utopian perspective, a team with a good eleven seldom needs a captain, but, not often does a team procure the luxury of a perfect eleven. Teams have a captain for a reason. It is a captain's duty to gauge the mood of his team and do what it takes to exploit its fullest potential.

When the captain himself looks uninspired, one cannot expect much from the team. Mathews has proven himself to be a bad man-manager too. It is pertinent to contrast Sri Lanka's attitude on the field under Mathews to the team's attitude under Lasith Malinga. Despite Sri Lanka losing more games than they won in T20Is under Malinga since the WT20 in 2014, the team never ceased to fight. Sri Lanka's spirited manifestation of their characteristic combative, attritional cricket, in spite of ending up in despondency, kept fans entertained. There were poor shots played. There were catches dropped. But the team never allowed these to weigh them down. In the face of making mistakes the team cantered forward, shrugging off the failures instead of letting them grind their spirits down.

Under Malinga, the team appeared desperate for wins. Defeats hurt them and it was evident in the teary eyes of some of the Sri Lankan youngsters in the second T20I against Pakistan in 2015, which Sri Lanka lost by a whisker. It was a sign of a team that hated to lose.

Sri Lanka's dynamism in T20I could also be ascribed to the shortness of the format. In the shortest version of the game, an ephemeral episode of vigorousness is adequate, whereas it will be difficult to sustain it for a longer period of time in the longer versions. But when Mathews took over the helm in T20Is the indefatigable spirit jaded off, so much so one could sense the despicably familiar attitude engrossing the team: the very attitude that resulted in Sri Lanka plummeting in Tests and ODIs.

Before being appointed the captain of the WT20 team earlier this year, Mathews expressed his displeasure in the team Malinga and the then selectors had picked. However, the team Mathews wanted was not so different from what Malinga had given the nod to. This clearly shows that the Sri Lankan captain has difficulties in being accountable for his own inability.

"I was not mentally prepared to take up captaincy in the tournament," Mathews said before the WT20 in India March and April. He had been leading Sri Lanka in Tests and ODIs for more than two years and yet he was unready. Perhaps Mathews could envisage what was ahead, and that's why he wasn't ready to take responsibility. When a captain disowns a team, how could he be expected to change its fortunes?

If these remarks from Mathews was akin to puncturing the wheels of a vehicle, then him unabashedly claiming that defending champs Sri Lanka were underdogs was akin to detaching the wheels. This was the same captain who would easily shrug off a semi-final defeat in the 2013 Champions Trophy saying "we choked".

"The root of it was they were scared to drop catches. When I spoke to them individually, they preferred the catch going to the next man, rather than to them," Jerome Jayaratne revealed, soon after becoming Sri Lanka's head coach.

Any team serious about winning won't constantly worry about the risk of losing a game. But this team seems to be playing to avoid defeats, rather than to win. When Kumar Sangakkara told Mathews: "It comes and goes, but don't be afraid. Take pride in what you do, don't be afraid to lose when you are searching for a win", one should assume that the great man was privy to the root of Sri Lanka's ailment.

Mathews is not directly responsible for Sri Lanka's plight. But with a better captain, the team would show more intent and more fight. Sri Lanka's lack of purpose has already allowed many games to drift into losses.

In 2014 in Wellington, Sri Lanka allowed New Zealand to surge to 524 after picking up their first five wickets for just 159 runs. Pakistan were five down for 96 before Sri Lanka let the visitors off the hook to help them rack up 417 in Galle in 2015. Against the same opposition in Pallekele, the Mathews-led team allowed a target of 377 to be chased down without much trouble. At SSC against India, Sri Lanka allowed the visitors to get to 274 from being 118/5.

In the recently concluded Test series in England too Sri Lanka displayed a similar trend. In Headingley, after losing five wickets for 83, England piled up 298. In Durham, the Sri Lankan team would allow the English tail to accrue 201 runs in the first innings. In Lord's too, after picking up the first four wickets for 84, England was allowed to reach 416.

Mathews has allowed the opposition to get back into the game after prising complete control. To win Tests, opportunities should be firmly seized. Sri Lanka, under Mathews, prefers to watch and wait instead. A good captain would sense the kill and would want to ruthlessly take the game by the scruff of the neck, especially when the opposition loses their top order cheaply. Instead of exerting pressure to strangulate the opposition, Mathews sets them free and hopes the rest of the wickets would fall by themselves. If a team is going to depend on batsmen making mistakes, then rarely can matches be won. This is a cardinal sin, as Sri Lankan bowlers are doing the hard yards to give Mathews that early advantage.

When a win is within reach, Sri Lanka are saddled with the fear of losing. In Durham, in the second innings, Sri Lanka were bellicose with the bat and that helped them get 475. They demonstrated some fight since they were losing the match and there was nothing more to lose. Take your mind back to Galle against India, Sri Lanka's positive belligerence once again paid off, as the team threw caution to the Galle breeze. In the third Test at SSC, Sri Lanka were briefly favourites when Kusal Perera took on the Indian bowlers.

Mathews speaks about being fearless, positive, and playing attacking cricket, but his captaincy is far from being positive. Is he oblivious to his mistakes?

Sri Lanka should look to Brendon McCullum's Cowdrey lecture for inspiration: "I fell back on Gilbert's words; 'All your preparation, all you have ever thought about in cricket, just throw it out the window for this one game.' I reminded the team that there would be no harsh judgement on any player's performance and no consequences for failure."

Sri Lankan players have nothing to be afraid of. They have nothing to lose. Fatal gravity will not take Sri Lanka any further below the rock bottom they are at right now. The island is modest in expectations. No one in their right mind expect this team to win an overseas Test. Sri Lankans don't have a land to save, a treasure to lose or a reputation that could be obliterated, therefore, they can afford to fight freely.

If Sri Lanka can play unencumbered by expectations, and express themselves with positive intent, then the fans will at least have a team that they can enjoy watching. The results don't hurt as much as the meek capitulations do.