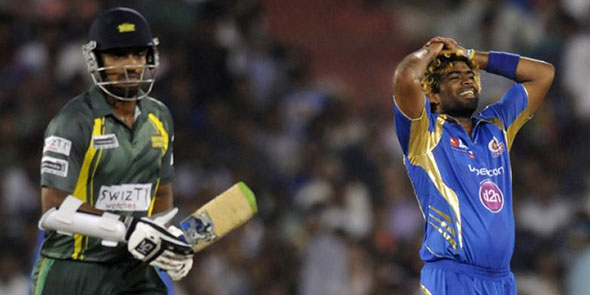 To the surprise of many, Sri Lanka’s team at the Champions League Twenty20 2014, Southern Express, have been more competitive than first predicted. They have not capitulated embarrassingly, despite the absence of the team’s best players, but, there is no denying the fact that Sri Lanka’s domestic T20 champions this year are greatly hindered by the absence of Tillakaratne Dilshan and Lasith Malinga.

Malinga, like all other players faced with the same choice this year, opted to represent his IPL franchise instead, and Dilshan withdrew from the tournament just days before the start citing personal reasons, which allowed his brother Tillakaratne Sampath a place in the squad.

In their two qualifying matches thus far, Jehan Mubarak’s men missed a wicket-taker in the mould of Malinga, and they are surely missing Dilshan’s all-round brilliance too.

"We have not played our best cricket yet, especially with the bat," Southern Express skipper Mubarak conceded after the defeat against Mumbai Indians in their second qualifier. The dew factor, Mubarak said, had made it harder for the spinners too.

Southern Express, unlike a majority of other teams in the tournament, are not a regular domestic T20 outfit, and Mubarak said that the side had very limited preparation time. They played a handful of matches in Sri Lanka’s hastily-arranged Super Fours tournament to qualify for this year’s Champions League.

"It was a very short tournament, so all the players didn’t get a bat and didn’t get a bowl," Mubarak said. "All the preparation has been in the nets, with a few practise games back home.

"Obviously, not having Lasith is a big loss to us, but the young guys, especially the fast bowlers, bowled pretty well today. Hopefully they will take something back from this, and hopefully learn from it before we play Lahore in the next game."

Just how Malinga and Dilshan would have fared against Northern Knights and Mumbai Indians is left to speculation. Southern Express would have been far more competitive with the inclusion of the two senior pros, but would their presence in the final XI have reversed their fortunes?

Despite Mubarak’s insistence that the batting has been poor, what is glaringly obvious is that a number of Southern Express bowlers have failed to create and maintain pressure to make up for their inability to take wickets, which is perhaps what Mubarak’s focus should be on. The opening bowlers allowed openers from both Northern Knights and Mumbai Indians to knock off a majority of the required runs in their run chases.

So, while it was hard for Mubarak to gauge much from the rain-hampered 10-over contest against Northern Knights, it should be apparent to him and the coach now that they need early breakthroughs to minimise the the impact of the first powerplay — whoever they chose to open bowling with, Mubarak has to be looking to take wickets not curb runs, but this has not reflected in his field placings. A better approach is needed if Southern Express are to pull off a miracle in their final qualifier.

Let us however not forget that this is not a team that represents Sri Lanka’s best domestic T20 talent, nor is it Sri Lanka’s best domestic T20 team. Southern Express was conjured up by the cricket board, just to ensure that a team from Sri Lanka would participate in the lucrative Indian league. With that in mind, our criticism must be reasonable and our expectations realistic.

The views and opinions expressed in this article are those of the author’s. Click here to submit your own opinion articles.