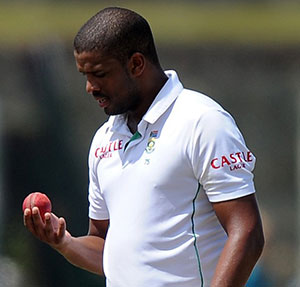 There was a great furore following the aftermath of South Africa’s first win at Galle after Vernon Philander was found guilty of ball tampering.

On the pivotal day three, the game was interestingly poised, with vice-captain Lahiru Thirimanne and the in-form captain Angelo Mathews forging a 54-run partnership after the loss of early wickets in the morning. What followed from South Africa’s premier strike bowler on a placid pitch can only be described as a dramatic utilization of reverse swing, where he turned the match with a fiery spell. Coming out after the tea break to face Dale Steyn became a difficult proposition, as he tore through the middle order with a spell of 5-3-8-3.

After conceding a 163-run lead in the first innings, Angelo Mathews’ Sri Lankans were always behind the eight-ball in the match. They were chasing 370 to win on a wearing day five Galle pitch.

The art of reverse swing was developed and mastered in Pakistan. According to Shaharyar Khan, former chairman of the Pakistan Cricket Board, paceman Salim Mir invented reverse swing. Mir, who played for the Punjab Cricket Club in Lahore, taught it to his teammate Sarfraz Nawaz.

The art of reverse swing was later mastered by the legendary fast bowling partnership of Waqar Younis and Wasim Akram, and they believed that in order to achieve this you had to polish one side of the ball by shining it, while allowing the other side of the ball to be scuffed up. In order to scuff the ball up fielders are known to throw the ball into rough patches in the surrounding pitches or outfield on the way to the keeper, as well as constantly throwing the ball to the keeper, as the keeper’s gloves are rough enough to cause scuffing on the ball.

In compromising footage, Philander was clearly seen digging at the surface of the ball with his fingernails during South Africa’s first Test victory at Galle, which caused significant damage and scuffing to one particular side. In addition, he committed this illegal act by attempting to disguise his left hand with his right hand, so as to presumably hide the act from the on-field umpires and the cameras.

The television broadcaster Ten Sports caught Philander breaking the laws of the game: Law 42.3 states that players are not allowed to commit the actions of: "rubbing the ball on the ground, interfering with its seam or surface, or using any implement that can alter the condition of the ball to thereby gain unfair advantage."

Following review of the footage, the umpires had no other choice but to immediately to charge and fine Philander $2250 — a fine which he pleaded guilty to, which amounts to 75% of his match fee. A rather insignificant price to pay for what led to be a match winning spell from Steyn.

The umpires had the authority to suspend Philander after his misconduct, but perhaps they felt that him playing in the next Test match at the Sinhalese Sports Club, known as a fast bowler’s graveyard, is severe punishment enough.

Footage surfaced online of Philander’s teammate Francois du Plessis tampering with the ball in the second Test match against Pakistan in Dubai last year, which also reveals involvement by Philander. On that ocassion, du Plessis was fined 50% of his match fee, and he pleaded guilty to the charges after being caught on camera scuffing up one side of the ball on the zipper of his trousers.

Thus, the Proteas’ reputation for cheating has been established, but the fact that it has happened twice brings up the question: is the punishments for such corrupt acts severe enough to deter players?

The views and opinions expressed in this article are those of the author. Click here to submit your opinion articles.