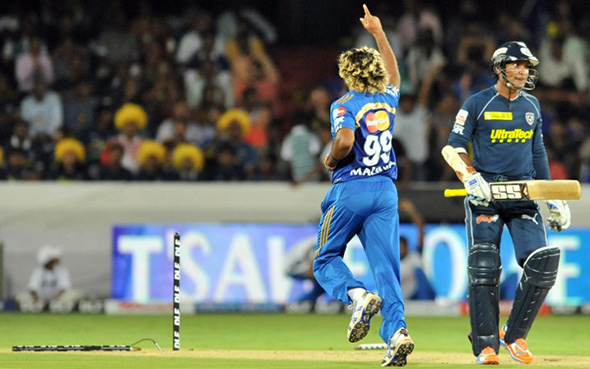 Questions over the IPL’s benefit to Sri Lankan cricket continue to be raised. © AFP

Political interference and corruption is often cited as the biggest problems facing Sri Lankan cricket. There is no doubt that they are significant challenges and have a detrimental effect in the operational effectiveness of Sri Lankan cricket, with strategic implications. However, we need to recognise the IPL and similar T20 leagues as the single biggest strategic threat to Sri Lankan cricket and respond accordingly. Such leagues provide competition for player time, exacerbate resource gaps between national cricket bodies and potentially impede young player development. It is to be hoped that, for the sake of Sri Lankan cricket, the decision-makers at SLC are losing sleep over this.

Since the IPL started, and we felt its impact with the cancelled English tour, the brouhaha over the IPL is almost an annual exercise. Every year in April and May, Sri Lankan fans renounce their heroes and gnash their teeth as their stars take part in this alien competition, but take a peek at scorecards just to make sure their players are doing well. While some of the fans still regard the IPL with distaste, others have come to regard it as a fait accompli, and note the financial and other benefits accrued to the players. The players themselves have struggled to achieve a balance, and stars like Lasith Malinga and Angelo Mathews has faced public relations minefields due to IPL participation. The fact of the matter is, while playing for the country is important for all of us, the players naturally also yearn to maximize their income. Hence, the IPL and its clones are a net positive for the experienced players, and expecting them to feel otherwise is consistent with our hero worship, but unrealistic and unfair to the human being who resides underneath the heroic shroud we have created.

However, we have to draw a stark distinction here between the interests of the players and Sri Lankan cricket as a whole. Supporting players’ participation of foreign domestic leagues in lieu of SLC incompetence would be extremely short-sighted. Let us be clear that the 10 percent player rental payment, notwithstanding the IPL and its clones, is a strategic threat to Sri Lankan cricket, which impacts its very existence. If SLC does not respond with acumen, the playing time of the national team would be increasingly squeezed out of the calendar. While we should respect player choice, we should also expect and demand that SLC should act in accordance with the interests of Sri Lankan cricket as a whole. While we do like Arjuna Ranatunga, Mahela Jayawardene etc., what matters most at the end of the day is the name in front of the jersey, not the one behind it.

This should not be taken as a call to unnecessarily aggravate the players or the BCCI — that would be counter-productive. SLC would be well advised to adopt an approach of being gentle, but firm, with the BCCI and the players. The goal should be to maximize the twin objective of SLC success and player income to the extent possible. Since we have two objectives, and numerous other constraints, the final result will be suboptimal for any one of the two individual objectives. However, SLC should not view that as an impediment, and they must be willing to arrive at a pragmatic solution. It is to be hoped that if approached with a proper plan and attitude, players themselves are willing to make sacrifices to a certain extent for the greater good, but SLC should not deviate from its principles, which can impact the long-term health and viability of Sri Lankan cricket.

The state of global basketball and soccer are cautionary examples of what could happen when club and franchise-based leagues dominate the sport. In both these sports, star players play for their country primarily in global/regional tournaments, which take place roughly once every two years. For lesser countries, there are many instances where their star players do not turn out for their country at all. There are differences between these two sports and cricket, critically in their governing structures and historic antecedents, but, as the guardians of the sport, SLC has to recognise and react strategically to this threat.

The tragedy of 2009 was that it created an irreversible unofficial window for the IPL, and it has since morphed into adding an official window for the Champions League in the FTP. By that, SLC has already ceded up to 10 weeks of playing time out of the annual 52 weeks. It will be only a matter of time before the IPL and other leagues demand that their tournaments be extended for increasingly larger periods of the calendar. The smaller cricketing nations, including New Zealand, West Indies, Pakistan and Sri Lanka, who are most affected by this challenge, need to plan and coordinate a joint response to such a proposal. Foregoing this common policy in lieu of short-term carrots offered by the BCCI would be a case of making your own coffin. The BCCI, rightly, acts for its own benefit, as evidenced by the non-participation in the SLPL, and SLC should be wise to keep that in mind.

The surest way of dealing with this challenge is improving the SLC product and SLC revenues. The cricket board needs to develop a revenue model that enables them to offer more attractive packages to cricketers. It would be a mistake for SLC to go in the opposite direction of reducing player wages, since the need is to focus on increasing the pie rather than fighting over its pieces. A more attractive package should include long-term performance-based contracts. Such contracts have the dual purpose of locking in Sri Lankan talent and providing more security to the players. While Sri Lanka may never approach the heights of IPL pay packages, SLC should do their utmost to provide a sense of value and security to the players.

The board should also focus on developing and utilising Sri Lankan cricket and its cricketers as a global brand, focusing on the key sectors of the Sri Lankan economy. Synergies with some of Sri Lanka’s best known products, including tea, garments and tourism, should be explored and exploited, while taking initiatives to cater to the needs of Sri Lankans based abroad. In terms of revenue, the success of the SLPL is also important for the future of Sri Lankan cricket. If SLC are not able to meet the revenue targets via the SLPL, they should explore an Asian Premier League jointly with Pakistan and Bangladesh.

Such revenue generation is even more important when you consider that revenues of the Indian, Australian and English boards would increase with their T20 leagues. As in war, in the long term, the economic wherewithal of the competing cricket boards would be a decisive factor. While in the short term we are competitive due to natural talent and the passion for cricket, over the long run their investments in more technology, facilities and support services could create a significant gap in performance. Cricket, as in everything else in the modern world, will be increasingly driven by technology, and there are already signs that SLC is falling behind.

While we strive to increase revenue, SLC need to also maximise the utilisation of available funds. Sri Lankan cricket can ill-afford to spend on construction projects not essential to its strategic plan, have high administrative overheads or experience monetary leakage due to corruption.

Whoever is elected in the coming SLC elections faces a significant challenge in navigating through these threats. They should perhaps draw inspiration from the impressive feats of the Sri Lankan team, who have performed admirably in spite of administrative missteps, to visualise the heights Sri Lanka could reach if player talent, fan passion and administrative competence are combined. If they fail however, Sri Lanka could become just a talent pipeline to IPL teams, to the eternal misfortune of Sri Lankan cricket fans who love their national team.