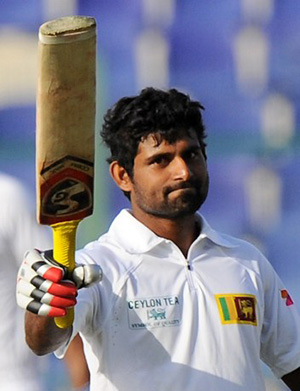 Kaushal Silva may never be a fan-favourite because of his slow scoring rate but batsmen like him, who are technically sound and harder to knock over, make a significant contribution, although they are not nearly as entertaining as some others.

Sri Lanka has a batsmen in Silva who puts a price on his wicket, and cares not for how quickly he scores nearly as much as he cares for how long he bats for, which is a good trait missing in many of Sri Lanka’s top-order batsmen.

Among other things, Silva displayed in both the first and second Test against Pakistan sound technique and tight defence, which even the much-hyped Dinesh Chandimal and Angelo Mathews do not possess. Chandimal did tighten up his batting in the second Test, but he is one batsman that swiftly comes to mind when one thinks of a player in the international scene with an astonishingly embarrassing technique. One can say the same about Mathews too.

Coming back to Silva, the 27-year-old emphasised the value of his immense first-class experience by thwarting Pakistan’s brilliant new ball attack, which did not allow the Pakistanis to get at Sri Lanka’s middle order with the shiny red cherry. It may not seem like much to fans, but it means a whole lot to his team-mates.

In the ongoing Test series against Pakistan in Dubai, Silva has thus far made 254 runs at 63.50, with three half-centuries and a highest score of 95. It’s hard to fault the second-highest run-scorer of the series for not converting half-centuries into centuries, but that will still happen and memories of this series will fade.

Therefore, it is up to the selectors to recognise the value Silva brings to the Test side and stick with him, and that includes sticking with him through the tough times. All batsmen hit rough patches and come up against good deliveries.

The selectors need to understand the importance of players like Silva and even Lahiru Thirimanne and Upul Tharanga, and not succumb to unintelligent criticism from the Sri Lankan media and fans. The players who play a more traditional form of cricket have an important role to play. It is the selectors who must be criticised for axing them after setting unrealistic expectations upon them.

While some pundits believe that Sri Lanka’s first-class statistics are an inaccurate measure of a batsman’s abilities, scoring thousands of runs over an extended period is no mean feat. Players with accomplished domestic records and years of first-class experience should not be ignored for players who appear immensely talented after only a handful of domestic games.