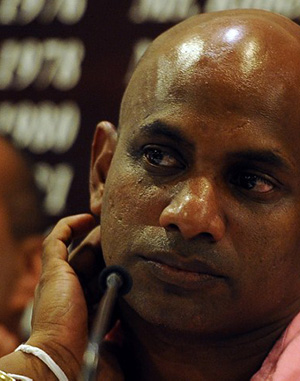 When Sanath Jayasuriya was first appointed as chairman of selectors, there was a certain amount of rumbling about him being a political appointee, and how it will signal the beginning of the end. I respectfully disagreed, and even wrote at the time about why I think it will actually benefit the team. I am still of that mindset, and the recent Test comeback against Pakistan is all the evidence I need, to substantiate that opinion.

Before you imagine that this is going to be a piece in support of SLC and its bunglings, let me say this: This is a piece that attempts desperately to hang on to some sense of what Sri Lankan cricket has become. It is about having some faith and optimism in the future, or maybe I’m still hungover from the New Year’s Eve party I didn’t go for.

My friend Hilal Suhaib believes Sanath Jayasuriya should step down, and I respectfully disagree. The Rajapaksa regime has made a plethora of political appointments, and I said in a previous column why this appointment would be the appropriate one. Jayasuriya hasn’t caused the downfall of Sri Lankan cricket. That was caused when successive interim-committees were appointed and the damage was done well before Jayasuriya was an administrator. He has now been tasked with picking talent out of Sri Lanka’s talent cupboard, which is bare. Jayasuriya’s problem, and ours, is that there is nothing out there. Nothing of note. Barely a player of any international magnitude.

Suhaib has suggested in his editorial that Jayasuriya’s repeated use of the stick, and the recent examples of Lasith Malinga and Thisara Perera being read the riot act, as evidence of political/administrative thuggery. While I agree that there maybe a case to be made for some professional decorum, the job has been done. Not so much with Malinga and Perera, but the message has hit home loud and clear to all the players.

The way Dinesh Chandimal and Angelo Mathews responded in the first Test match against Pakistan is ample proof, that the younger generation of Sri Lankan players, not being model professionals themselves, sometimes need a giant kick up the backside.

I was horrified when I read a piece recently, where Mathews stated that he hoped that his 91 and 157 would justify his place in the team. This from our captain, who is clearly insecure.

Chandimal had done sweet bugger all to justify his immense potential until a couple of few and far between innings. Surprisingly, for whatever reason, the public have not called for his head as loudly and persistently as they would have called for Thilan Samaraweera’s or Jehan Mubarak’s or Chamara Kapugedera’s in similar circumstances.

Chandimal too, after the Perera ultimatum, performed.

The chorus of decent innings by the young pretenders was a little too coincidental to be… well, coincidental.

Jayasuriya had finally laid down the law. If you don’t perform for your country, you cannot have jaunts in lucrative overseas T20 tournaments. Suhaib thinks that’s authoritarian. I think that’s fair enough.

Perera is fat and slow. Even though he has been offered a contract of undisclosed value, it is unlikely he will play many games because the BBL’s current crop of young Aussies are probably way better.

Jayasuriya’s argument, that he must work on his game and play against younger opposition, is not the worst call in the history of selection. It will be nice if he can get fit while he was at it. I fully endorse the thinking, especially for the ripple effect it obviously had on Mathews and Chandimal, and the rest of the wider pool.

The thinking is simple. Your national team — unlike in football — is not merely a showpiece where you pitch yourself to the highest bidder. It is a serious business where you have to perform and play your best cricket for your country. Nobody will disagree that neither Perera, Chandimal, Mathews nor Malinga are doing anything remotely like their best. Why should they, when their selection is ensured and participation in other leagues is a mere formality? Suddenly, Jayasuriya has laid down the unpopular mantra that they actually have to sing for their supper.

With very little talent outside the national side, with the exception of maybe Angelo Perera and Kithuruwan Vithanage, Jayasuriya’s selections have not been as errant as people would have you believe. Injuries to Chanaka Welagedara, Nuwan Pradeep and sporadically Suranga Lakmal and Shaminda Eranga have necessitated the use of a completely unfit Malinga. That the best motivation for performance is competition for places, is not a mantra a lot of people have taken on board. We don’t have enough Adam Gilchrists, Sonny Bill Williams pushing the Ian Healys and Ma’a Nonus of this world to be consistently at their best.

In those unenviably talent-shorn surroundings, the only avenue open to Jayasuriya is to do what he did. And players know that a team that can lose with them, can very well lose without them. Mathews and Chandimal responded pre-emptively. Can Malinga and Perera do the same? Time, will tell. Either way, the ultimate beneficiary will be Sri Lankan cricket fans. As I’ve said before, Jayasuriya wants to win. And he is in a better position to try and do that now, than even when he was captain.

So do I think Jayasuriya should step down? Absolutely not. I personally think he is the one guy who is making sure that things happen on the field despite the complete lack of structure off the field. If Jayasuriya wasn’t around, we would be in a much worse situation.

Let me be clear, and state for the record, that we are not in a good situation. We would just be in a worse one. This bad situation has been created by years of bungled administration, cronyism and favouritism. There were rumours that a former selector, who was ever-present in every committee, would pick players on payment. There were allegations that captains would pick players from the same ‘stables’, so to speak. All allegations and nothing really substantiated, but, things would have been pretty bad when Kumar Sangakkara blew the whistle on it all at Lord’s. The damage had already been done.

When I wrote my last blog on Jayasuriya’s appointment, I said that it would keep Sangakkara and Jayawardena on their toes. True to form, Sangakkara has responded with the form of his life; batting aggressively and winning matches he would have merely mitigated a loss in previously. His 50s and 60s are now more valuable than even some of his previous hundreds were. Is there a causal link between Jayasuriya’s appointment and Sangakkara’s resurgence? I don’t know. But the timing cannot rule it out.

There is no denying that Jayasuriya the captain and Jayasuriya the politician may have their flaws. However, Jayasuriya the selector has had more positive impact on performance than anyone else with a smaller stick to wield.

Yes, there are problems. Vithanage’s constant juggling, his differing status as a Test specialist and ODI number-nine. The picking of so many wicket-keeper batsmen in our ODI side hampering the fielding unit. The Ramith Rambukwella selections. All these are evidence of flawed selection, but every committee has had these brickbats thrown at them. Are they resignation worthy? Probably not.