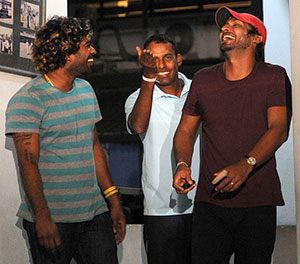 During and after the recent contract dispute between Sri Lanka’s cricketers and the island’s cricket board (SLC), a spotlight was cast on the players’ earnings, with some media outlets and board officials even claiming that the players earned as much as four million rupees (nearly US$32,000) a month.

But one of Sri Lanka’s most successful Test batsmen, Thilan Samaraweera, who recently announced his retirement from international cricket, categorically denied this.

"I have never got so much money as a salary," Samaraweera told reporters in Colombo last week. "I think a wrong impression has been made to the public.

"Players play for the country and not for the money."

Samaraweera added that while there were a few issues that needed to be ironed out with their new contracts, the players "didn’t ask for anything new out of this contract, and the clauses were the same as what has been signed since 2009."

Many of Sri Lanka’s contracted cricketers — including Samaraweera prior to his retirement — are not considered by Indian franchises for the lucrative IPL tournament, and therefore they are dependent on their wages from central contracts.

A statement released by the Sri Lanka Cricketers’ Association (SLCA) said that the SLCA, which strives to protect the rights and interests of players in Sri Lanka, was disappointed with "the lack of respect and regard shown to the national cricketers", as a result of "misleading and inaccurate claims".

The players’ association said that the players "have adequately shown their willingness to be flexible", in regards to key issues pertaining to their new contracts.

"The SLCA views the fact that the players’ consent was not sought by the SLC on the new terms before handing over the final contract as unfair," the statement said.

"The SLCA verily believes that the removal or reduction of … long-standing benefits from the new contract presented by [SLC] without proper and fair negotiations will have an adverse and unfair effect to all players.

"In addition, at the request of SLC, the national players also agreed to receive a significantly reduced share of their entitled percentage of the guarantee fee for the ICC World Twenty 20 in 2012.

"However, SLCA states that the national cricketers are neither responsible nor should be unfairly penalised for the financial constraints of the SLC.

"The SLCA states that the players signed the contracts this year, as they consider it an honour to play for Sri Lanka."

Since the end of the contract deadlock, Sri Lankan newspapers have been highlighting the income of players in an attempt to perhaps suggest that the players are being remunerated excessively despite their recent pay cut.

These articles have almost always been accompanied by interviews with the cricket board’s secretary Nishantha Ranatunga, who claims that the board pays a handful of cricketers a large percentage of annual revenue.

Ranatunga however utilises data from a single year, in which the board made little revenue, to justify his claims.