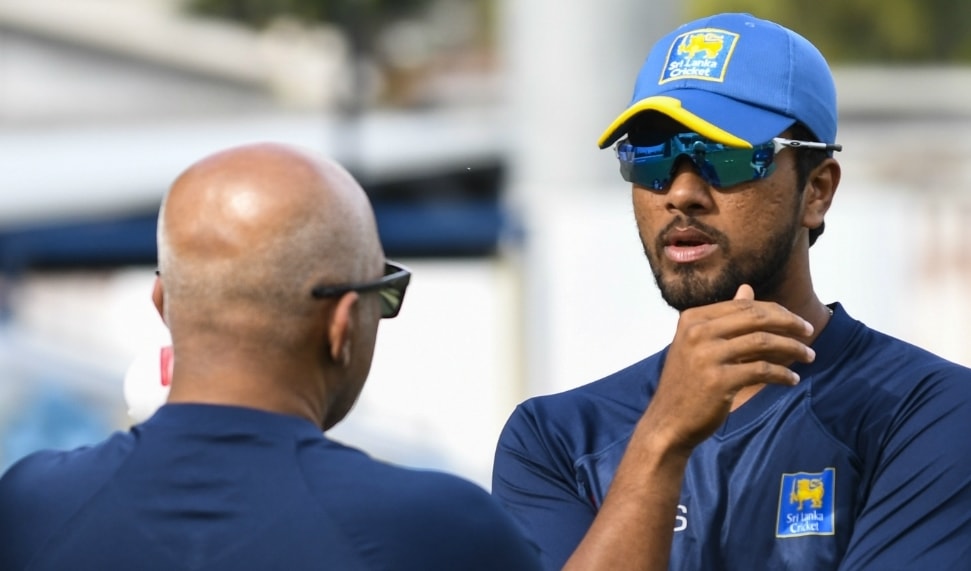 Sri Lanka has been rocked of late by allegations of match-fixing in domestic cricket, ball tampering and behaviour by players and officials contrary to the spirit of the game.

In the Caribbean this week, Sri Lanka Test captain Dinesh Chandimal was found guilty of ball-tampering and was seriously reprimanded for his actions.

The morning of the third day's play of the second Test match against West Indies in St Lucia saw Sri Lanka, under orders from the team manager and coach, holding up play for two hours after they were informed of the ball tampering charge. Reports suggest Sri Lanka's team management on tour were contemplating forfeiting the game in protest of the allegations levelled against their players.

The team subsequently took the field, and having failed to secure victory on the final day, they were knocked back with the news their skipper had been found guilty of ball tampering and would be suspended for their next match. Chandimal appealed the decision by the ICC, but that tactic too failed — it was dismissed after another hearing.

To make matters worse for Sri Lanka, along with Chandimal, coach Chandika Hathurusingha and team manager Asanka Gurusina were also charged for contravening the ICC's code of conduct. It was determined their actions were contrary to the spirit of the game. All three pled guilty to the offence. This damning judgement was in relation to Sri Lanka refusing to take the field for nearly two hours.

Sri Lanka were fortunate to not have lost the series in St Lucia because of their decision to protest, given that they were 1-0 down in the series. They would bitterly regret the time lost, as they were in a commanding position on day-five and ran out of time to bowl the Windies out. 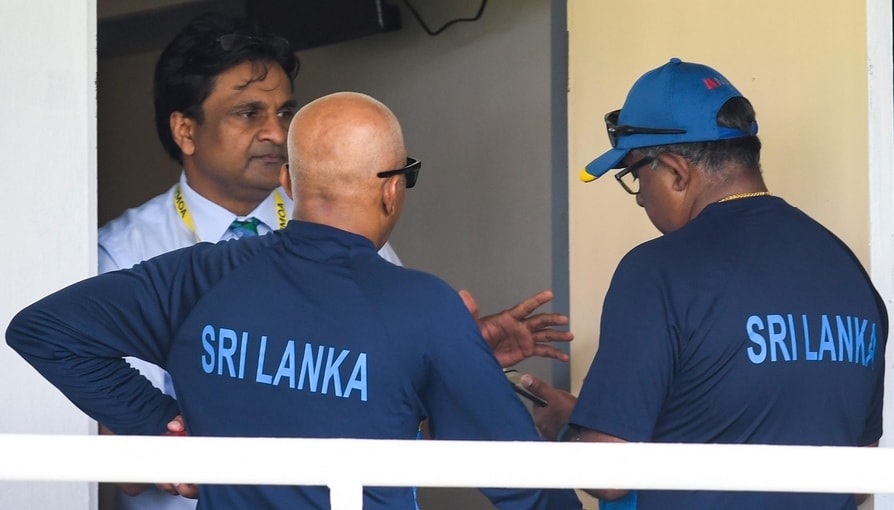 Apart from these events in the West Indies, SLC has been dogged by issues for some time now. Gross mismanagement, with political and other unwarranted interference in selection of players, and a system that allows unscrupulous individuals to be elected for key SLC positions all get in the way of the players achieving success on the field.

To the general public however, the cricketers have for decades been seen as a beacon of morality, national unity and pride, but, now, like SLC officials, the players' own conduct and ethics are in question.

In the 1990s, Sri Lanka was known on the international stage as a country torn apart by an ethnic war and a victim of two separate insurrections. In 1996, Sri Lanka's cricketers did the unimaginable and they won the World Cup. Almost overnight the country was talked about in the international media as the tiny island in the Indian Ocean that was rewriting the course of cricket. The big-hitting style of Sanath Jayasuriya and the unorthodoxy and genius of Muttiah Muralitharan had suddenly shed a new light on this tiny nation.

Cricket stars continued to emerge, as the likes of Mahela Jayawardena, Kumar Sangakarra and Lasith Malinga took Sri Lankan cricket to new heights. Sri Lankan players were suddenly sought after by overseas teams and quickly becoming household names around the cricketing world, and those of us from this tiny tropical island finally had something to boast about and take pride in.

While the team and players went from strength to strength with their exploits on the field, the mismanagement and corruption within the administration of SLC remained. Controlled by a handful of individuals with connections to politicians and cricket clubs who vote at the SLC elections, the guardianship of the game was rotated between inept figures and no meaningful progress ever took place. It was always a few steps forward and many steps backwards — year after year, administration after administration.

It has all eventually caught up with Sri Lanka though, as today the performances of the team has embarrassingly declined.

The emergence of the IPL saw star players and the board give greater precedence to that tournament than the national team. In 2009, SLC postponed a tour of England and allowed the players to participate in the second edition of the IPL. While many fans viewed this as the cricketers picking the IPL over Sri Lanka, supporters still stood by the team and condemned the administrators for forcing the players to make such a decision, as the tour of England, which clashed with the IPL, was organised in a hurry by the then SLC chairman Arjuna Ranatunga (was staunchly anti-IPL) so that the ECB could find a replacement for Zimbabwe, who were originally scheduled to tour England until the ECB decided to scrap the tour.

The players were backed by most of the public and realised cricket fans were buying their narrative. Failing to recognise their own contribution to the fiasco, the players perhaps felt they were above criticism and held the moral upperhand.

In March this year, Australian captain and world number one batsman Steve Smith, along with David Warner and Cameron Bancroft, admitted to premeditated ball tampering. The outcry in Australia was loud, with Smith and Warner being slapped with a one-year ban each and Bancroft with a nine-month ban by Cricket Australia (CA).

The ICC themselves were far more lenient, imposing a single Test match ban on Smith, while Bancroft was fined and issued three demerit points. Warner escaped any punishment from the ICC. The Australian cricket authorities were essentially forced to take strong action by media and public outrage.

Unfortunately for Sri Lanka, a similar outcry over the actions of Chandimal has not been witnessed and SLC appears to be gearing up to reward dishonesty.

Video footage released by the ICC confirms Chandimal put something in his mouth before proceeding to wipe his saliva on the ball to shine one side of it. Chandimal's response has been to deny it all and claim he had almonds and lozenges in his pocket. He said he could not remember what he used in the video clip used as evidence to convict him.

During the course of the ICC hearings, Chandimal decided to employ the now infamous 'I do not remember' defence, when asked what he had put in his mouth. From the footage it is clear whatever he had in his pocket was there solely to assist in shining the ball, almonds it was not.

Similar to the planning done by the Australian trio to ball tamper, Chandimal's actions suggest that this was not a spur of the moment decision. However, SLC and the public have been silent about his shameful actions. Sri Lanka's media have not called for him to be stripped of his captaincy and the public have not demanded he be banned.

In addition to Chandimal's ball tampering sentence, Hathurusingha and Gurusinha too have been charged by the ICC for their decision to hold up play in protest. Both officials could face bans by the ICC.

SLC was willing to bear the legal expenses for Chandimal, along with the national coach and team manager, to defend them and prevent sanctions by the ICC. Rather than admitting fault, SLC administrators were hoping to have Chandimal and the rest pardoned on a mere technicality.

SLC initially argued the players were not informed about the charges and the change of ball until the morning of the third day. Match officials have 18 hours to decide whether charges should be levelled. It appears as though Sri Lanka were hoping to fight the charges not based on the innocence of the trio.

The Sri Lankan public have gone easy with their criticism of the national captain and have chosen to question the ICC's sentence handed down to him.

Ball tampering is not a new phenomenon for Sri Lanka. In November 2017, Dasun Shanaka was caught ball tampering. On that occasion, he was caught picking at the seam of the ball, which for many cricket followers can be accepted as a spur of the moment decision (not pre-planned like Chandimal's lozenges in the pocket). Shanaka's indiscretion escaped the public gaze, with many supporters having not been aware of such an issue until Chandimal's recent transgression.

The fans, who have placed the game and their players on a pedestal, must take it upon themselves to protect the integrity of the sport, as SLC cannot be counted on to do the right thing.

The Al-Jazeera documentary that exposed SLC administrators and players discussing match-fixing did not elicit the type of outrage it should have. SLC suspended those involved for an unspecified time period and claimed they were assisting the ICC with investigations into the matter. But it remains unclear what, if any, investigations are taking place. The public have decided to turn a blind eye to this, choosing instead to suggest that SLC is the victim in this case too.

The Sri Lankan captain was caught red-handed cheating, attempting to gain an unfair advantage. No credible explanation was provided during the inquiry to explain his actions. As expected, the ICC found him guilty and handed down their sentence. Furthermore, the captain, coach and team manager all delayed the game for two hours. Unless the team was considering forfeiting the match, any decision to contest the charges should have been taken after the day's play. Either way, the matter was not handled in a professional manner and displayed poor thinking by the team manager and coach.

As supporters of the game, we must demand better from our cricketers and administrators. Corruption runs rampant in Sri Lanka, and cricket is certainly not immune to this, but we must however not accept this as the new norm from our players and cricket board officials.

Inaction from fans will allow Sri Lankan cricket to reach new lows from which it can never be resurrected. Speak up. Resist. Protest.