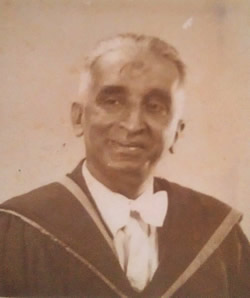 September 3 was the 35th death anniversary of J.B.C. Rodrigo, the Oxford-educated principal of Prince of Wales College in Moratuwa from 1933-1959. JBC, as he is known, had his secondary-school education at Royal College, Colombo, and Trinity College, Kandy. After he completed secondary school, he joined his alma mater Royal College as an English and Latin teacher. JBC later moved to St. Thomas’ College in Mount Lavinia to teach and serve as the master in charge of cricket. Dudley Senanayake represented St. Thomas’ at cricket during this time, while president J.R. Jayawardene was one of JBC’s students.

JBC went to Oxford University, and played cricket for Keble College alongside the Nawab of Pataudi (Snr), who later played for England and India. After graduating, he joined Lincolns Inn and passed out as a barrister at law.

He then returned to Ceylon to serve his motherland. After a stint at the Bar, he preferred to pursue a career in teaching. The legal heirs of Prince of Wales’ College, the de Soysas, invited him to take up duties as principal of the school, which he willingly accepted.

The ground at the school is a living testimony to JBC. The first step taken was to make the ground bigger and suitable for all sporting activities. It is the same, ground present today, except for the turf wicket. A majority of the work was done with the sweat and toil of the students at that time. To raise funds JBC, his staff and pupils staged plays, including William Shakespeare’s Julius Caesar in which JBC was cast in the main role. A carnival was also held and other projects undertaken. An upsurge in the standard of the cricket was almost immediately felt. In l935, Prince of Wales’, captained by E. F. de Mel, were unbeaten.

In JBC’s time as principal, many great cricketers were produced. In 1944, Cecil Peiris scored four consecutive centuries within a short span of seven days, inclusive of twin centuries against Kingswood College, Kandy. A cricketer of repute to emerge in late 1940s was H. I. Fernando, a brilliant left-hand batsman who represented SSC and All-Ceylon. Other outstanding cricketers around the same time, nurtured by JBC, were Stanley Fonseka, Nisal Senaratne, D.S. de Silva and Paul Devadasan, who all played for Ceylon Cricket Association (CCA).

JBC’s contribution towards the game have been immense. His son Lasantha Rodrigo too was an outstanding cricketer in the mid 1950s, playing for the SSC as a schoolboy. Lasantha Rodrigo represented Ceylon, and toured India to play an unofficial Test series with the Indian Test team, captained by the Nawab of Pataudi (Jnr). Ceylon won the third Test, which was our first victory against India at cricket. A unique feature was that JBC and the Nawab of Pataudi (Snr) played together for Keble College while their sons played against each other, for their respective nations.

Furthermore, JBC was the president of the Schools Cricket Association and a member of the Board of Control for Cricket in Ceylon. He is remembered for utilising his position to promote and develop cricket standards at Prince of Wales’ and to bring it on par with other well-known cricket playing schools. His knowledge of the game was second to none. His knowledge on cricket or in education was passed on to whoever who sought it, myself included.

In the summer of 1954, while on a short holiday in the UK, JBC was made an Honorary Member of the MCC – a rare honour for a Ceylonese at that time.

During JBC’s time as principal of Prince of Wales’, discipline was at its peak. In his immaculate dress, Oxford cap and gown, he would stride into the main hall to conduct assembly. Many were overwhelmed with his dignity and oozing personality. JBC was famous for reciting poetry from Shakespeare, Wordsworth, Milton and other writers. When he made speeches at school functions, or conducted assembly, he would quote from the greats to emphasise a point. Many are the village lads and the not so well offs who have benefited due to his endeavours.

Cricket was in the blood of the Rodrigo family. JBC’s brother played cricket for SSC and coached Prince of Wales. JBC’s grandson, Heshan de Silva, captained Royal in 1984/1985 and also played for CCC in the P. Sara Tournament.

JBC retired as principal in 1959. His interest in Prince of Wales’ cricket never wavered. Many a time, when matches were played at the College grounds, he was a keen spectator.

When I captained Prince of Wales’ in 1961/1962, JBC was invited to help the cricketers at practices. Though retired, he willingly obliged. After leaving school, whilst working, I represented Moratuwa Sports Club. JBC used to be present in the evening at the club. It was initially uncomfortable for my friends and myself, to be seen by him, enjoying a glass of the “froth”and a puff, but JBC would invite us to join him for a chat and a game of cards. We were reluctant, but gradually we became comfortable in the great gentleman’s company. Our association with him was very cordial and fruitful, exchanging ideas and cracking jokes over a drink. His company helped us to enhance our knowledge even further.

These are some of my memories of JBC, whom to this date I salute with honour. My earnest prayer for my alma-mater today is, let another JBC-era dawn again.

May the dear Lord grant unto him, eternal rest and peace.