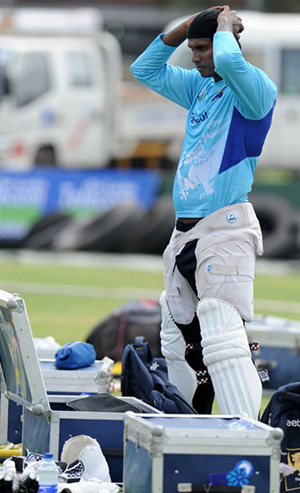 As Sri Lankan cricket enters what is possibly the era of Angelo Mathews, it is disconcerting to note the subtext of race and religion that colours the discussion about his captaincy. One could either pretend it does not exist, or one could actually have a discussion about it in open forums. The latter is the more beneficial option since it allows divergent viewpoints to be aired and amended and forces the participants to develop rational arguments.

Stating the obvious, Mathews is a Tamil and a Christian in a country where the majority are Sinhalese Buddhists. For some of us, this fact plays a prominent part on whether we support or reject his captaincy. The purpose of this article is not to demonise or exalt such inclinations; it is a human reaction that we pull for our own kind whether the kind is defined by race, religion, school, country or caste, but it is to be hoped that we can learn to look more broadly.

If a person claims that they are without prejudices, one would need to check their pulse to determine if they are alive. We have many more miles to travel before the radiant stars of love and brotherhood that Martin Luther King talked about shine over us with their scintillating beauty. Prejudices are an ingrained part of us; it is a somewhat latent but intrinsic part of the nurturing we receive from our families, friends and wider society. However, it is far from being a badge of honour.

Hopefully, we reevaluate such prejudices as we learn more about the wider world, make connections with different groups of people and develop our own moral compasses. It is also certainly not something that is relevant to Sri Lanka alone. Prejudices related to race and religion are alive and well even in countries some of us hasten to name as paragons of virtue in this regard. What primarily differs from country to country to a certain degree is the nature of manifestation of such prejudice, whether it is overt or subtle, in public space or private space, whether mechanisms of discrimination are personal or institutionalised. As a part of societal activities, sport is also touched by the prejudices held by society in general, as recent events with regard to racism in European football and the Tebow drama in the US highlights.

It is curious that all of us were unified in celebrating the arrival of Mathews, the long-awaited fast bowling all-rounder, but have now developed qualms over his prospective captaincy. Sri Lanka has had Christian captains leading the cricket team before and that has not been a significant part of the conversation. We have also had Tamil cricketers before and some of them are amongst the most admired of the lot. There could be some truth to the arguments, that the current whispers are due to a heightened sense of racial and religious identity, or due to the fact that what once was said over a plain tea and a cigarette in a roadside boutique is now out in front of the world due to social media and the internet.

Some have opined that the issue is not his religion or race, but the celebration of that in the middle of the pitch when one makes the sign of the cross. One could make a fair argument that expressions of religious identity does not belong in the secular public space, even though we also need to acknowledge that it is blatantly unfair for that principle to be applied to Mathews alone. If the concern is that he might use his position to promote purely individuals of his own race or proselyte his religion, it is to be noted that he has not given us any indication whatsoever that he is so inclined.

Our individual likes or dislikes should not play a part in constraining the rights of others. For example, one might dislike homosexuality, but that doesn’t give us the right to impinge on the rights of homosexuals. Mathews is a Sri Lankan just as much as any one of us are and that is the only criteria he needs to fulfil to be considered for the post of Sri Lankan captain, apart from his performances and leadership potential. His cricketing resume and potential indicates that he is the most suitable among the current contenders for the post. Our most recent cricket captains have had more established resumes at the time of appointment, but cricket is replete with examples of young cricketers being handed over the reins based on potential more than performance and doing themselves and their country proud. Stephen Fleming, Graeme Smith and Arjuna Ranatunga are examples that come to mind. It is not necessary for all of us to like him, but it is incumbent on all of us as Sri Lankan cricket fans to look beyond any prejudices to support him. And he will surely need that support since the path forward for any young captain is inevitably going to be rocky at times.

There is also a flip side to this coin that needs to be addressed, in that some of us would hasten to point to his exclusion from captaincy as an exemplar of racial or religious discrimination. That would be a faulty assumption and a disservice to the diversity exhibited in our cricket team over the years. It is a common experience that continuous interactions with people of different kinds are a real antidote to prejudicial thought and fortunately it seems to be the case with our cricketers in particular and the cricketing establishment as a whole.

The concerns about Mathews’ injuries, his Test form and workload of being an all-rounder are all valid concerns that need to be evaluated prior to his selection. The notion that we should have different captains for different formats is at the least a point worthy of consideration. His ascent also will have the uncomfortable side effect of solidifying a perception that you need to belong to a certain privileged clique, or be represented by a particular agent, to be successful. Therein lays a critical point: Any discrimination that might take place is more likely to happen based on membership of a club or a clique rather than race and religion. Perhaps it is an ironical sign of progress.