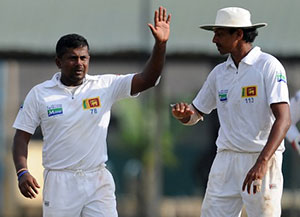 It’s hard to imagine what Sri Lanka were thinking when they chose to field a second-string side for their only practise match ahead of the Test series against Australia.

Were they concerned about exposing Rangana Herath and Nuwan Kulaskeara to the Australians? Surely they realise that the Australians have played both bowlers in the past and video analysis is sufficient exposure? If they had hoped to test out their bench strength, it only revealed the weak links in the squad.

Suraj Randiv, for example, has really not displayed that he has the goods to succeed at Test level, yet he continues to be selected. After Thursday’s performance, the Australians will look to target Randiv, as he is one of only two spinners in the squad.

Ajantha Mendis deserves a prolonged run at Test level against all opposition, but he continues to inexplicably be sidelined, and Randiv is preferred over him. No one knows why. Two years and 12 Test matches since making his debut, Randiv’s Test bowling average is now nearing 40.

Like Randiv, Dhammika Prasad too was hammered for more than 100 runs on day one of their ongoing tour match against the Chairman’s XI, and Prasad’s Test record thus far also suggests that he does not have what it takes to succeed in this format.

While Kulasekara and Herath are Sri Lanka’s two best bowlers in the Test squad, neither of them can do without time in the middle in Australian conditions — they just aren’t that good. Although they have been successful in recent times, both bowlers boast of mediocre Test bowling averages, which makes it all-the-more hard to understand why Sri Lanka would not give them a chance to acclimatise, so they can better their chances of succeeding.

Sri Lanka’s senior batsmen — Mahela Jayawardene, Kumar Sangakkara and Tillakaratne Dilshan — were picked to play, but why Sri Lanka’s bowlers are not afforded the same opportunity is mind boggling.

Graham Ford, Sri Lanka’s South African coach, said that the islanders were "not quite ready for the Australians" before the tour, but on that occasion he was referring to Sri Lanka’s batsmen. It is true that Sri Lanka’s bowlers looked lethal last month against New Zealand, a team ranked just above last-placed Bangladesh in the Test rankings, but they may cop serious punishment against the Aussies.

If the first day’s play is anything to go by, one should now expect the batsmen to exhibit their weaknesses to the opposition on day two.

Apart from this, it is understood that Sri Lankans, like many other teams, need time to acclimatise to conditions in Australia. But the Sri Lankan cricket board continues to fail them. By not working with Cricket Australia to allocate more practise games, our board officials continue hinder the team’s chances of winning a Test in Australia. Other top Test nations ensure their teams play several practise games when touring Australia, not our incompetent lot.