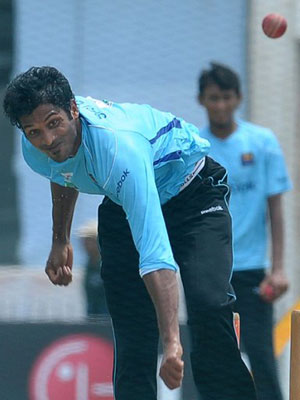 The manner in which Bangladesh’s pacemen Robiul Islam and Abul Hasan bowled to Sri Lankan batsmen in the first hour of play on the second day of the second Test at the R Premadasa Stadium was impressive, as the right-arm pace duo kept it up and constantly asked questions. They put Bangladesh in front with a double strike. Hasan enticed Dimuth Karunaratne (17) to cut a short ball, with the ensuing edge ending up in the wicket-keeper Mushfiqur Rahim’s safe hands. Islam drew Lahiru Thirimanne (0) into an expansive drive, with the edge once again flying safely to Rahim. The double strike not only put Sri Lanka in early trouble (3/43), but it also put the Sri Lankan pacemen’s display in the first hour of play on day one into sharp contrast.

Sri Lanka rightly picked three frontline pacemen in their side — Nuwan Kulasekara, Shaminda Eranga and Suranga Lakmal — and had Angelo Mathews to provide added muscle. The Premadasa wicket uncharacteristically had some grass on it, but if the Sri Lankan pacemen got maximum advantage of the wicket is doubtful. This is highlighted by the fact that it was left-arm spinner Rangana Herath who took a five-wicket haul, and instigated a batting collapse, leaving Bangladesh all out for 240.

Sri Lanka’s fast bowlers did keep it tight, as rightly pointed out by Herath in the evening media briefing, however, the fact that the opposition managed less than 300 in the first innings should not hide the pace bowling inadequacies in the Sri Lankan camp.

The selection of pace bowlers for the Test raised many an eyebrow. All four pacemen picked by the Sri Lankan selectors were right-armers. A closer look at them will reveal that all of them tend to bring the ball back into the right-handed batsmen. Taking the ball away from the batsmen, or bowling outswingers, in the first hour of play is crucial for a fielding team’s success.

On Saturday, Lakmal was wasting deliveries by spraying them way outside of the off stump, whereas he should have come closer to the stumps and bowled wicket-to-wicket. The Bangladeshi batsmen didn’t have much trouble against Kulasekara and Eranga either. They bowled at middle and leg stump, or in other words, at the pads.

Luckily for Sri Lanka, Mohammad Ashraful, who made a huge century at Galle, was run out. Herath snared Rahim, the double-century-maker in the first Test, and Nassir Hossain, another centurion.

What has happened to the left-arm paceman Chanaka Welegedara; why is he not being picked? Welagedera has taken 54 wickets in 20 Test matches. He is the leading left-arm quick in the country, and is also the most experienced Test bowler around. The left-armer’s natural angle takes the ball away from the right-hander, and Welegedara’s ability to bowl outswingers, from over the wicket, is well documented. He is a shrewd operator with the old ball too, as he is one of a handful of bowlers that can extract reverse-swing, a trait which could have stood out in the dead Galle track, where the Bangladeshi batsmen scored in excess of 600 runs.

In the recent past, Welegedara has proven to be the perfect ally for Herath, and the duo have combined to form a deadly pace-spin combination. He is in good rhythm too, having picked up 18 wickets in five matches for his club Tamil Union in the ongoing domestic league tournament. In the last Test series in Australia he captured six wickets, when the bowlers who made the team for the ongoing Test series toiled without much success. So, what’s holding Welegedara back?

Sri Lanka’s new bowling coach Chaminda Vaas, who is said to be paid over Rs. 600, 000 per month, may be able to answer that question. The cricket fraternity rejoiced when Vaas and Muttiah Muralitharan were appointed as pace and spin bowling coaches, as was the case when Sanath Jayasuriya and Hashan Tillakaratne came in as selectors, but cricket fans never bargained for the killing of talent under their noses.