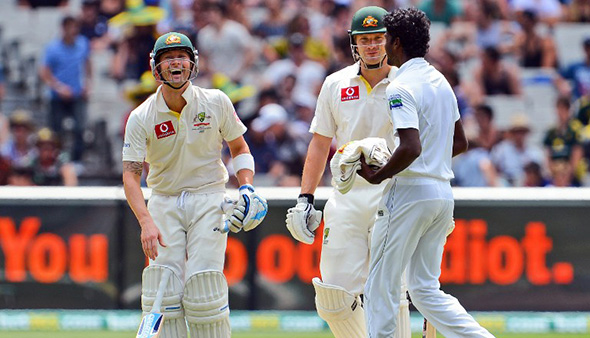 Australia finished day two well on top thanks to a century from captain Michael Clarke. © AFP

The compulsive fool that I am, I woke up early this morning to watch the second day’s play in the second Test between Australia and Sri Lanka at the MCG. In case you missed it, Australia are 440/8 in reply to Sri Lanka’s first innings score of 156.

It’s looking a lot like an innings win for Australia at this point because Sri Lanka are down to three bowlers, with Chanaka Welegedara pulling a hamstring. Prasanna Jayawardene too is unable to bat or keep wickets thanks to a broken thumb, which means that Sri Lanka have lost a stubbornly resistant batsman as well.

A text message from a friend in the US this morning read: “We are basically cricketing minnows who played out of our skins for a decade, with a group of once-in-a-generation players.

“I shudder to think how we will fare after Mahela and Sanga retire.”

I couldn’t agree more. My mate has never been the average cricket fan. He has a PhD in Mathematics and Finance, and is therefore able to analyse more rationally than most.

Are Sri Lanka cricketing minnows? The evidence, if looked at dispassionately, would definitely seem to suggest that.

Sanath Jayasuriya, Romesh Kaluwitharana, Aravinda de Silva, Arjuna Ranatunga, Muttiah Muralitharan and Chaminda Vaas were much, much better than the personnel we have now; for sheer match winning ability, nous, experience, ability and brashness they were unparalleled. Perhaps just for one tournament Mahela Jayawardena’s 2007 World Cup team may have come close being as good as any Sri Lankan team of the mid-to-late 90s.

Jayawardena — as good as he is — has never been as destructively brilliant as de Silva was at the tail end of his career, when he realised he needed to back up years of potential with runs. And despite their acclaim across the cricketing world, neither Jayawardena nor Kumar Sangakkara have captained Sri Lanka with as much impact and tangible results as Ranatunga did. Muralitharan and Vaas are incomparable, and have not yet been replaced, while Jayasuriya was a single-handed match winner. Sri Lanka have none of their like anymore.

Mathew Wade’s catch in Sri Lanka’s first innings, where he ran back nearly 30 metres towards the boundary line from the wicket-keeper’s position to take a diving catch, defines the disparity between Australia and Sri Lanka. Wade’s commitment, athleticism and technical perfection in the execution of what was a very difficult catch, even though his side was already well in control of the Test match, was not only a lesson in dedication, but also an eye-opener for the visitors.

In contrast to Australia’s dedication and professionalism, we are hearing from the Sri Lankan spectators who were present in Hobart that Angelo Mathews — the captain in waiting — was taking photographs with the crowd moments before he grassed a chance from Mike Hussey and helped it to the boundary line.

The contrast is Starc indeed.

That Australia can choose to rest one of their best quicks Mitchell Starc, despite injuries to another two stars, tells us that they ooze confidence and believe in the ability of their full squad. Their replacements almost always deliver — Mitchell Johnson shone with both bat and ball in his very first game of the series. Sri Lanka doesn’t possess that ability.

New Zealand at home and Australia in Hobart and now Melbourne have exposed our failings for the world to see. Sangakkara has articulated in no uncertain terms that Test cricket is the most important form of cricket, and how Sri Lanka should be playing more of it. Agreed. But, if he wants to be taken seriously, he needs to stop kicking healthy edges away from first slip.

It’s time for both Jayawardena and Sangakkara to back up the critical acclaim that they bask in. In fact, for countries like Sri Lanka, the noisy upstarts of cricket, having their leaders liked and pandered to by the rest of the cricketing world is actually counter-productive. Nobody liked Ranatunga. Why? Because he beat them. He didn’t mouth platitudes to them in a familiar accent; Ranatunga got under the skin of Australia. Shane Warne hated him. Ian Healy sledged him, yet he still walked those singles.

The jingoists will point to the fact that Sri Lanka have made the finals of assorted ICC tournaments, including World Cups, but to what effect or greater good? It would be foolish to say that Sri Lanka were the second-best team in all those tournaments, but foolishness does seem to hold sway in this country.

When I may have opined after the T20 World Cup final in October, that Sri Lanka deserved the abject thrashing at the hands of the West Indies due to our lack of preparation, I was shouted down by the patriots, which makes it hard for me to not write an ‘I told you so’ column on the eve of the thrashing that we are about to receive in Melbourne.

Sri Lanka need to start winning. And if two players in the 10,000-run club, touted by some as the best things since sliced bread, one of them the Test player of the year to boot, cannot last 44 overs in the first innings of a Test match, the first thing to do is to acknowledge the problem. We must also acknowledge that some of these accolades have been far too easily and too inaccurately handed out.

Sri Lanka’s wins have been inconsistent, flukish almost. That is not the sign of a good cricketing side, and preparation is the key to consistency.

Peter Siddle, Jackson Bird, Nathan Lyon and Johnson are not the equivalent of Glenn McGrath, Brett Lee, Shaun Tait, Jason Gillespie or Warne. Nevertheless, Australia’s new stars are still routing Sri Lanka with the same ease their former greats did. Why is it that Australia seldom seem to drop their form, or go through a drastic transitional phase?

With James Pattinson and Pat Cummins not in the side, this isn’t even the best Test side available in Australia at the moment. Yet, Sri Lanka are unable to compete. Let me be clear: I am not expecting a 3–0 routing of Australia in Australia. If I was, I would be as myopic as the very cricketing machine I condemn. I will be content with a 3–0 loss to the Australians, but only if Sri Lanka show resolve and fight.

Getting out to good deliveries, taking your catches and showing discipline in bowling is not a lot to ask of them. Sri Lanka must strive to remain competitive by making best use of the resources at their disposal, and getting the basics right is one way to accomplish that. If Sri Lanka cannot rise up to the occasion of a Boxing Day Test, what can they gee themselves up for? Having watched very little cricket this entire year, even I dragged myself out of bed for this Test match out of excitement.

Sri Lanka must go back to the drawing board. Sixteen years is too long to ride on the coattails of Ranatunga’s merry band. Have Sri Lanka lived up to their potential, did they build on their sole World Cup win? No, not by a long shot.

Before we hail Jayawardena and Sangakkara as the Messiah’s of Sri Lankan cricket, we need to ask if they have contributed enough. And in ‘enough’, I mean more than the sound bytes and the suaveness. They have been fantastic ambassadors for Sri Lanka, but nice guys mostly finish last.

If the two big boys can save this game for Sri Lanka, I will be ecstatic.

Just as a draw in Hobart would have been as good as a win, the same can be said about this Boxing Day Test, but it is unlikely.

And as Sri Lanka’s coach Graham Ford suggests, chasing stars is not going to bring us any joy. Even the Magi went in search of the star, and didn’t wait for it to drop out of the sky. Perhaps that is why they were wise men. According to Ford, Sri Lanka needs to find their next star to replace Jayawardena and Sangakkara. They don’t grow on trees, mate. Until such time, he’d do well to teach Dhammika Prasad how to direct his bouncer and Shaminda Eranga how to bowl two balls on the same spot consecutively. Everyone in the Sri Lankan camp these days appear to be missing the wood for the trees.