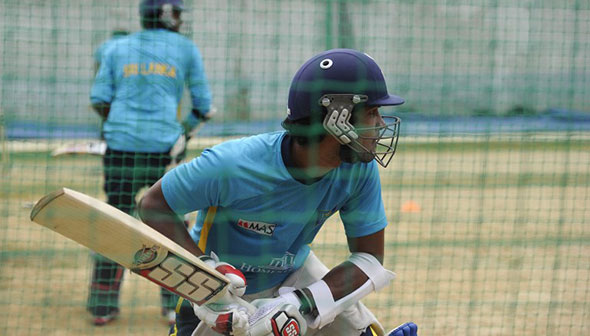 Sri Lanka’s upcoming players have been a huge disappointment. © AFP

The utter incompetence of the Sri Lankan team is no longer worth wasting a lot of time on. Don’t get me wrong: I’m not, and never have been, a fairweather fan, but when the guys playing the sport look like they don’t give a hoot, then why should I? I think it’s daft to allow individuals who only care about their place in the side, or how much money they’re going to make based on performance, dictate my sense of self worth or the identity of my country.

Yes, Sri Lanka beat a depleted South African team in the ODIs (and lost the T20 series), but, honestly, none of those performances provide any hope for 2015. Kumar Sangakkara was in the form of his career, and I don’t think he has ever batted this well before. He is batting with intent, dominating attacks, and finally (and I say ‘finally’ deliberately) is deserving of the accolades that have been heaped upon him. Imagine what his resume would have looked like had he batted with such domineering brilliance for the early part of his career, but his batting and very little else, apart from Tillakaratne Dilshan’s batting, won us that series.

The youngsters who were given opportunities didn’t fire, and despite the fact that Angelo Mathews, Dinesh Chandimal, Angelo Perera etc., are all failing regularly, poor Jehan Mubarak is the familiar scapegoat. The team is too full of top-order batsmen. For years, we have played our best batsman — Mahela Jayawardena — in the middle in order to plug the vast blackhole of incompetence in that area. There is no doubt that his 16-year career would have been far more distinguished if he hadn’t had to clean out the Aegean stables left by a flailing top order and floundering lower order.

It is unfortunate that for so long we have struggled to address the requirements of our team and squad. And it is also unfortunate that a young, newly-appointed upstart feels the sense of entitlement to berate the ‘youngsters’, of whom he is one, and criticise the selectors for resting one senior at a time. What would he like? Resting them altogether? Or not at all? The short-sightedness of the young lad’s thinking, coupled with Angelo Mathews’ patent lack of a clue, seems to suggest the Renaissance is now over as far as Sri Lankan cricket is concerned. Da Vinci and Michaelangelo are well on their way to retirement in their padded cells, and their seem to be no heirs apparent.

The sad thing is that nobody seems to care. We have some paunchy 20somethings donning the national kit and going through the motions. It’s upsetting. The passion of playing for your country went out with professionalism coming in, but at least the players can look like they’re trying. The interest in Sri Lankan cricket has waned, and that’s not just from the spectators, but the national cricketers themselves. The administration rarely had any interest in it to begin with.

So, I will watch the All Blacks, happily, knowing that as much as they may have devastated me for 16 years, they will always try; and they will always cherish that Black jersey and all it stands for. It doesn’t matter if they lose, or if they suck for a game or two once in a while because they’re good blokes, or they at least do a damn good job of pretending they are.