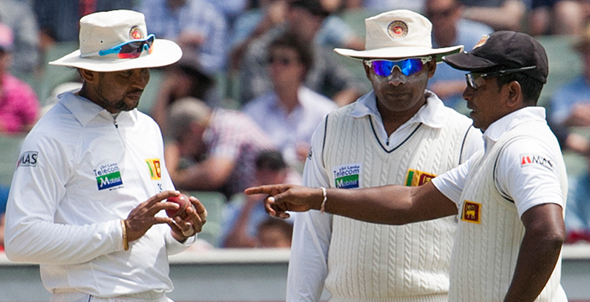 By Damith Samarakoon reporting from the SCG | January 5, 2013

Sri Lanka have never won a Test in Australia, and at the close of day two in the third Test at the SCG their latest opportunity, while not being completely out of their grasp, got a little further away. What was most disappointing though, was that their slow demise was largely of their own doing. Australia did bat well in patches, but Sri Lanka did not really make them work hard enough to gain the advantage they possessed.

The tourists ended the first day poorly after having kept Australia at bay for most of the day. While 294 wasn’t a bad total, it was 50–80 runs short of the par score on this wicket. With an already hampered bowling attack due to injuries, Sri Lanka had been forced to field a second-string pace attack with bowling averages that read similar to Don Bradman’s various batting averages. So it fell to Mahela Jayawardene to play a crucial role in the way he managed his attack.

Sri Lanka’s struggles could have been prophesized early, given the omission of a key player who has largely gone unnoticed. Perhaps it was the greenish tinge the SCG pitch displayed before the first day that tricked Sri Lanka into not picking two spinners, but as curator Tom Parker had said, the pitch had not been watered for two days prior to the opening day, and had dried up considerably by the start of the Test. And with the bit of turn that Nathan Lyon got in his first couple of overs prior to lunch on the first day, and what Rangana Herath manage to extract on day two, it is evident that Sri Lanka have lost the advantage they would have had if they played Suraj Randiv alongside Herath.

Batting last on this pitch will be tricky if not torrid — deliveries already have kept low from the fast bowlers, as well as the spinners. And the chance to come hard at Australia’s extended tail with a quality off-spinner, especially considering that there is only one right-hander in the top seven of Australia’s line up — against whom Herath is less effective — was lost before even a ball was bowled.

Jayawardene is widely regarded as one of the best tacticians and thinkers leading a side in modern cricket. Sadly though, based on the evidence of his man-management on this tour, and in fact across his second stint at the helm — particularly in the Test arena — he seems to have gradually detached himself from his naturally instinctive style of leadership, which made him a sharp reader of match situations and earned him recognition.

In Herath, Sri Lanka and Jayawardene possessed the leading Test wicket taker in the world in 2012, and arguably the best spinner in the world currently, therefore, it made little sense that he was not given an over before lunch, or that Australia were allowed to rack up 125 runs before Herath was given the ball. Instead, Jayawardene mysteriously opted for the part-time off spin of Tillakaratne Dilshan.

“I had a little chat with Mahela. It was a quite a tough call. He felt that with the left-handers at the crease, he would go for the off-spin option,” Ford said.

“We were in fact close to going with the double-spin option in that session, but in the end we decided not to.”

The choice of Dilshan may have been understandable, given that he was taking the ball away from Australia’s left-handers, but to keep your best bowler away from the attack, when Australia were getting away quickly and Sri Lanka needed wickets, was still a poor decision. What perhaps made the decision a howler was the fact that Herath, in only his second ball, was able to launch Sri Lanka’s first genuine appeal for a wicket.

Having belatedly brought in his main wicket-taker into the attack, Jayawardene proceeded to provide him with fields that offered no real challenges to the batsmen. With men deep on the point boundary, as well as on the leg side, even the good balls from Herath were leaking runs. Jayawardene’s field did not permit him to settle into a rhythm by bowling to one particular batsman. Oddly, Herath did not seem to mind this tactic either. Both bowler and captain were happy to allow the Australians the chance to grow in stature and confidence as they built their innings.

Ford indicated that this was an attempt to stem the flood of runs in the first session.

“We were in a situation where we needed to get some control back,” he said.

“Australia were ahead at that stage, and Mahela was looking at protecting the runs, as well as picking up wickets.”

That might be true, however, there’s no better way to stem the flow of runs than to take wickets, while making run-scoring difficult with fields that do not allow opposition batsmen to get off strike with easy singles. Jayawardene’s preoccupation with curtailing the damage, as opposed to being the aggressor, resulted in Sri Lanka never truly being the dictator of the game.

And that underlined a large part of the problem on day two — Sri Lanka and Jayawardene were happy to let the game meander along by being satisfied with ineffectiveness.

Sri Lanka were never truly on top, and several factors contributed to this: a seam attack south of being Test match potent, a good spinner bowling to poor fields and missed chances. Jayawardene did not appear to make any attempt to push Australia when he could have, which may prove to be costly for him in his final Test in this country. He did show some willingness to attack when a wicket fell, which unfortunately was often short-lived. When a partnership threatened, Jayawardene was happy to let the game unfurl without being the instigator of its next phase. This cost Sri Lanka, and squashed the slim opportunity to possibly bowl Australia out and keep them on par with Sri Lanka’s first innings total.

At the end of the day, despite the unwillingness to keep the game moving in a positive direction for them, Sri Lanka were still able to account for six wickets. It would be cruel to say Sri Lanka bowled poorly, for the bowlers that were on display were Sri Lanka’s last Rembrandts of decent quality.

Nuwan Pradeep bowled accurately, and with one wicket halved his Test bowling average. His performance was good enough to suggest that there may be something Sri Lanka could harvest from him if he remains fit. Dhammika Prasad and Suranga Lakmal were steady, but Herath was once again the pick of the bowlers, and had couple of chances at short-leg been taken, Sri Lanka would have ended the day in the ascendancy.

There is still a slim chance for Sri Lanka to pull off a win, but if consistent success at the Test level is what they strive for, they must be prepared to take charge of a game and create wicket-taking opportunities.

They have stayed in this game through honest, hard work and some indiscretions from Australia. However, this safety-first mentality and culture that has taken root within the team currently is only holding them back from achieving their true potential. If Sri Lanka are to chase that first Test win in Australia, it is not only a strong Australian side that they must overcome, but also their own inhibitions and apprehensions.