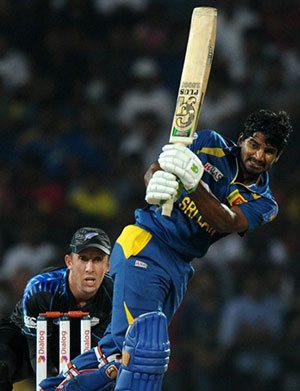 In the days and months after every World Cup campaign, it’s customary to hear Sri Lankan selectors talking about building for the future, promising to infuse youth into the side in preparation for the next tournament four years down the line.

As the ICC’s main showpiece event nears though, the selectors do an about turn because they find themselves ill-prepared. They begin harping on the need for experienced players in the side, claiming that experience is what counts in big tournaments such as a World Cup. The inclusion of previously discarded players, who haven’t featured in the side for months, find themselves recalled.

With the next World Cup in Australia and New Zealand looming, will we see the Sri Lankan selectors turning to the likes of Chamara Kapugedera, Jehan Mubarak and Farveez Maharoof, instead of the recent additions in the side? Will we see Kusal Perera or Dimuth Karunaratne partnering Tillakaratne Dilshan to open the batting, or will Mahela Jayawardene be the preferred choice, leaving Sri Lanka’s batting line-up top-heavy with Dilshan, Jayawardene and Kumar Sangakkara taking up the top three positions?

Sri Lanka have chopped and changed so much so, that Dilshan has opened with Upul Tharanga, Mahela Jayawardene and Kusal Perera in recent times. Picture yourself in Perera’s shoes; a young opener trying to find his way in the international game, but is often under unnecessary pressure to perform more consistently than the regulars in the side to secure his place.

The newcomers in the side need support by way of continuity, and they will need many games under their belts before February 2015 if Sri Lanka hopes to impress in tough conditions in Australia and New Zealand.

Going by what we’ve seen in the past, don’t be surprised if the hugely impressive Perera falls out of favour rapidly come 2015, and the immensely talented Tharanga, who now finds himself discarded and captaining the A side, back in the Sri Lankan line-up. Don’t rule out Kapugedera’s return in favour of that unsung hero Lahiru Thirimanne.

Sri Lanka’s selection panel must finalise their batting line-up now for the next World Cup, which is just 14 months away. They must focus on providing the youngsters a permanent position in the ODI batting order.

The time has also come for Jayawardene to decide where he wants to bat, and perhaps give up ambitions of opening in ODIs, to allow Perera to continue batting at the top with Dilshan.

If the selectors believe they need the services of experienced players for the next World Cup, then they must bring in those discarded seniors now, and allow them the opportunity to gain in confidence and strike form.