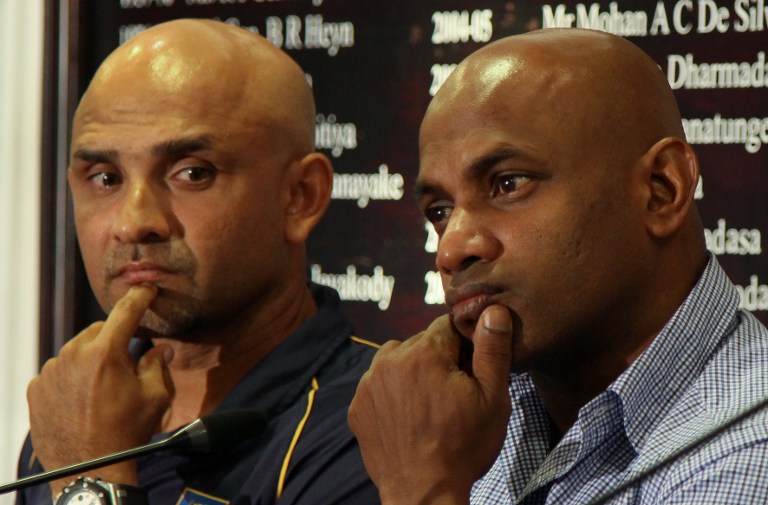 The finalists of the previous two World Cups could not go beyond the quarter-finals this time. © AFP PHOTO

Let's for a moment forget the four years Sri Lanka had at their disposal to build a 15-man squad for this World Cup, and let's focus on the seven ODIs they played against New Zealand just prior to the mega event: even with their limited bowling resources, they had ample opportunity to study New Zealand's strengths and weaknesses and prepare for their World Cup opening match.

They lost that match and appeared to have retained very little from their series loss to New Zealand. And as the World Cup continued, their selection policy saw numerous changes to the side — they chopped and changed all the way to that disastrous quarter-final against South Africa.

After squandering the opportunity to field a settled side in the tournament, the chairman of selectors Sanath Jayasuriya is trying to pass the buck for Sri Lanka's World Cup exit by making excuses for the poor showing with reasoning as nonsensical as his panel's selections.

Jayasuriya told reporters in Colombo recently that fitness was the main problem, and they will "take hard decisions about players who don't meet the new standards" that they hope to set.

Take a step back. Look at how England fared in the tournament after axing their regular skipper Alastair Cook weeks before the tournament. And then note how South Africa persisted with Quinton de Kock despite repeated failures. We saw the same with Aaron Finch and Australia. Both players repaid the faith the selectors and the team had placed in them with crucial knocks.

Teams who did not make drastic changes to their ODI sides, and sides that backed players through lean periods, knowing that these players are skilled enough to come good, have excelled.

Sri Lanka trialled numerous opening combinations. They even experimented in the all-important quarter-final by pushing Lahiru Thirimanne, who had done well in the tournament as an opener after Dimuth Karunaratne's repeated failures, down the order to give Kusal Perera yet another opportunity.

Perera's decision to emulate the chief selector's batting style seems to be paying off for him, but not with runs off his bat though. If Perera was good enough to open batting in a World Cup quarter-final, then why was he not good enough to be in the World Cup squad to begin with? Perera had only recently arrived in Australia as an injury replacement and had played just one match, and that too batting in the middle order, before being thrust up the order in a game of paramount importance.

Oh, and there's this: ever since the government changed hands, Ramith Rambukwella can no longer even make a Sri Lanka A preliminary squad. Previously, the former minister's son was a part of more than one preliminary Sri Lanka World Cup squad, and he even made his debut for Sri Lanka in T20s under this selection panel's watch. Politically motivated selections are enough of a reason to show these selectors the door.

The finalists of the previous two World Cups could not go beyond the quarter-finals this time. Heads must roll. The selectors have nothing but growing expenses and harebrained selections to show for, and the entire panel must be dissolved if they are unwilling to resign. The head coach Marvan Atapattu and bowling coach Chaminda Vaas too are responsible for fielding what appeared to be a side without a strategy. Their time too must surely be up?

We may also see change in the SLC administration. There is talk that the April 30 SLC elections could be postponed and an interim-committee could be appointed. I'm no fan of government interference in sport, but if it will help oust those who oversaw millions in losses for the board, then I can live with flip-flopping on this principle.

There can be no progress if things remain the same. Jayasuriya is right — hard decision must be made.