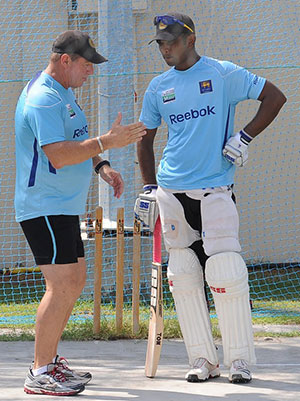 The shameful and unprofessional manner in which Geoff Marsh was ejected as coach of Sri Lanka is likely to deter any exceptional overseas coaches from working with SLC. Who but the desperate would want to pursue employment with an employer that is struggling financially and offers no job security?

SLC recently revealed that it had settled out of court with Marsh for $100,000 for terminating his contract. Another costly blunder by those at SLC.

Sri Lanka’s current coach Graham Ford has stated that he is unwilling to extend his contract. Ford has accepted Surrey’s offer to coach their side, which has SLC scrambling in search of a suitable replacement, but a very few seem interested.

"The applications called for last month attracted only a measly figure of 11, of which three were from local coaches," reported The Nation. "From among those who applied from abroad, there were hardly any reputed coaches who wanted to be employed at SLC."

Marsh, whose credentials as a player and coach are far superior to Ford’s, was removed just a few months into his new job. Just prior to his sacking, state-owned media outlets made nonsensical allegations against him to portray him in negative light. They claimed Marsh was more interested in watching his son playing for Australia on a laptop, instead of focusing on a Test match that was unfolding in front of him.

Marsh would argue that he has no trouble multi-tasking.

SLC officials have been brandishing many names as possible successors to Ford. The most high-profile of them all was Greg Chappell, but Chappell reportedly turned down the offer, and The Island reported that throwing Chappell’s name into the mix was just a "ploy" by SLC officials to "buy time" because "fans were growing impatient."

A number of Sri Lankan media outlets and former players have been critical of Marsh’s removal.

"It is an episode to forget," wrote Russel Arnold in his column on Island Cricket last year. "There was not enough time for him to make an impact, especially when you consider where Sri Lanka was at that stage. They were in a rebuilding phase and were also on tour. You should never bring about major changes when the team is on the road. Marsh needed more time to deliver results. There was never a period of two or three weeks at home for Marsh and the team to totally focus on skills."

Mahindananda Aluthgamage, the island’s sports minister, too holds blame for Marsh’s unceremonious sacking, as he was on a crusade against Marsh at the time. The sports minister, a son of a late politician, who only possesses a secondary-school education and has no qualifications in coaching or cricket, even gave Marsh a lecture prior to the team’s departure for a tour of South Africa in 2011.

SLC breached the contract it had signed with Marsh based on poor reasoning, and carelessly wasted millions of rupees as a result. The reputation of the board too has suffered. It is more evidence of how the political appointees at the board are hugely detrimental to SLC, and also how politicians continue to interfere in SLC affairs. The firing of the team coach appears to have been made based on unintelligent allegations and ill-conceived suggestions from ex-players and politicians, not sound reasoning, research or facts.

How Marsh was removed sends a clear message to the rest of the world: there is no stability in working for SLC — it is a volatile organisation. Why this is damaging is because any good overseas coach will not take on such a risk, which means that World Cup finalists Sri Lanka will be left with those who are not the best in the business to coach them. SLC’s financial crisis is also another red flag that should prevent the best coaches from applying.