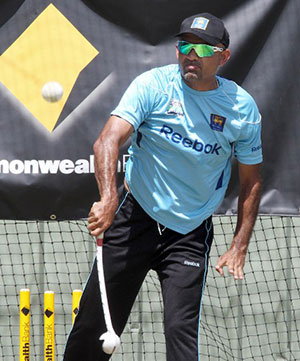 Atapattu has been with the team since June 2011. The 42-year-old first functioned as the batting coach and later as the assistant coach. He was an understudy to Trevor Bayliss and Graham Ford, and has a thorough knowledge on how the game is played and run in Sri Lanka.

Players, young players especially, would feel comfortable to approach Atapattu, as they wouldn’t have to worry about a language barrier.

However, another school of thought is that it’s premature for Atapattu to function as the head coach, as some of the players with whom he shared the dressing room as a player are still around.

Atapattu’s much publicized "a set of muppets headed by a joker" tirade against the selectors, who looked to drop him from the team and replace him with Mahela Jayawardena as captain, is still fresh in some minds.

Some argue that Sri Lanka have been very successful with foreign coaches since winning the World Cup in 1996 under Dav Whatmore,so the trend should continue.

The overseas coaches who have served Sri Lanka were not big names as players, but as coaches, they had some credentials, and after some years, they walked away with a price on their heads. Has Atapattu proven himself enough as a top coach?

When Chandika Hathurusingha was the shadow coach of the team some time back, there were many instances where players came out in public, and acknowledged the contribution Hathurusingha had made to their individual game. Players even spoke of how Hathurusingha helped them resurrect their careers, while others said he improved their batting, having worked on their weaknesses.

It has also been reported that it was Hathurusingha who suggested Muttiah Muralitharan should come round the wicket, and it was at a time when Muralitharan was increasingly becoming predictable with his doosra. The wickets once again started to come in buckets loads for the spinner.

A coach may not require appreciation or accolades, but when they come from the heart of the players, it certainly does prove that he is on the right path, and doing a successful job.

If a captain is as good as his players, a coach must be as good as the players he coaches.

What about the present crop of Sri Lankan batsmen? The team still relies on the three seniors — Jayawardene, Kumar Sangakkara and Tillakaratne Dilshan — to score big all the time and win matches. Youngsters in the team have failed to come up with good, consistent performances with the bat. Sri Lanka is still struggling to field a pair of solid opening batsmen. Therefore, doubts are cast if young batsmen coming into the team have been harnessed properly.

There are some examples. Dinesh Chandimal, even after playing 69 ODIs, is struggling to find his feet. Kusal Perera, who is an ideal batsman for the shorter formats of the game, has lost his place in the team. Dilshan Munaweera’s entry as a hard-hitting opener for the T20 World Cup was sudden, and so was his exit. At 26, Chamara Kapugedera’s ability to use the long handle is wasted in domestic tournaments in Bangladesh. Upul Tharanga, 28, is in the wilderness even after hitting 13 ODI centuries.

It’s not fair to compare players, but one cannot ignore the fact that India’s sensational batsman Virat Kohli, 25, played in the same U19 World Cup, that Chandimal, Perera, Munaweera and Lahiru Thirimanne played in. It’s amazing to see how India has managed to resurrect the career of a player like Rohit Sharma, 26, as a free flowing batsman. Let’s not forget Shikhar Dhawan, 27, and Cheteshwar Pujara, 25. Who needs Sachin Tendulkar, Gautam Gambhir or Virender Sehwag?

With proper guidance and the right encouragement, Sri Lanka’s young batsmen could have been transformed into top performers and real match winners. Atapattu would agree.