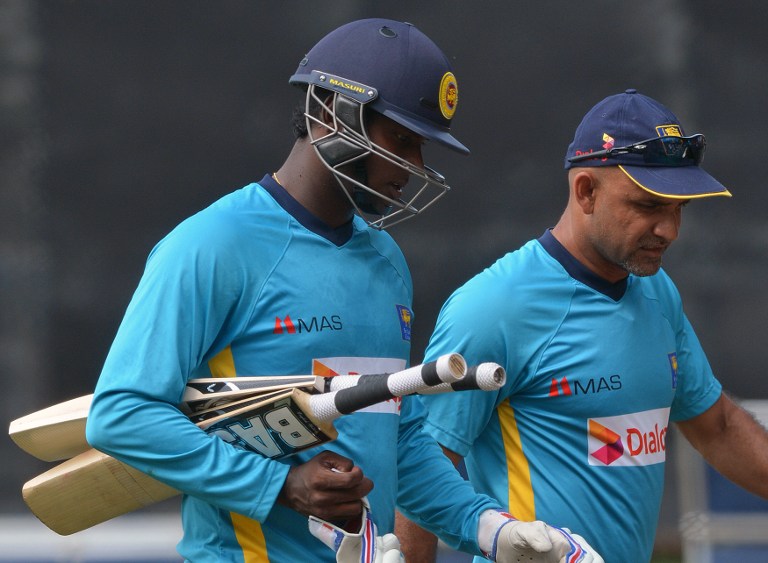 New head coach Marvan Atapattu has his plate full ahead of the 2015 World Cup. © AFP

The ODI series in India is now done and dusted, and the results were as expected. But it appears that a lot of people expect professional sportsmen to be able to turn up on short notice and be at the top of their game. And while this may be true of your average weekend badminton player, it is certainly not true of those who take their preparation seriously. With that in mind, I was expecting little from this series. And you should have done the same.

Regardless of what fans think though, it is reasonable to expect the media to react with some perspective, and also some balance. So when I saw the back-page headline 'RIP Sri Lanka Cricket' today, I really was incensed. How insensitive is it, when your captain scores his maiden and brilliant ODI century, to have a picture of him arms aloft with the headline: RIP Sri Lanka Cricket?

I do not understand how sports journalism lacks any sense of analysis or understanding in this part of the world. At least India's 'experts' are a little more articulate, although their press is just as myopic and jingoistic.

Now that the series is over, there are a few things that need addressing. Obviously. These are what I think they are, in no particular order:

Sri Lanka's fielding is, and has been for a while, a massive problem. With a number of wicketkeeper-batsmen in the side, it's not surprising then that Sri Lanka's best fielder is nearly 40 years old. Tillakaratne Dilshan, despite being the best out of a bad lot, is also past the days where he could terrify batsmen standing at point. The dropped catches which dogged the series, and the impotence of the in-fielders to put pressure on new batsmen, was obvious.

While Ruwan Kalpage was around the fielders were not fit. There's very little any fielding coach can do with players who are not agile and quick. Now that Kalpage has gone, the team is working on the fitness — ironic. But hey, that's Sri Lanka. And poor Kalpage bore the brunt of the blame. Let's see how he does with Bangladesh.

Drops like the high profile ones from Kumar Sangakkara and Thisara Perera, who dropped Rohit on four, can easily be eliminated with a little more practice. Trevor Penney is a guy who can fix that, and hopefully he will.

Sri Lanka tried three combinations in five matches against India: Upul Tharanga got a game, as did Niroshan Dickwella, and the rest of the games were given to Kusal Perera. Tharanga is not in form and looked very much like he was playing for his place. Kusal Perera, coming back from an injury, got some good balls from an Indian attack that was bowling very well. Dickwella, well what can you say after one game?

It is pretty clear that despite Dilshan's unpredictability with the bat, he will open at the World Cup. I say unpredictability because he's not scoring winning runs anymore. Previously, Dilshan used to bat with authority and urgency. Right now he seems content to knock it about and survive, while playing quite a few dot balls. If that is the game he is going to play, we need someone at the other end to up the rate. If Mahela Jayawardene doesn't do it, then they may have to look at another option on the bouncier surfaces in Australia.

If the likes of Chamara Kapugedera and Jehan Mubarak had been given as much opportunity as Chandimal has, then I think they would have come good. In a six-year period, Kapugedera played 92 ODIs. In a staggering 11-year period, Mubarak has played only 40 ODIs. Chandimal, the Golden Boy, has already played 87 ODIs in under four years.

Given that the two former players were middle-order batsmen, who usually have to slug it out as soon as they come to the middle, and Chandimal has got plenty of opportunities regularly at No. 3 and 4, it does appear to be a double standard when it comes to selection. Mubarak was far and away the leading run-scorer in domestic cricket this year and Kapugedera has smashed a couple of hundreds already in Bangladesh in the Dhaka League; and while the competition may not be up there compared to international cricket, it is important to have players who know what's required in the middle-order. It is a difficult game to play, and there needs to be some consistency. Whether Ashan Priyanjan has done enough to validate continued selection, especially for the World Cup in Australia (he hasn't toured there before), is also a question.

Thisara Perera was ineffective in India. He is still suffering from a hamstring injury and that could be partly the reason. However, he does need to be in the side. There's little or no question about that.

The other issue though is spin. It's great if Sachithra Senanayake returns, but if he doesn't, Jeevan Mendis has done exceptionally well both in the Caribbean Premier League and in Bangladesh's Dhaka League this season. The former Thomian captain continues to improve his game, and playing alongside top players from other countries in foreign leagues has helped him. Is he a better option with the bat than Seekkuge Prasanna? Almost certainly. And with the ball the answer is yes, again. He is also a brilliant fielder. Food for thought for the chairman of selectors Sanath Jayasuriya.

It was widely circulated that the Sri Lankans were in the middle of a fitness camp when the series was thrust upon them. It is difficult to assess therefore, why there was so much lethargy on the field. I can understand if it was in the first game, but it was right through the series. The players, if they're coming off fitness, had enough time since the series was announced to taper off and get fresh and work on things like agility. That doesn't seem to have happened. The players looked tired and drained against India. That's not a good combination. So the question, of whether the fitness we are doing is addressing the problems that existed, is another question that needs to be asked urgently.

Is this Sri Lankan team going to win the World Cup if it's played tomorrow? Absolutely not. Can it win the World Cup on schedule? Perhaps, but only if these and other issues are dealt with smartly. The biggest problems seem to be on the plates of Jayasuriya and the new head coach Marvan Atapattu.

Shanaka Amarasinghe is a lawyer by profession and the host of the sports talkshow The Score on the Sri Lankan radio station YES FM.