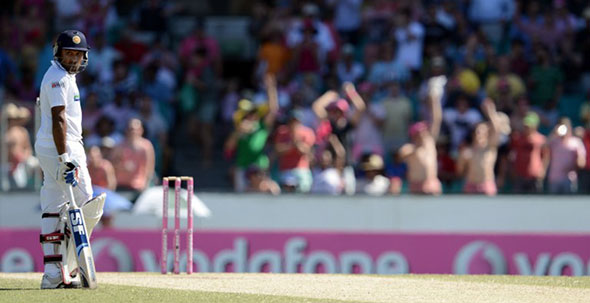 By Damith Samarakoon reporting from the SCG | January 5, 2013

Although the reference might be slightly cryptic, Sri Lanka’s flash forward towards their demise was reminiscent of that old aviator’s proverb. They lost control in the morning session, regained it in the second and then dove head-first into a tail spin in the third, which left their chances of achieving something significant from the New Year’s Test and this tour in tatters.

As the SCG turned pink in support of the McGrath Foundation, Sri Lanka turned from a hopeful hue at the start of play to a bright red of embarrassment at the end of it. The third day began with Australia only 48 runs ahead and with only four wickets in hand, therefore, the first hour was always going to be decisive. Sri Lanka had to dismiss Australia’s tail swiftly to ensure the lead did not get past 100 too rapidly.

What resulted was 90 runs at five-an-over. Most of those runs were off Mathew Wade’s blade, and the Australian wicket-keeper demolished Sri Lanka’s depleted pace attack on his way to his second Test century. When Michael Clarke declared, with half-an-hour left for lunch and with Australia 138 ahead, any chance Sri Lanka had of winning seemed all but squandered.

The tourists needed an excellent second session to ensure that they did not gift Australia a 3-0 whitewash. And the defiance and resistance came on the back of a stoic stand of 108 between Mahela Jayawardene and young Dimuth Karunaratne. The Sri Lankan captain, clearly buoyant from his first innings effort, looked more assured than he has been at any point on this tour, while Karunaratne batted with confidence and adventure, and eventually going on to register his second Test 50 in trying circumstances.

But as in the morning session, when Sri Lanka were in a position to get back into the game to push on their advantage, they rehashed their bad habits. This inability to capitalise has haunted them throughout this tour.

In Hobart, Sri Lanka revived themselves from being at 87/4 to 248 with no further losses in the first innings. At that stage, Sri Lanka were well placed to close the first innings gap between the sides, but they only managed to lose their last six wickets for 88. In the same game, when faced with a good opportunity to draw the Test on the final day, after being 65/2 at close on day four, Sri Lanka capitulated, although batting had become much tougher by then on that surface. In Melbourne, where 39 out of 76 times the team batting first had won the game, Sri Lanka won the toss and got the chance bat first. They keeled over for 156 all out on day one and lost inside three days. In this Test in Sydney, faced with having to recover from the shame of the Boxing Day Test, they had moved steadily to 222-4 on day one before another collapse saw them lose their last seven batsmen for 72.

Test matches are an unforgiving beast and can be deceptive in its length. While the five days provides teams with the opportunity to comeback into the game from poor starts, to lose your focus for an hour could mean flirting with danger. To lose an entire session badly could potentially be what could cost teams the entire game, and this has been the overriding arc in Sri Lanka’s storyline on this tour.

A heavy portion of the blame at the end of the third day in Sydney goes to Thilan Samaraweera for his abysmal shot selection against Nathan Lyon, when he was yet to get off the mark. Having charged down to the off spinner in only the third ball he had faced, Samaraweera capped off a tour that has seen him at his worst. A series average of 13.16 and 79 runs, of which 49 came in one innings, is a far cry from the Samaraweera from the 2011 tour to South Africa. With two hundreds to his name in that series against the Proteas, much responsibility had been placed on him to return a similar result. Dimuth Karunaratne spoke about his senior team-mates lack of runs on tour.

"The things he is used to doing haven’t been successful for him in the last two or three innings. He tried to do something different. He tried to attack and get some runs, spread the field and then he could play his normal game,” Karunaratne said.

“I think in the next series he will come to the fore again."

The move to attack Lyon was a team plan, the 24-year-old opener said.

"The Aussie fast bowlers [bowled] really well in the three sessions. And they do the basics right, with line and length and set the field well. If we have a chance to get some runs, it’s against the off spinner,” revealed Karunaratne.

The strategy cannot be faulted, and it is one that teams use as a standard — to score runs off the bowlers they are most comfortable against or attack the opposition’s weak link. But with Lyon getting drift on a wicket that offered turn, Sri Lanka needed the senior batsman to have occupied the crease for longer before attempting such a shot.

By the time the seventh wicket fell, Jayawardene’s men had completed their latest act of fluffing up a good position to tumble from 130/1 to 202/7. Barring a minor miracle now from Dinesh Chandimal and the tail, Sri Lanka have gone from putting Australia under pressure to being whitewashed in the series.
Karunaratne also highlighted that Sri Lanka have not had luck on their side, and there is some truth to that. However, Sri Lanka were found wanting because of their inability to match the intensity of the opposition throughout entire sessions, and when they have, they appear to run out of steam too quickly. Whilst this Australian side might not rank alongside the great Aussie sides of the past, they are clearly a class too high for the flailing Sri Lankans. And that has remained the simple difference across all three Tests.

There is also another saying amongst pilots: "Any landing you can walk away from is a good one." Sri Lanka will once again walk away from this wreck just as they did in Melbourne, but the repeated crash landings reeks of bigger problems, which in the case of pilots and the aviation industry are investigated so thoroughly that they are even documentary-worthy. Sri Lanka will do well to invest time and effort into addressing their numerous issues, in what is sure to be a lengthy post-mortem.