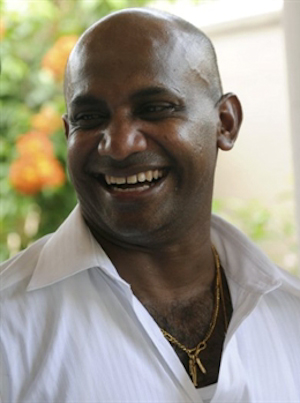 Sanath Jayasuriya is Sri Lanka’s most accomplished ODI player, and one of the best to have ever played the 50-over format. It is a sad reflection on Sri Lankan fans, that they are so quick to forget what he has done for Sri Lanka over the years, and so quick to shout themselves hoarse over manufactured indignation. Jayasuriya has his faults, but when I hear the vitriol regarding his appointment as the chief selector, I cannot help but wonder whether the problem lies with him or if the problem lies with us Sri Lankans. I get the questions, but not the tone. I get the concerns, but not the hysteria.

Jayasuriya is a Sri Lankan hero, universally loved, and a village lad made good. Before Muttiah Muralitharan came into the side, it was Jayasuriya who was the most beloved of our fans. If Muralitharan symbolised our unity in diversity and team spirit, Jayasuriya was a symbol of the equality and fairness of the Sri Lankan cricketing system, as well as a symbol of the Sri Lankan style of play. War analogies are perhaps overused in sports media, but if there was a time to use the word ‘massacre’ in sports, it was when Jayasuriya unleashed the power of his bottom hand, even ending careers at times. What a thrill it was to watch, what a joy to behold.

Jayasuriya has won more ODI matches for his country than any other cricketer anywhere, apart from the short man across the Palk Straits, and has more man-of-the-match awards than Mahela Jayawardene and Kumar Sangakkara combined. His strike-rate was exceptional for his time, and it meant that Sri Lanka always had a puncher’s chance of chasing totals that would have otherwise been out of reach. Let us also not forget the 300-plus ODI wickets he took, making him the third-highest wicket-taker for Sri Lanka in one-dayers. Jayasuriya’s contributions in Test cricket pales in comparison, but is significant nonetheless. The 43-year-old also led Sri Lanka competently for many years, and has a captaincy record that suggests he was Sri Lanka’s most successful captain in Tests and ODIs.

Over the last several years, Jayasuriya lost some of his luster due primarily to his political career and conflicts over his retirement. In both those instances, some of us were not being fair by him. It is very ironical that we criticise his political life, and then proudly say that we are kapuwath kola, or that we have been blue for generations. I wish that the green-tinted glasses are more able to separately crystallize Jayasuriya the politician and Jayasuriya the cricketer. The conflicts over his retirement meant that many of us were in the Jayawardene-Sangakkara team. I understand that. But I hope that it does not necessarily mean that we need to ridicule Jayasuriya.

When people claim that they are concerned about the impact Jayasuriya’s appointment will have on Sangakkara’s and Jayawardene’s careers, irony aside, I am hoping for a sense of magnanimity from the new chief. I am also of the view that there are more critical concerns for the chief selector, specifically the development of the new generation. As great as they have been for Sri Lanka, Sri Lankan cricket did not begin with Jayawardene and Sangakkara, and it will not end with them either. Our batting heritage is illustrious, from Sathasivam to Dias to Aravinda to Atapattu, and the future will be no different.

I do have my own doubts about Jayasuriya as the chief selector. I wish he had retired from politics, and served as a selector for a few years before becoming the chairman of the selection panel. I have never associated him with cricketing nous, but perhaps that was my perception due to the batting style he possessed, which relied more on brute force rather than timing and technique. His decision to participate in a dancing competition in India was not classy, but no one has offered me a million dollars to test the strength of my convictions. I am also certain that many of us have watched ‘Dancing with the Stars’ to really sit in judgement on this one. We are quick to disparage his political stint, but perhaps it is where he thought he would make the biggest contribution to his country, and it is an issue for the good people down in Matara to decide on. His retirement was painfully long drawn, but he is not the first, nor will he be the last great sportsman to bungle the timing of his retirement.

Sometimes, I cringe over his use of language during commentary, but I also grew to admire his insights and knowledge of the game. Before donning our superiority hats, let us not forget our own English language faux pas, which are just easier to live down because our stages are not so public.

To the suggestion that his appointment would “kill” Sri Lankan cricket, I can think of many more appointments far more deserving of that accolade. If a single person could destroy Sri Lankan cricket, it would have been dead and buried some time ago. Jayasuriya is not a fool in cricketing terms; he knows the game and can recognize talent. He would want his term to be successful, and being a fan-favourite, he has much more to lose in terms of popularity than others without significant popular backing.

Jayasuriya was first a cricketer before becoming a politician, and I am optimistic that it would be the driving force behind his selections. By his vast service to Sri Lankan cricket, he deserves a chance as the chief selector. The very least the fans can do is to give him a fair shot.