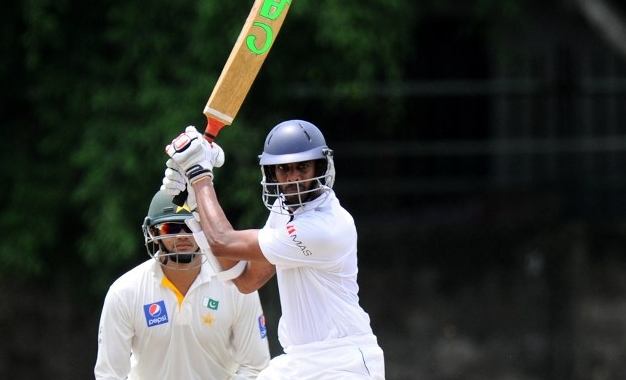 Jehan Mubarak's re-inclusion in the Sri Lankan squad has some fans seething. © AFP

As Adam Voges, the 35 year old Australian, raised his bat in jubilance after scoring a century on debut, I worried if it would help give another opportunity to Jehan Mubarak.

Mubarak last played a Test for Sri Lanka in 2007. Almost a decade has since passed. Sri Lanka have tested several youngsters in that time. Mubarak, despite being talented and possessing immense potential, became a failure, to the dismay of many. It's a poignant story, yet it could not have been any different.

Mubarak was handled poorly. He was largely given chances based on potential and was overlooked when in form. He deserved more opportunities and a lot of tolerance. Previous selectors played musical chairs with him and Mubarak too played a major role in engineering his own demise. Now, it is too late to go back and rectify those mistakes.

Sri Lanka can't worry about Mubarak's career or Mubarak the individual. Sri Lanka needs to blood its inexperienced players to beget the next Mahelas and Sangas, instead of attempting short-term measures to supplant the vacuum the senior duo's adieu will create.

Ian Chappell was cynical about Australia's decision to resort to the 35-year-old Voges, and Chappell alluded to it as an omen of a system that is failing to produce Test-quality batsmen.

"A commentator on the West Indies-Australia Test series cited the success of Adam Voges, with his debut Test ton at age 35, as an example of the strength of Australia's cricket. I'd argue the opposite," Chappell wrote on ESPNCricinfo.

"Australia's need to turn to an advanced-aged cricketer in Voges – and others like him previously – is an indication the system is failing to produce enough 'Test-match ready' young batsmen."

Chappell was vociferous about the 'pick 'em young and watch 'em flourish' theory. He also praised India's enormous faith in its young blood. This is something that is very much relevant to Sri Lanka, given the way the sport in the island is heading.

The SSC batsman Tharanga Paranavithana was axed mainly due to his age. During his career, where he constantly travelled overseas, Paranavithana fared reasonably well, but with Dimuth Karunaratne's arrival, the team understood the need to blood a youngster, and hence, prematurely terminated a decent career. It was a bold move wreathed in wisdom. At times, you need to sacrifice individuals for the sake of the team and the team is always bigger than any player.

Kumar Sangakkara, despite being the best Test batsman in the world, has decided to call it a day so that Sri Lanka cricket will have enough time to groom another youngster. He is fit and in a better form than any young player, but he clearly understands the need to look ahead at the future. But if an old horse like Mubarak is going to be given a chance to supersede Sangakkara, would it not then make a mockery of Sangakkara's retirement?

If experience is the major concern, then won't the 37-year-old Sangakkara, who is the best Test batsman in the world currently, a better choice than the 34-year-old Mubarak? What Sri Lanka needs is a youngster to replace Sangakkara.

Even if Mubarak is given a chance, he will play at the most for another three years. Sri Lanka will have to then begin another quest for a replacement. Sri Lanka need to show patience and maybe a few fruitless years will pass by, but then the young brigade will mature and produce more wins.

The good domestic seasons Mubarak has had should not force his comeback. How well he would fare overseas is still an enigmatic question.

Angelo Mathews is the captain now only because he was handed a Test match debut at the age of 22. Many criticized the move and Mathews failed to silence his critics initially, but six years on he is the only established young Test batsman in the side. As the adage goes: patience is bitter but the fruit is sweet. Australia's Steven Smith averaged just 23.37 in his first year in Tests and 37.42 in his third (he played only one Test in his second year). Now, he is the top-ranked Test batsman.

At the moment, most of the Sri Lankan youngsters are around the age of 25, and none of them have a guaranteed place in the side. Sri Lanka failed to groom youngsters when Sangakkara and Jayawardene were around, as the then selectors were playing roulette with the youth. Only a few places were up for grabs, and the younger breed jostled for places, which resulted in none getting a longer run with team. The outcome of that is now plain to see. Sri Lanka don't have a batsman ready to replace retiring seniors.

Mistakes were made and they must not be repeated, but two wrongs don't make a right either. Give youngsters more time to establish themselves and let's focus less on Mubarak's career.

Kusal Perera is fresh from scoring a spree of centuries. Kithuruwan Vithanage already has a Test century. There is a lot of promise in the form of Roshen Silva and Madawa Warnapura. When are we going to give them a platform to show what they have in their tank? Mubarak was given chances on potential and was ignored when in form. The same mistake should not be made with the younger players.

Perera is in blazing form. If Sri Lanka help him continue that in Test cricket, the confidence that he would gain would translate into ODI cricket. Sri Lanka will have a reliable batsman across all formats.

David Warner averaged in the early 20s in ODIs before he made his Test debut. The lessons Test cricket taught him made him value his wicket more in ODIs. His ability to play longer innings, coupled with his natural aggression, made him a dangerous opener in ODIs. If Perera is given a chance to play Test cricket, who knows? He might be able to resolve his problem of getting out after getting a start.

The left-handed opening batsman has already earned accolades from Ian Healey for his meticulousness behind the stumps and club with that his penchant for aggression, don't you see the Sri Lankan version of Gilchrist in him in Tests?

As far as Sri Lanka's bowling is concerned, Dilruwan Perera is a decent off spinner but there is menace in young Tharindu Kaushal's off spin. Now is a perfect opportunity to groom our next Test spinner under Rangana Herath's wings. Would the selectors take a safety-first approach, or would they be bold and take Sri Lankan cricket forward?

The current management is not ready to trust their own it seems. They appear reluctant to give youngsters more opportunities. Sri Lankan newcomers have not performed too badly to be reckoned as failures. How can the management feel they are incapable without allowing them to show what they are capable of? Any success has an element of risk associated with it, and any kind of risk has an element of faith associated with it. You don't get to live a trial life with your partner before you begin your marriage life (in the case of a typical Sri Lankan). The most influential phase of your life is forged on sheer trust and pristine faith.

Marvan Atpattu is the head coach despite having no prior experience because he was trusted. The current selection committee is incumbent because we invested a lot of faith in them. They need to show faith in our youth players and start trusting our own, if Sri Lanka are to have any ambitions of rising as a major force in cricket.