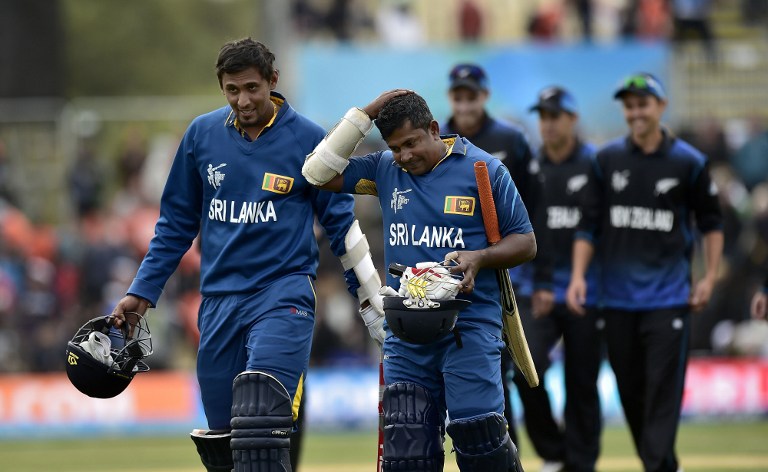 Sri Lanka were handed a 98-run thrashing in their first match. © AFP PHOTO

We are just a match into the tournament and Muttiah Muralitharan is calling for calm. Skipper Angelo Mathews says there is no need to panic. Muralitharan appears assured that Sri Lanka will qualify for the next round of the World Cup. There is however no guaranteed spot for Sri Lanka in the knockout stages — they must win to get there.

Sri Lanka have a history of choking sides like New Zealand with spin. But lately, perhaps because they've been too caught up with conditions in the southern-hemisphere, their medium-pace attack has been relied on too heavily. And they've been walloped regularly for 300-plus scores by a side that they have dominated with slow bowling for some time now.

The ODI series loss to New Zealand just prior to the World Cup should have given the team and management a wake up call. Yet, the World Cup opener just resembled another ODI from that series. Rangana Herath strangely did not even complete his full quota after bowling impressively, while Tillakaratne Dilshan and Jeevan Mendis too could have been allowed to contribute more with the ball. Sri Lanka's spinners were under-bowled in the opening match of the World Cup.

To think Sri Lanka has a competent enough pace attack to threaten any of the top sides in this tournament is somewhat foolish — they must return to a strategy that has worked for them for decades. A bulk of the bowling must be carried out by their slow bowlers regardless of conditions, and through containment will come scoreboard pressure and wickets.

Sure, this isn't the kind of positive thinking associated with champion sides, but positivity won't matter when you're on that flight home early from the World Cup, will it? There is nothing positive about bowling wide, but it helped win Sri Lanka a WT20 final, when the bowlers contained the Indians with wide yorkers. Similar thinking must be utilised here.

If the batting relies so heavily on the three seniors — Dilshan, Kumar Sangakkara and Mahela Jayawardene — then should one of those three not aim to bat until the end of the innings, playing a far more circumspect role than playing extravagantly in a risky manner? A less glamorous effort is required. A boring, old-fashioned innings, to ensure Sri Lanka bat well, could give them that dream farewell they seek.

When the three senior batsmen fall trying to dramatically alter the state of the game through attacking stroke-play, or when they are dismissed caught behind attempting to cheekily glide one past the keeper, one wonders if they understand the value of their wickets.

In the seven-match series against the Kiwis, apart from the senior trio, there was simply no consistent contributions from other batsmen. It is what it is.

Sri Lanka are not going to do well if Dilshan, Sangakkara and Jayawardene are dismissed cheaply, which is why important discussions must take place on how best to utilise them in the batting order. That cannot happen without winning over Jayawardene, who has stated publicly his desire to open batting in ODIs.

There is simply nothing to gain by forcibly demoting Jayawardene down the order. The decision must be his, and he must wholeheartedly agree to want to move down. When the rest of the batting is this brittle, it's important that one of the senior three are in the middle at the end of the innings.

A winning strategy requires every member of the World Cup squad to be willing to do everything it takes bring that trophy home. In 1996, Roshan Mahanama, who was an opener for much of his career (also opened in the years leading up to that World Cup), batted in the lower-middle-order. It proved useful to have a technically sound batsman that low down, when top order batsmen were sent back to the pavilion in a hurry. Mahanama and Hashan Tillakaratne, along with Arjuna Ranatunga, were able to stem the fall of wickets and rebuild.

Teams at the World Cup will know that hitting Sri Lanka hard with the two new balls at either end, in the first 10 overs, can essentially seal the game for them. Angelo Mathews aside, they will not view the rest of the batting as any serious threat after the three seniors are dismissed early.

Not bowling their spinners more and a top-heavy batting line-up makes Sri Lanka look pretty ordinary, especially when Dilshan, Sangakkara and Jayawardene don't score big, and that makes this side a less of a threat than others at the World Cup.

The status quo cannot remain if Sri Lanka are serious about winning this tournament. A first-round exit is also not entirely off the cards.