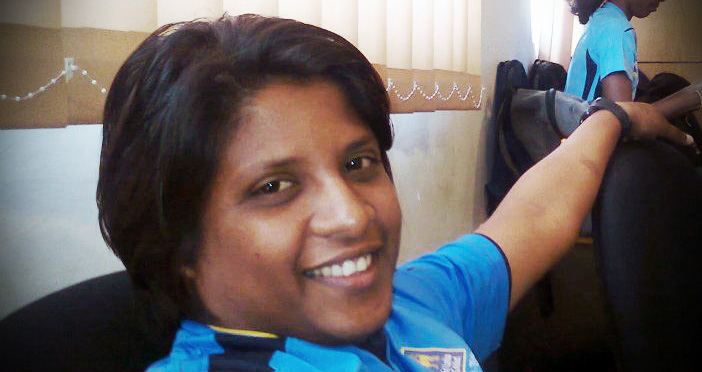 She wields her bat like a club, bashes the ball with no remorse and sends it soaring over the ropes. Her mightly hand almost engulfs the white sphere she hurls down at her opponents. And her appeals for lbw are vociferous demands rather than polite requests.

There are few sights in women’s cricket more menacing than Eshani Kaushalya going about her business on a cricket field. Watching the burly Sri Lankan all-rounder imposing her belligerent self on the World Cup stage, it’s difficult to imagine her being any different off it. Or to fathom that her aggression is nothing but a severe case of white-line fever.

The 28-year-old, far from being the bully that she portrays so effortlessly on the field, is in fact the exact opposite. She’s coy, soft-spoken and a sucker for romantic Tamil movies. Kaushalya is the joker in the Sri Lankan dressing-room, and she doesn’t mind being the butt of a few pranks herself.

Seated in her pink pyjamas and flicking her hair back nervously, Kaushlya presents a very different image to her on-field persona of being the face of pugnacity in women’s cricket. The Jekyll and Hyde shades are unmistakable.

"The cricket I play is straight from the heart. I give my everything out there, and that’s where the aggression comes from. I have been a big hitter from the time I started playing cricket," says Kaushalya, who averages 59 with the bat and at a strike-rate of 145.67.

While there have been other notable performances as well, Sri Lanka’s historic progress into the Super Six stage and their maiden ODI wins over England and India have been mainly orchestrated by Kaushalya’s match-changing cameos. Her 41-ball 56 against the defending champions took the Sri Lankans over the line, while her unbeaten 56 knocked the stuffing out of Indian hopes on Tuesday.

If anything, she’s epitomised the brave new world that women’s cricket in general seems to be heading towards, with her free-spirited displays on the field. She’s been a major threat with the new ball too, picking up crucial early wickets in both her team’s victories. Kaushalya’s dream show so far has won her fans worldwide, and she’s also brought a lot of joy to her friends and family back in her village near Panadura, in the outskirts of Colombo.

"The whole village has been watching the matches together. This is the first time they have seen me on TV and they’ve been bursting fire-crackers and the arrack is flowing," she said.

Until the age of 16, Kaushalya, the daughter of a soldier, didn’t even dream of playing cricket and it was only at the behest of her neighbour that she even made the trip to Colombo some 12 years ago to attend a coaching camp. And she still gets teary-eyed while talking about the many perils that her family has overcome to ensure that their daughter can focus on her cricket.

Kaushalya insists that knocking the hosts out of the World Cup left a bitter-sweet taste in the Sri Lankan camp. And it was a conscious decision from the senior players, including her, to avoid celebrating their win with excessive brouhaha. The team had expended their aggression in far more productive manner and Kaushalya could go back to being her gentle off-field self.

Bharat Sundaresan is a sports correspondent for The Indian Express.

This article first appeared in The Indian Express. It is republished here with permission from the author.