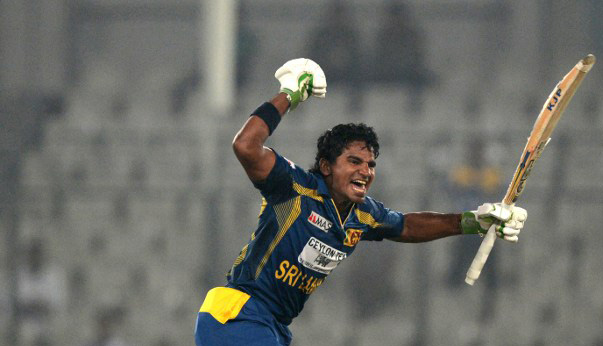 The exciting Kusal Perera has opened the batting of late, but he may not play at the WT20 if Tillakaratne Dilshan is fit. © AFP

The chairman of selectors Sanath Jayasuriya told reporters in Sri Lanka that Tillakaratne Dilshan had not fully recovered from an injury he sustained during Sri Lanka’s recent tour of Bangladesh. This may present an opportunity for a youngster in the team to secure a place as an opener with a solid showing at the ICC World Twenty20.

At the last two World Twenty20 tournaments, Sri Lanka have favoured Mahela Jayawardene as an opener to partner Dilshan, and if the selectors opt for a similar approach this time, the immensely talented Kusal Perera, who has opened batting for Sri Lanka in the 20-over format of late, would mostly likely spend a good part of the tournament on the sidelines.

Dilshan, who will accompany the Sri Lankan squad to Bangladesh on Sunday for the World Twenty20, has some discomfort when batting. If he recovers in time, the experienced opening batsman will play against the West Indies in a warm-up fixture next week to assess if he can take part in the tournament.

Perera has been in good form of late. The dashing opener finished the two-match T20 series against Bangladesh as the highest run-scorer of the series and registered his first ODI ton last month against the same opposition. Perera’s ability to clear the ropes with ease has made him a crowd favourite, but more importantly, with his rate of scoring he can take the pressure off Kumar Sangakkara and Mahela Jayawardene, the two seniors in the side who very often shoulder much of the burden.

There is no better replacement for Dilshan than Perera, whose strike-rate in T20 internationals nears 130. With broadcast records set to be broken, the World Twenty20 presents the 23-year-old with an ideal platform to make a name for himself, provided that Dilshan will indeed miss the tournament.

The stouthearted Dilshan, whose experience and all-round ability Sri Lanka often banks on, is unlikely to let even a fractured thumb get in the way of missing what may be his final World Cup appearance in this format. Despite his injury, the 37-year-old is bowling and fielding during practice sessions.