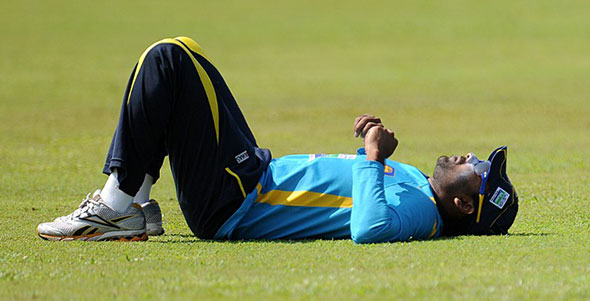 While the players are being pressured into taking yet another pay cut, SLC officials continue to plunder. © AFP

Sri Lanka Cricket (SLC) is struggling to make ends meet due to the present financial crisis, however, the executive committee has approved appointing a selector to accompany the team even for home series. The selector currently with the Sri Lankan team for New Zealand’s tour of the island is being paid a handsome daily allowance of US$100 in addition to five-star hotel accommodation. It is the first time in SLC history that a selector is accompanying the team for matches played in Sri Lanka.

After complaints from the selectors that their regular employment would be affected when travelling with the team, sources say, the initially suggested allowance of $50 per day was increased to $100, which is the same daily allowance paid to selectors for overseas tours.

Interestingly, the visiting New Zealand team does not have a selector accompanying the touring party. Many international teams do not send selectors on tour with the team, but the cash-strapped SLC curiously continues to stick to this patently unwise dissipation of SLC funds.

A selector will accompany the team for their 58-day tour to Australia next month, which will earn the fortunate selector $5800 in allowances. Apart from the daily allowance, the selector’s business-class airfare and hotel accommodation for nearly two months could amount to three times the total cost of his daily allowance for the tour and it will no doubt burden SLC’s finances further.

Apart from per-diem allowances when accompanying the team, selectors are paid $460 (approx.) as a monthly allowance, $150 (approx.) every month as a travel allowance for their personal fuel and transportation costs and nearly $40 per month towards their mobile phone bills. Appointing full-time, paid selectors — as Haroon Lorgat suggested in his recent report to SLC — may not cost a whole lot more than what SLC currently forks out for its selectors.

With today’s technology and the ability to converse free of cost via the internet, it is baffling that a selector needs to accompany the team on tours at such great expense.

This poor decision-making reeks of political foul play and puts to shame the wisdom of several wise men currently working with the team. Team manager Charith Senanayake, batting coach Marvan Atapattu, bowling coach Champaka Ramanayake and fielding coach Ruwan Kalpage have all represented Sri Lanka at the highest level and are competent enough to assist if ever the need arises for a selector to be physically present while away on tour. Furthermore, the team is blessed with the presence of coach Graham Ford, who has coached South Africa previously and has played first-class cricket, as well as trainer Mario Villavarayan who has extensive first-class experience to assist the squad with sound advice, if an issue with selection was to occur.

At an executive committee meeting last month, Nuski Mohamed, the current SLC treasurer, warned the board that it will struggle to meet day-to-day expenses from the second quarter of 2013. "Next year is a bit of a tough year for us," Mohamed told the Daily Mirror. "There are no inbound tours. We get the TV income only when there are inbound tours."

Despite these concerns, SLC seems uninterested in cutting down on unnecessary expenses, such as the wasteful pampering of selectors by sending them on joy rides.

"All current and future strategic and operational plans (including player payments) need careful review to ensure they are justifiable and focus on delivering the vision and strategy," Lorgat said in his report, highlighting the urgent need to put an end to the squandering of SLC finances.

Meanwhile, an SLC insider said that it was unacceptable that the board was wasting funds on selectors, while the staff at the cricket board have not seen salary increments in three years due to the board’s dismal financial standing. "Lorgat’s report has recommended appointing full-time professional selectors. That is a justifiable expense, but this is just a joke. What has the Sri Lanka team achieved by sending selectors on tours," he questioned.

The selector chosen to fly to Australia with the team next month was part of the selection panel that Atapattu described as "a set of muppets headed by a joker", when Sri Lanka last toured Australia for a Test series in 2007. Interestingly, one of the men Atapattu referred to when he bravely spoke out against the selectors five years ago will be flying with him to Australia, along with a touring party that consists of more than 10 officials (including support staff).

This selector has earned the title ‘perpetual selector’ and has been appointed an astonishing seven times as a selector and has held his post for a number of years. According to a source who wished to remain anonymous, this selector was allegedly the reason Amal Silva stepped down from the selection panel earlier this year.

Channaka de Silva is the sports editor of the Daily Mirror newspaper in Sri Lanka.