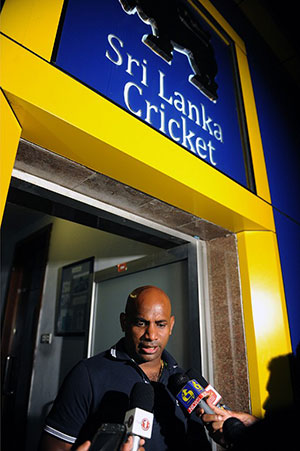 Sri Lanka’s sports minister Mahindananda Aluthgamage and the island’s cricket board officials have attempted to justify a reduction in the players’ wages by stating that a majority of SLC’s earnings goes towards paying the players. They however should be reminded that it is an important part of their job to ensure that the board finds ways to generate more revenue to revive SLC finances after the 2011 World Cup calamity, but their solution has been to take away a significant portion of earnings from the players — the primary source of what little money the board still makes.

For a team that has featured in a number of World Cup finals, Sri Lankan players are still some of the lowest paid amongst the top teams.

It is due to budget overruns during World Cup 2011 stadium construction that the board is in such a destitute state now, but the administrators responsible for the blunders that left SLC in millions of dollars in debt have not been held responsible. Some of the administrators directly responsible continue to contest in SLC elections and even still hold positions within the board, while enjoying various perks and allowances.

The recent standoff between the players and SLC saw the cricketers united in their stand against the board. It is after all the players who bring in the money, yet they are forced to pay the price for board officials’ blunders. It is therefore not surprising that they stood united in the face of such injustice.

There have been a number of issues pertaining to the new contracts, but the players are most affected by two: the withholding of fees paid to them by the ICC for the use of their images during ICC tournaments and SLC’s decision to dock their wages for their time at the IPL.

For cricketers who do not play in the IPL, like Rangana Herath for example, losing ICC fees may not seem so trivial, which is perhaps why many cricketers were reluctant to sign the new contracts.

The recent decision to not recognise the Sri Lanka Cricketers’ Association, as well as players’ agents and managers, was enforced conveniently in time for the signing of contracts, leaving the players without the ability to have their contracts explained to them by a representative of their choosing.

The attitude displayed by officials during the crisis was also pathetic. It should not be forgotten that Kumar Sangakkara was not allowed to play in the three-day warm-up match against Bangladesh, which was to be Sangakkara’s comeback game after injury. The entire fiasco appeared to be a cunning strategy designed to corner the players and force them into complying.

"It looks like SLC had worked for some time towards these negotiations, and had done a lot to secure a powerful bargaining position," Andrew Fidel Fernando, ESPNCricinfo‘s Sri Lanka correspondent, told Island Cricket. "The decision not to recognise player managers and players’ associations has helped tilt the scales in their favour, for example.

"Having done all that, they had clearly come up with an uncompromising hard-line strategy, and they rolled that out when the players refused to sign.

"I think the end result is a reflection of how much leverage the board had."

The Sri Lankan newspaper Daily Mirror first broke the story on the contract crisis. The paper’s sports editor Channaka de Silva said SLC could have resolved the issue much earlier, and not just prior to the start of a Test series.

"There were very clear signs of this happening," de Silva told Island Cricket. "SLC should have sorted this out early rather than waiting until the last minute."

"Washing dirty linen in public is not a creditable thing for a corporate organisation," he added. "It also raises doubts if SLC was purposely waiting until the last minute to gain an advantage over players."

He added that SLC’s current financial state has left the board with no option other than to tap into the players’ earnings.

"I heard they could only spend two percent on school cricket due to cash problems," de Silva said.

With the Test series against Bangladesh just days away, and SLC refusing to select players who had not signed contracts, the players have agreed to compromise. It is learned that they have agreed to sign their contracts for this year, but they hope to voice their concerns again when contracts are up for renewal.

Speaking to ESPNCricinfo, SLC secretary Nishantha Ranatunga confirmed that the players had indeed agreed to sign the new contracts, but admitted that "a full resolution hasn’t been reached."