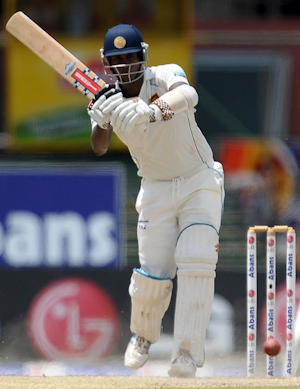 Who is Sri Lanka’s next cricket captain? Is it Angelo Mathews, Dinesh Chandimal, Thilina Kandamby or someone else? These questions have been doing the rounds ever since Mahela Jayawardene announced he would step down from captaincy during the recently concluded cricket series in Australia.

Although Mathews had been earmarked as captaincy material sometime back, made Jayawardene’s understudy and also granted the Twenty20 captaincy recently, his acquiring of the Test captaincy is doubtful now, especially after sports minister Mahindananda Aluthgamage’s remarks that Sri Lanka would adopt the policy of split captaincy.

Mathews is likely to be captain for the two shorter forms, but who will captain the Test team? Will it be Chandimal as is being touted or Lahiru Thirimanne? Or will it be Kandamby?

If the argument is that Mathews is not mature enough to handle the Test team, then questions arise as to what experience has Chandimal. There is no doubting Chandimal’s talents as a batsman, but can he handle the pressures of Test cricket? Both Chandimal and Thirimanne are still unproven in Tests, the most mentally challenging form of the game. They need to prove themselves in that form of the game first, and learn to play under pressure. Thrusting captaincy upon youngsters is not the right move, as undue pressure can hamper their progress and cut short their promising careers.

Kandamby, because of his experience in captaining Sri Lanka A, can step in as captain. But the question is, can he find a place in the Test side? Sri Lanka need to select their best players be it for Tests, ODIs or T20s, and captaincy must be handed to the most capable player. Appointing a captain sans much thought, to only later discover the captain is struggling to hold his place in the side, will be embarrassing.

What experience and knowledge in cricket does the sports minister posses to claim split captaincy is the best way forward for Sri Lanka? If he believes this is the right move for Sri Lanka because the Aussies are doing it, the English are doing it and the South Africans are doing it, he’s reasoning is not sound.

Why does a country ever need to appoint two different captains? The answer is simple: if your Test captain does not play short forms of the game – ODIs and T20s – then you need to have two separate captains. In Australia, Michael Clarke does not play T20s, therefore, he captains the Test and the ODI teams, while George Bailey captains the T20 team. Alastair Cook is England’s Test and ODI captain. Cook doesn’t play T20 cricket, so Stuart Broad captains the side in the shortest form. South Africa’s Test captain Graeme Smith doesn’t play T20 cricket, and that’s why they have a different captain for that format. Now, take the case in India — MS Dhoni plays all three forms of the game and captains all three teams. In the West Indies, it’s the same scenario.

Both Jayawardene and Kumar Sangakkara captained Sri Lanka in all three forms, as they were regular members of the sides that played in all three forms. When Aluthgamage, or the selectors led by Sanath Jayasuriya, say Mathews will only captain the ODI and T20 sides, the only conclusion we can come to is that he won’t have a place in the Test side. If he’s playing in all three forms of the game, he can very well captain all three sides. The only rational argument in favour of split captaincy in Sri Lanka’s case is the workload of players; captaining in all forms can be hugely demanding and very taxing on a player.

Split captaincy can make it harder for both captains to have full control of the team, and to imprint their style of leadership on the team. It may also create unnecessary tensions within the dressing room. What guarantee is there that such a scenario will not create factions within the team?

If the two captains have contrasting personalities, and their approach to the game is quite different, say one is quite aggressive while the other always looks to play it safe, then it may also create inconsistencies in the development process of the national team.