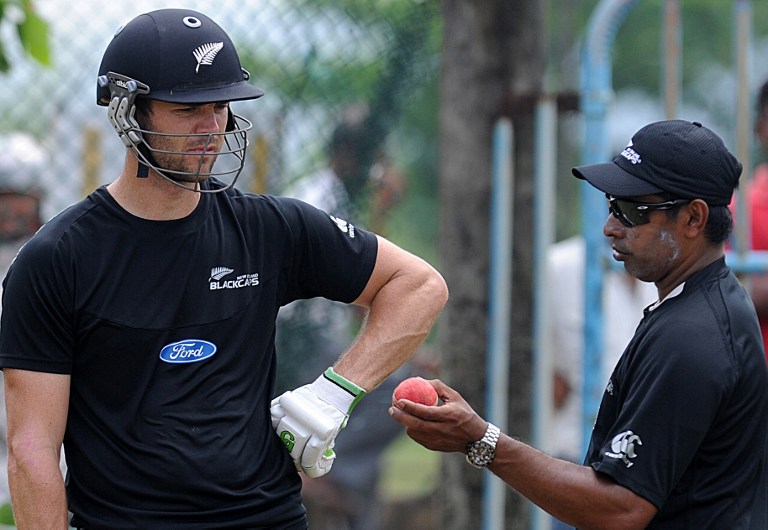 New Zealand gained from Chaminda Vaas's knowledge after hiring him in 2012. © AFP

The defeat against New Zealand didn’t come as a surprise after the thumping they received in the ODI series against the same opposition just prior to the tournament. Sri Lanka utilised the same strategies and tactics six times in the series but were successful only twice.

They cannot be blamed for over-relying on their bowlers because only four times have their batsmen crossed 300 since 2014. The run of victories in 2014 and the brace of wins in New Zealand came on the back of very good bowling.

It is no surprise that the team management and the captain were critical of the bowling performances in the World Cup opener. Sri Lanka want their bowlers to restrict the opposition for under 280, in order to allow their batsmen to construct a successful chase, but whenever the bowlers leaked more than 300 runs, the team has failed to chase it down.

Even though bowlers are expected to keep sides down to a modest total, are they the only ones to blame for recent defeats? With most teams successfully chasing down 300-plus scores, should the batting not be scrutinised for failing to put up hefty scores?

The problem in the batting line-up became apparent in the series against India, when the team could only muster scores of 194, 274, 242, 251 and 286, on flat decks where Rohit Sharma scored 264 by himself. The management surely must have realised the impotency of their batting line-up back then? But Sri Lanka circumscribed themselves to 'not panicking', and carried on with the same in the the series against England.

When England played no specialist spinner in most games in that series late last year, Sri Lanka employed three spinners and a spin-bowling all-rounder. The spinners spun webs around the English batsmen and the home team clinched the series 5-2. Was Sri Lanka expecting spin-friendly conditions at the World Cup?

In New Zealand, there were some hasty changes made to the batting order, yet the team relied a lot on their slow bowling phalanx. The pitch responded to spin only in one game, and Sri Lanka won that game comprehensively, but in swinging conditions and on good batting tracks, the bowlers failed and so did the team. The poor bowling and fielding has attracted criticism from various quarters, but no one has pointed to the batting as a reason for the team's losses.

I am not sure how far the tainted management played a part in brushing the batting woes under the carpet by pointing fingers at the bowling attack. Chaminda Vaas was accused and was almost stripped of his position as bowling coach, while the batting miseries never came into the limelight. Is it because it's the brother-in-law of the secretary of SLC who is responsible for the batting?

Rumesh Ratnayake was recruited at the very last minute as a fast-bowling consultant for the World Cup, but has the bowling improved since his hiring?

Is there any justification in demanding the bowlers to do the donkeywork on good batting tracks? When most teams regularly score runs in excess of 300, should it not be our batsmen who should be blamed for their substandard performances?

It is indeed good to see Sri Lanka not panicking. Panic has not set in, but does that mean they can be allowed to continue being oblivious to their mistakes?

They may not have the team to win a World Cup, yet the hope is for Sri Lanka to perform miraculously well, just as they have done in prior ICC tournaments, but hope is fading after the huge defeat to New Zealand in the first game. Fans are losing faith. Some, including me, are predicting a first stage exit for the team. But it is not too late.

If Sri Lanka stop being stubborn about their batting order and forgo their misplaced, unjustified, eternal trust on a failing middle order, they may still go all the way in this tournament. Three good games at the business end is all what is required.

The first five games of the World Cup exemplify Sri Lanka’s problems: In the first innings of the first five games, the middle and lower order (numbers 5, 6, 7 and 8) have scored a total of 802 runs at an average of 66.8 and a strike rate of 119.06. In comparison, Sri Lanka’s lower order could only score 311 runs in their last 7 innings. That accounts for an average of 12.96 and a strike rate of 66.86. When quick runs are needed at the death, the Sri Lankan lower order scores only 66 runs per 100 balls.

But the most important stat of all is the percentage of runs scored during the first 35 overs and the last 15 overs.

Most teams have struggled with their top order in this World Cup in the pool stages. South Africa were four down for 83 before their lower-middle order lifted them. Australia were three down for 70 prior to the combined effort of the lower-middle order, which took them to a score of 342. West Indies were 87 for five, before Darren Sammy and Lendl Simmons launched a savage attack to take their team to a score of 304.

Sri Lanka do get off to good starts, with a strong platform set by the 35th over of the innings to have batsmen go berserk at the death, but the initiative is often squandered by an impotent lower order. This problem has plagued Sri Lanka for some time now, but strangely, fast bowling coach Vaas is blamed. When fingers are pointed at fielders and bowlers for their horrid performances on flat decks in India, why are batting failures on those flat tracks not equally to blame?

It is important to note that Dale Steyn, arguably the best bowler these days, went at 7.11 runs per over against Zimbabwe (of all oppositions). James Anderson leaked 6.7 runs per over. Expecting our bowlers to contain teams is a preposterous strategy.

The problem lies with the lower order. There is no point censuring the selections now. Yes — Sri Lanka's best 15 are not at the World Cup, but a bit of intelligent improvisation can certainly counter their problems.

The best batsman needs to be picked for every batting position. The team should think about what works for the team, rather than what works for a particular batsman.

Tillakaratne Dilshan's more subdued style of play of late may work out better in the middle order. © AFP

Before you read further, let me warn you that I am going to adduce a tendentious batting order.

There is a need for more boundaries in the slog overs, therefore, batsmen capable of hitting boundaries must bat at 5, 6 and 7.

Thisara Perera has the best Balls Per Boundary ratio (BPBR) but he has been unreliable of late, while Jeevan Mendis has the third best BPBR but he is an inconsistent bits-and-pieces player. Both Perera and Mendis find themselves excluded in my XI.

Tillakaratne Dilshan has the second-best BPBR, and so he should occupy a slot in the middle order. In the first game, Dilshan lacked the fluency that Thirimanne possessed, and the story has been the same from him for some time. A more fluent scorer at the top will ensure Sri Lanka are not bogged down early. Dilshan was a decent finisher for Sri Lanka before being promoted to open, and he is the only batsman capable of hitting big, along with Angelo Mathews, in the Sri Lankan line-up.

Mahela Jayawardene has scored a boundary per 7.8 balls since the dawn of 2015. His ability to pick gaps would help Sri Lanka score fast at the death, which is why he should drop down a place to No. 5.

Mathews is the best in the business when it comes to finishing games, and he should bat at 7. The lower order’s composition: Jayawardene at 5, Dilshan at 6 and Mathews at 7.

Dimuth Karunaratne batted well at number 4 in the warm-ups, hence playing him at number 4 is a prudent way of making the best use of him. In his role as an ODI opener, Thirimanne has regained the touch he showed at the Asia Cup last year — he should continue opening.

The only two remaining batsmen are Dinesh Chandimal and Kumar Sangakkara. The former has opened the innings twice in the past, but since it is not certain as to how he would fare against the moving ball, Sangakkara will have to open with Thirimanne. Yes, there is the risk of losing our best batsman very early, but, Sangakkara generally comes in as early as the second over in most games because he bats at No.3. And Chandimal should bat at three.

This batting order will also afford the youngsters time to settle down before accelerating — both Chandimal and Thirimanne are capable of scoring more than run-a-ball when settled — so this line-up ensures experience at the death.

Are they proactive and courageous enough to address this?