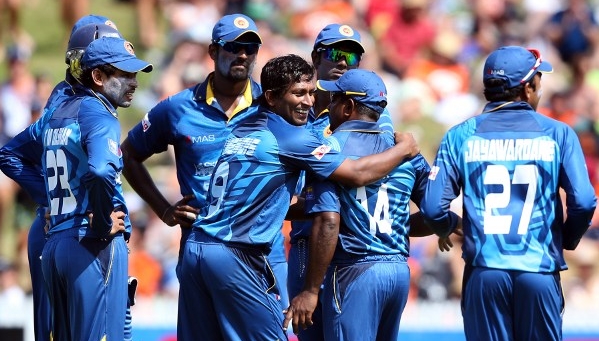 With the World Cup around the corner, nearly everyone seems to have an opinion about the Sri Lankan team's chances. Most are slightly negative at the moment. Given how the team performed in New Zealand that is hardly surprising, but it must be noted that, with the exception of 1999, Sri Lanka have punched above their weight in previous 50-over and T20 World Cups. Sri Lanka were never really considered favourites to win in any of the previous editions.

During these World Cup campaigns, the cricket administration in Sri Lanka has been in turmoil more often than not, with contract issues and petty behaviour from cricket board officials. Yet, the team as a collective, have found ways of going the distance in these ICC events. There is something about the larger stage that brings the best out of them.

So, what about this time? My guess (and a heartfelt wish) is that Sri Lanka will do the same again. They have the uncanny ability to rise to the occasion when it counts the most. All though New Zealand have gotten the better of Sri Lanka during the recent ODI series, come the World Cup opener, it will be a different story.

While it's a bit hard to look beyond the series loss in New Zealand (poor team selection and the absence of Lasith Malinga are partly to blame), there are some real positives.

Apart from Angelo Mathews, the three seniors scored heavily in the ODI series. The opening partnership in the final few games was decent too. While none of them were blazing starts, it appears there is a deliberate strategy of preserving wickets and seeing the new ball off. Tillakaratne Dilshan is regularly looking to play a longer innings these days as well. A good opening partnership, albeit a slow one, has helped set the platform for a competitive score, as evident in the fifth and seventh ODIs. When Sri Lanka failed to reach a match-winning score, it was largely due to the wheezing middle order who couldn't capitalise on the platform laid by the top.

Rangana Herath bowled acceptably in conditions that didn't assist him, while the pace bowlers performed well but struggled in the death overs. With Malinga in the mix, it could be a different story.

Sri Lanka's fielding was decent, but crucial catches were dropped throughout the Test and ODI series, which had a massive impact on the final outcome.

In New Zealand, the side's main characters played their part. It's the supporting cast who have not delivered. This is a big concern. Most of the juniors failed to contribute, with Lahiru Thirimanne being the only exception. Thisara Perera has been absent with the bat, but has bowled decently in the middle overs, yet had a complete meltdown under death overs pressure and went for plenty.

Jeevan Mendis has been disappointing. He did bowl well occasionally — yes, but most of the time he was cannon fodder. Mendis did not contributed with the bat either. Along with Mendis, Sachithra Senanayake too didn't do well, but in helpful conditions (Sydney or Adelaide) he is more reliable than Mendis. One can understand why Mendis was selected: There is a theory that leg spinners do well Down Under. Mendis though is not the right leg spinner, at least going by what we have seen so far.

Dimuth Karunaratne has largely been a passenger. He wasn't used at all during the latter half of the series. The chairman of selectors Sanath Jayasuriya has accepted that Karunaratne was a wrong selection.

As for Dinesh Chandimal, one can only feel bad for him. He has yet again been forced to bat in a position that does not compliment his abilities.

Chandimal is best-suited at three or four, and both his ODI centuries have come at the top of the order. Like Kumar Sangakkara, Chandimal needs time to get going — he is an accumulator of runs at the very start of his innings, but has the capability of accelerating later. In his current position, he walks in during the batting power-play, or at the death, and is forced to up the scoring rate right from the get-go. He tends to consume too many deliveries, putting pressure on himself and the team as a result, and then gets out to an ugly slog.

Since the seniors are settled in their positions, it's hard to imagine Chandimal getting an opportunity at the top until they retire, or unless an injury creates an opening for him. One possibility is to slot him between Sangakkara and Mahela Jayawardene at four. Arjuna Ranatunga is adamant this is the best approach. Jayawardene is skilled enough to bat during the power-play or the latter stages if required. Unfortunately though, he has clearly stated his preference is to bat as early as possible: in fact, he wants to open. Pushing him further down the order will make him unhappy, thus it is unlikely.

How can Sri Lanka ensure they go the distance in this World Cup? Seven batsmen and four frontline bowlers will be the best approach.

The current strategy of three frontline bowlers has backfired spectacularly. The New Zealand middle order took full toll of the part timers. The Kiwis recovered from 100-odd for five and went on to make very formidable totals in two occasions. Perhaps Malinga is the missing piece, but even with Malinga in the side, getting 20 overs from bits-and-pieces bowlers will not work against good teams.

If we play four frontline bowlers, both Mathews and Dilshan can cover the fifth bowlers' quota, with Mathews doing more in conditions better-suited for fast bowling and with Thirimanne perhaps chipping in. Thirimanne bowled well when conditions offered swing and seam, while Dilshan was more economical and incisive than Jeevan Mendis or Senanayake.

The ideal combination would be: Nuwan Kulasekara, Malinga and Shaminda Eranga/Prasad, along with Herath or Senanakaye (Herath preferred) being the lone spinner. In helpful conditions for fast bowlers, perhaps all four fast bowlers (with Dilshan being relied upon for a bit of spin) can play, and in Sydney and Adelaide they could consider playing both Herath and Senanayake, together with Kulasekara and Malinga.

In terms of batting, if one of the three seniors are still at the crease after the 35th over, Sri Lanka will be in a good position. It will set the stage for Mathews to up the scoring rate.

The Sri Lankan line-up lacks a Corey Anderson-type player, as Perera has failed to be consistent. It is more prudent to not plan for a late scoring surge and instead play to our strengths. Loosing wickets in a heap in the power-play and latter overs was a regular occurrence in New Zealand. Perhaps Sri Lanka can score more in the end by being a bit more conservative and using up the full 50 overs, with at least one recognised batsman in the middle.

There seems to be a widespread acceptance among fans and pundits that the selections for the World Cup squad were poor. The chief selector himself agreed mistakes had been made. If changes are going to be made, then Karunaratne must be replaced with Kusal Perera, Eranga must be brought in for Prasad and Dushmantha Chameera for Mendis.

Karunaratne is a non-factor even when slotted into the playing eleven. He offers very little flexibility, as he has no bowling or specialised fielding skills. Kusal Perera, on the other hand, has played well in Australia previously and is a good power hitter anywhere he bats. Even if he gets 15-20 runs, he will get them fast. He is also a much better outfielder than Karunaratne. When he is not in the playing eleven, he can still contribute as a substitute fielder, which makes him a valuable addition in the squad.

If Kusal Perera plays, it is unlikely we will see the opening combination of Thirimanne and Dilshan changed. He can be slotted in the lower middle order (where he has played before) and could take up Mendis's spot, or even Chandimal's place, as Kusal Perera is better-suited for that position than Chandimal.

Prasad hasn't done much and is prone to injury, and Eranga and Chameera are wicket-taking options. Both bowl fast and can be very handy on bouncy Australian pitches.

Most Sri Lankans are extremely supportive of the team, and I strongly believe the heartfelt wishes and unwavering support of the fans inspires them to do well at global tournaments. The players understand, whatever happens, the fans will continue to support them, unlike our neighbours. I wish the very best for our team and sincerely hope we go all the way.