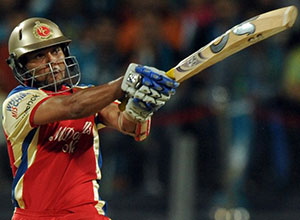 The IPL governing council’s decision, requesting teams to not select players from Sri Lanka for matches played in Tamil Nadu, tells us clearly that Sri Lankan cricketers are not wanted in India by parts of their population and the IPL fears for their safety in a part of India that has seen attacks against Sri Lankans and self-immolations.

Tamil Nadu’s chief minister J. Jayalalithaa wrote to the Indian prime minister last month, stating that there was "great angst and anguish amongst the people of Tamil Nadu", when it came to issues relating to the war in Sri Lanka and the alleged mistreatment of the Tamil minority in Sri Lanka.

"In such a hostile and tense environment, we apprehend that the participation of Sri Lankan players in the IPL tournament, with many games to be played in Chennai, will aggravate an already surcharged atmosphere and further offend the sentiments of the people," she went on to state.

"The BCCI may be advised by the government of India to prevail upon the IPL organizers not to allow Sri Lankan players, officials, umpires and support staff to take part in the tournament in Tamil Nadu. The Government of Tamil Nadu will permit IPL matches to be held in Tamil Nadu, only if the organizers provide an undertaking that no Sri Lankan players, umpires, officials or support staff would participate in these matches."

While the chief minister harbours extremist views and propagates it openly, her many thousand other foot soldiers could be perceived as the real threat. They may feel they need to carry out an act of violence against Sri Lankan players and match officials at the IPL.

For a team that has experienced an armed terrorist attack before, no threat can be taken lightly.

Avoiding travel to Tamil Nadu is wise, but there’s nothing preventing Sri Lankan players from being harmed outside of India’s southernmost state, which then raises questions over their safety in any part of India.

With the vast sums of money involved, it’s no surprise that Sri Lankan cricketers have chosen to travel to India, regardless of the anti-Sri Lankan sentiments there and despite being barred from playing in Tamil Nadu, but was it a wise move?

[ POLL: Are Sri Lanka’s cricketers safe at the IPL? ]