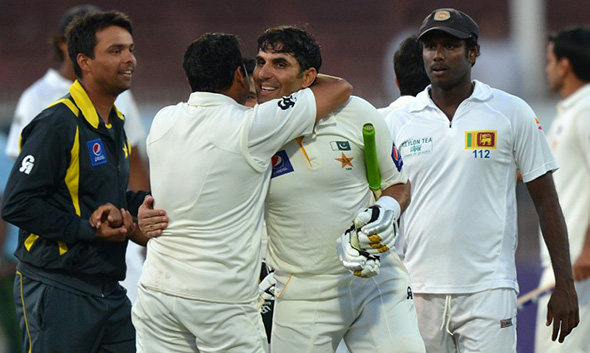 Sri Lanka lost the opportunity to register their first Test series win away from home in decades against a quality opposition, and went from a position of victory to a slap-in-the-face defeat within a few hours in Sharjah on day five of the third Test against Pakistan. They succumbed to a team that played with more courage, who were unafraid to take risks, and played a more positive brand of cricket.

Angelo Mathews’ men, on the other hand, were largely looking to draw the match, and their slow scoring rate, in an attempt to waste as much time as possible, came back to bite them in the posterior later. They may well have still won the series 1-0 and drawn the final Test, had they focused on making runs instead of utilising negative tactics, which will certainly torment Mathews for many years to come.

Pakistan had nothing to lose. It didn’t matter to them if they lost the series 0-1 or 0-2, which is why Sri Lanka needed to bat them out of the game with a massive lead, but that was never on the cards with their slow scoring-rate.

Some would argue though that a 300-plus lead was sufficient, and that Test cricket is not about scoring at a rapid pace. Pakistan also deserved to win because of their approach during the run-chase on the final day — they played with intent when it mattered.

Meanwhile, Mathews did not blame his negative approach on the loss.

"When we were batting, we actually kept losing wickets and we never got a good lead," Mathews said. "Prasanna Jayawardene responded to pressure and batted brilliantly, but I thought we should have been a bit more cautious because we’ve already won the series, and we didn’t need to give them a sniff.

"That’s what happened in the morning today, when we let our guards down for a couple of hours. We just couldn’t bat for another hour. That’s all we needed. Our batters were not very patient in the second innings and that brought our downfall."

Mathews suggested Sri Lanka should have been more cautious, and not have taken risks. It wasn’t negative enough for him, their batting performance. This is typical of the thinking associated with teams who are not accustomed to winning, and a captain who is fearful of losing.

Sri Lanka shared the two-match T20 series one-all, lost the five-match ODI series 3-2 and failed to win the Test series, which was well within their grasp. It would go down as a disappointing tour.

With a Test series against Bangladesh coming up, this side will be tested; even against a team ranked lower than them. This loss, thanks to Sri Lanka’s conservative approach, would have shaken them to the core.